Ratcliffe, Red Knights or wildcard - who might buy Man Utd? 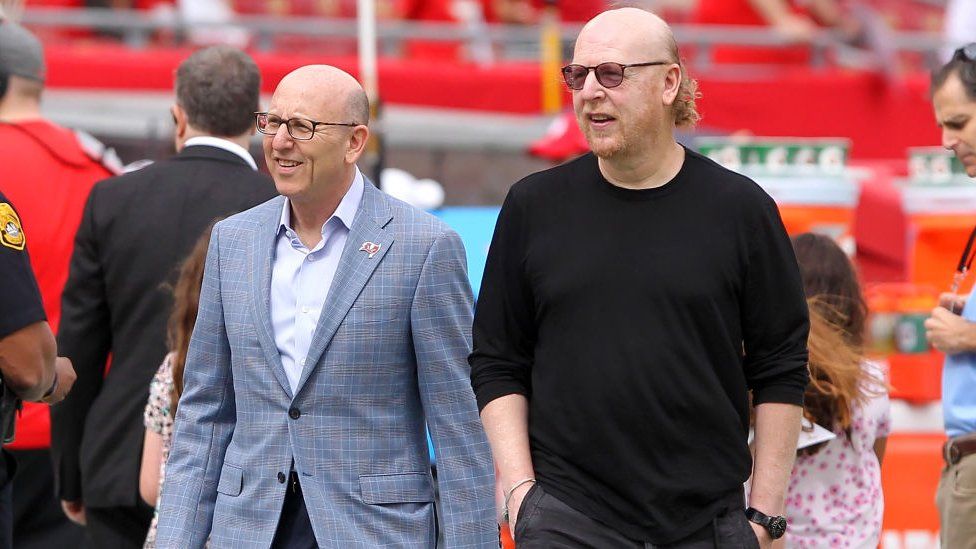 Manchester United, one of the world's biggest football clubs, is potentially up for sale with its owners considering their options.

The Glazer family, who bought the club in 2005 for £790m, say they are exploring "strategic alternatives".

It is thought they could sell it for £4bn-£4.5bn, though some have suggested higher sums.

The move has been welcomed by fans, who have protested for years against the American family's ownership.

One of the UK's richest men, Sir Jim Ratcliffe is one of a few names to regularly be mentioned when it comes to a potential takeover of Manchester United.

He first declared his interest in buying the club in August, with a spokesman for him saying: "If the club is for sale, Jim is definitely a potential buyer."

Sir Jim is a fan of the Red Devils, which will appeal to supporters disenfranchised by the current owners' perceived lack of investment in the club's facilities and team.

He made his fortune through buying up and turning around cast-off parts of other businesses. From operations once owned by the likes of oil giant BP, Sir Jim created a company - Ineos - whose chemicals and raw materials go into nearly everything we touch every day.

The Sunday Times Rich List lists him as the 27th wealthiest person in the UK, with a total wealth of £6bn, though Forbes puts it at just under £11bn.

The Lancashire-born businessman would be the fans' choice, according to football finance expert and author Kieran Maguire.

"He has openly said he had discussions with the Glazers earlier this summer," he says.

But Sir Jim has not commented or signalled his intentions following the Glazers' announcement on Tuesday and Mr Maguire says the Ineos founder is "less likely" to pay over the odds for the club.

Jim O'Neill and the Red Knights

Lord O'Neill led the so-called Red Knights group of investors that tried to buy the club back in 2010.

A United fan like Sir Jim Ratcliffe, Lord O'Neill told the BBC that whoever owns the club "needs to understand what they're taking on" and have "some proper purpose and culture behind what they're trying to do".

Asked on the BBC's Today programme whether he just needed to raise £4bn to buy the club, Lord O'Neill didn't rule out tabling a bid.

Lord O'Neill was a boss at investment bank Goldman Sachs from 1995 to 2013, spending most of his time there as chief economist.

US owners and companies buying stakes in Premier League clubs has been a big talking point in the game and what the future holds for it.

According to research by consultancy Deloitte, the US has been the source of more than two-thirds of investments in Europe's biggest leagues over the past five years, with an "influx of private equity interest".

Steve Gans, a sports lawyer and partner at the Boston firm Prince Lobel, who also previously worked with Liverpool's owners Fenway Sports Group, says a lot of American private equity firms want to invest in international football because "if they own other American sports that are uniquely American, they feel like they have saturated the market".

"They see an unlimited market worldwide [with football]. The Premier League sells its TV [rights], it's 205 territories and countries around the world, that's an astounding market and these owners believe they can reach something that they can't reach with traditional American sports," he adds.

Mr Gans also says firms believe they have the marketing techniques to "make those clubs grow digitally and otherwise to a stratosphere that they are not at now".

But more American investment might not be welcomed at Old Trafford, with club legend and commentator Gary Neville, saying in the summer that rumours of a part sale to US investment fund Apollo would be "totally unacceptable".

Buyers from the Middle East

There have been a few high-profile takeovers of European clubs from investors linked to sovereign nations.

Manchester United's rivals Manchester City are owned by the Abu Dhabi United Group, while Newcastle United have recently been taken over by a consortium led by Saudi Arabia's Public Investment Fund.

Paris Saint-Germain are owned by Qatar Sports Investments and there may be other Gulf nations interested in Manchester United.

Football finance expert Mr Maguire told the BBC there were countries in the region that have "access to funds that could be used" to meet the Glazers' high price.

However, as widely reported, such deals can lead to moral and ethical dilemmas for supporters.

Elon Musk, a man rarely out of the headlines at the moment, sent the football world into a frenzy in August when he tweeted that he was buying Manchester United.

However, the thought of Mr Musk branching out from Tesla and now Twitter into football was short-lived.

He later clarified his tweet was a joke, but after his back-and-forth deal for Twitter, who knows what the future holds?

When will a sale happen?

In short, we don't know if the club will actually end up being sold. The Glazers are considering multiple options, "including new investment into the club, a sale, or other transactions involving the company".

Sports lawyer Mr Gan reckons one can never know what will happen in these situations, but highlights the fact United's owners have hired a major investment bank to handle the current situation "certainly suggests they are testing the waters".

"I think it's a major step but we can't know that it's going to result in a sale," he adds.