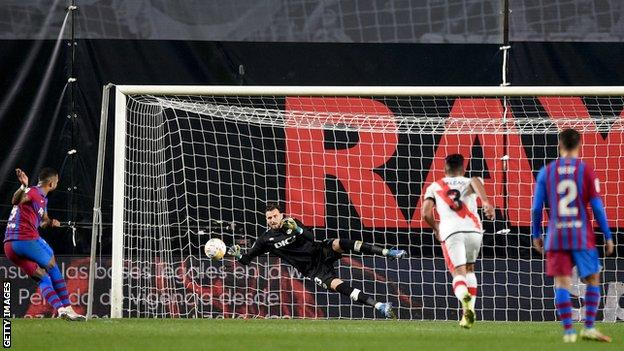 Memphis Depay has missed nine of his 36 penalties including shootouts

Memphis Depay missed a penalty as Barcelona lost at Rayo Vallecano to increase the pressure on Ronald Koeman.

Barca, defeated 2-1 at home to Real Madrid on Sunday, are ninth in La Liga.

Oscar Trejo won the ball from Sergio Busquets and fed veteran striker Radamel Falcao, who finished via the inside of the post for the only goal.

The visitors won a penalty when Oscar Valentin fouled Depay but his spot-kick was well saved by Stole Dimitrievski, who also smothered the rebound well.

Radamel Falcao: One of La Liga's most prolific scorers is a hero again

It is the first time since September 1987 that Barca have lost three away games in a row without scoring - a run that saw English manager Terry Venables sacked.

Barca boss Koeman - whose car was surrounded by angry fans after losing El Clasico - admitted before this game his side "cannot afford back-to-back losses".

Trejo, perhaps sensing Barcelona's fragile mental state, tried to score from the halfway line in the third minute but his shot was saved by Marc-Andre ter Stegen.

Barca were uninspired yet again, with Depay's penalty their only shot on target.

This is their fifth defeat of the season in all competitions and they sit six points behind leaders Sevilla and Real Sociedad.

Rayo - who have won all five home games this season - rise to fifth, above city rivals and champions Atletico Madrid.

Attempt missed. Gavi (Barcelona) right footed shot from the centre of the box is just a bit too high. Assisted by Sergio Agüero with a cross.

Attempt missed. Sergio Agüero (Barcelona) header from the right side of the six yard box is close, but misses to the right. Assisted by Sergiño Dest.

Attempt missed. Alejandro Catena (Rayo Vallecano) header from the centre of the box is just a bit too high. Assisted by Unai López with a cross following a corner.

Memphis Depay (Barcelona) wins a free kick in the defensive half.

Attempt missed. Luuk de Jong (Barcelona) right footed shot from a difficult angle and long range on the right is too high. Assisted by Sergio Busquets.

Attempt blocked. Yusuf Demir (Barcelona) left footed shot from the centre of the box is blocked.

Iván Balliu (Rayo Vallecano) wins a free kick in the defensive half.