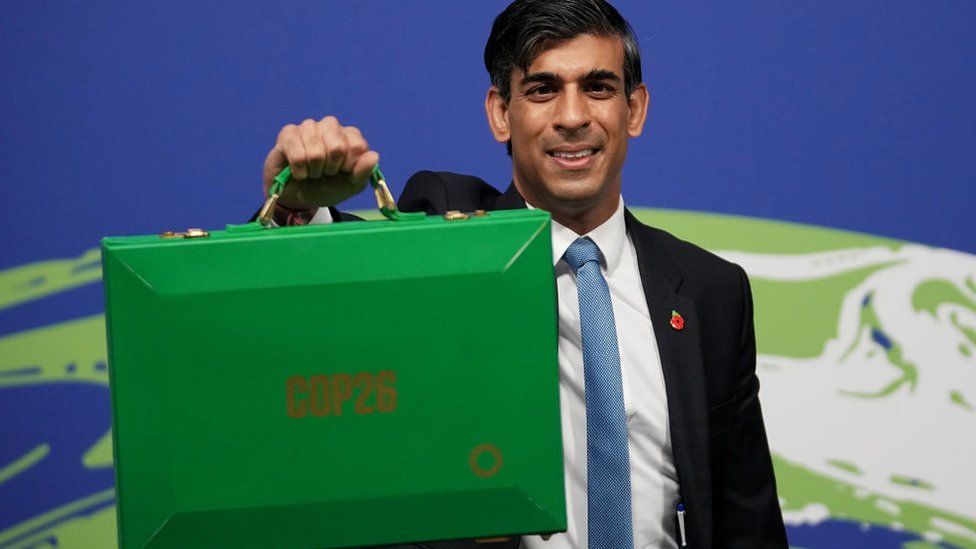 Rishi Sunak attended COP26 in Glasgow last year, when he was chancellor

PM Rishi Sunak has been accused of "a failure of leadership", after No 10 said he would not attend the COP27 climate summit in Egypt next month.

Opposition parties and environmental groups said the decision suggested the government was not taking the climate crisis seriously enough.

Downing Street said the PM had "other pressing domestic commitments including preparations for the autumn Budget".

Mr Sunak's predecessor Liz Truss had been due to attend the conference.

A Downing Street spokeswoman said the UK would be represented by outgoing COP president Alok Sharma, and other ministers.

"We remain committed to net zero and to leading international and domestic action to tackle climate change. The UK is forging ahead of many other countries on net zero," she added.

"We will obviously continue to work closely with Egypt as the hosts of COP27 and to make sure that all countries are making progress on the historic commitments they made at the Glasgow climate pact."

COP27 will take place in Sharm el-Sheikh from 6 to 18 November - finishing the day after Chancellor Jeremy Hunt is due to set out the UK's tax and spending plans.

Labour said the decision for Mr Sunak not to attend was "a massive failure of climate leadership".

Shadow climate change secretary Ed Miliband told the BBC: "You've got world leaders from around the globe gathering together to talk about how we can tackle the biggest long-term threat we face [...] and our prime minister can't be bothered to turn up.

The Liberal Democrats also criticised the decision, with leader Sir Ed Davey saying it "flies in the face of the UK's proud tradition of leading the world in our response to the climate change".

Green Party MP Caroline Lucas said: "The new PM's decision not to attend COP27 makes a mockery of any government claims on continued climate leadership - and what a shameful way to end the UK's COP presidency."

The summit in Egypt is expected to focus on three main areas - reducing emissions, helping countries prepare for and deal with climate change, and securing technical support for developing countries for these activities.

The news that Mr Sunak will not be attending comes as a UN report warns there is "no credible pathway" to keep the rise in global temperatures below a key threshold of 1.5C.

Scientists believe that going beyond 1.5C would see dangerous impacts for people all over the world.

On Wednesday, UN Secretary General Antonio Guterres told the BBC that he would like to see both the PM and King Charles in attendance. Now it looks like neither will be there.

Given that the UK government was not just the host of COP26 but the main driving force behind its limited successes, it is unusual that it will not have a major political figure in attendance.

While Alok Sharma will be there as the outgoing COP president, he is not of the same rank as a prime minister or monarch.

The Egyptian organisers will likely be furious at this turn of events - and it will not augur well for the conference if the leaders of one of the world's leading lights in taking action on climate can't prioritise travelling to the gathering.

Meanwhile, No 10 have confirmed Climate Minister Graham Stuart - who was reappointed to the role in Mr Sunak's reshuffle - will no longer attend cabinet,

Last month, under the Truss premiership, the government announced a review of the UK's target to achieve net zero carbon emissions by 2050.

Former Energy Minister Chris Skidmore was tasked with leading the review "with a focus on ensuring the UK's fight against climate change maximises economic growth, while increasing energy security and affordability for consumers and businesses".

Last year's Glasgow summit was attended by then-Prime Minister Boris Johnson, as well as Mr Sunak when he was chancellor.

More than 200 governments have been invited to COP27. However, some leaders of major economies are not expected to attend, including Russian President Vladimir Putin.

US President Joe Biden is planning to go, but China has not yet confirmed if its leaders will participate.

Earlier this month, Buckingham Palace confirmed King Charles would not be attending the conference.

The monarch has a long-standing interest in environmental issues, but the Palace said it had sought advice from then-PM Ms Truss and that "with mutual friendship and respect there was agreement that the King would not attend".

However, US climate envoy John Kerry told the BBC's Newshour programme it would be "good for the world" and the UK if the King attended.

"He has 60 years of credibility and leadership in this venue," he said. "It's not a political issue or an ideological issue, it is an issue based on science."