Cody Bellinger is a free agent at 27, an ideal age for a player to hit the open market. But his agent, Scott Boras, sounds as if he wants Bellinger to sign only a one-year deal.

“I’ve already been offered multi-years,” Boras said Sunday, two days after the Dodgers declined to tender Bellinger a contract for 2023. “Most likely, because of his age, we don’t want a multi-year.”

Bellinger’s combined .611 OPS the past two seasons was the lowest in the majors (minimum 3.1 plate appearances per team game played). But Boras is sticking to what he said at the general managers’ meetings in Las Vegas, that Bellinger’s issue was a lack of strength in his right shoulder, not a lack of skill.

Bellinger dislocated the shoulder several times in 2020, then re-injured it celebrating his home run in Game 7 of the NLCS while bashing forearms with teammate Enrique Hernández. He underwent surgery that November, and hasn’t been the same hitter since.

The Dodgers non-tendered Bellinger because they did not want to pay him a salary in the $18 million to $20 million range in his final year of arbitration. President of baseball operations Andrew Friedman said the team explored trading Bellinger before the tender deadline, with no success. Still, this is a player who was the 2017 National League Rookie of the Year and 2019 NL MVP.

Through his offensive troubles, Bellinger remained an excellent defensive center fielder and baserunner. If he signs a one-year deal and continues rebounding at the plate — he improved from 10 homers and a .302 slugging percentage in 2021 to 19 homers and a .389 slug in 2022 — he could be a much more attractive free agent next offseason.

Center field is a position of scarcity in the majors. And Bellinger is uniquely positioned to take advantage of the shortage in the market.

Nimmo poised to cash in

The biggest free-agent contract signed by a center fielder was Jacoby Ellsbury’s seven-year, $153 million deal with the Yankees prior to the 2014 season. Mike Trout and Julio Rodríguez eventually landed bigger guarantees, but through extensions, not the open market.

Brandon Nimmo, the top center fielder in this year’s free-agent class, shares certain similarities with Ellsbury. Both were first-round picks. Both hit the open market represented by Boras entering their Age 30 seasons. Both were not always durable in the early years of their careers. 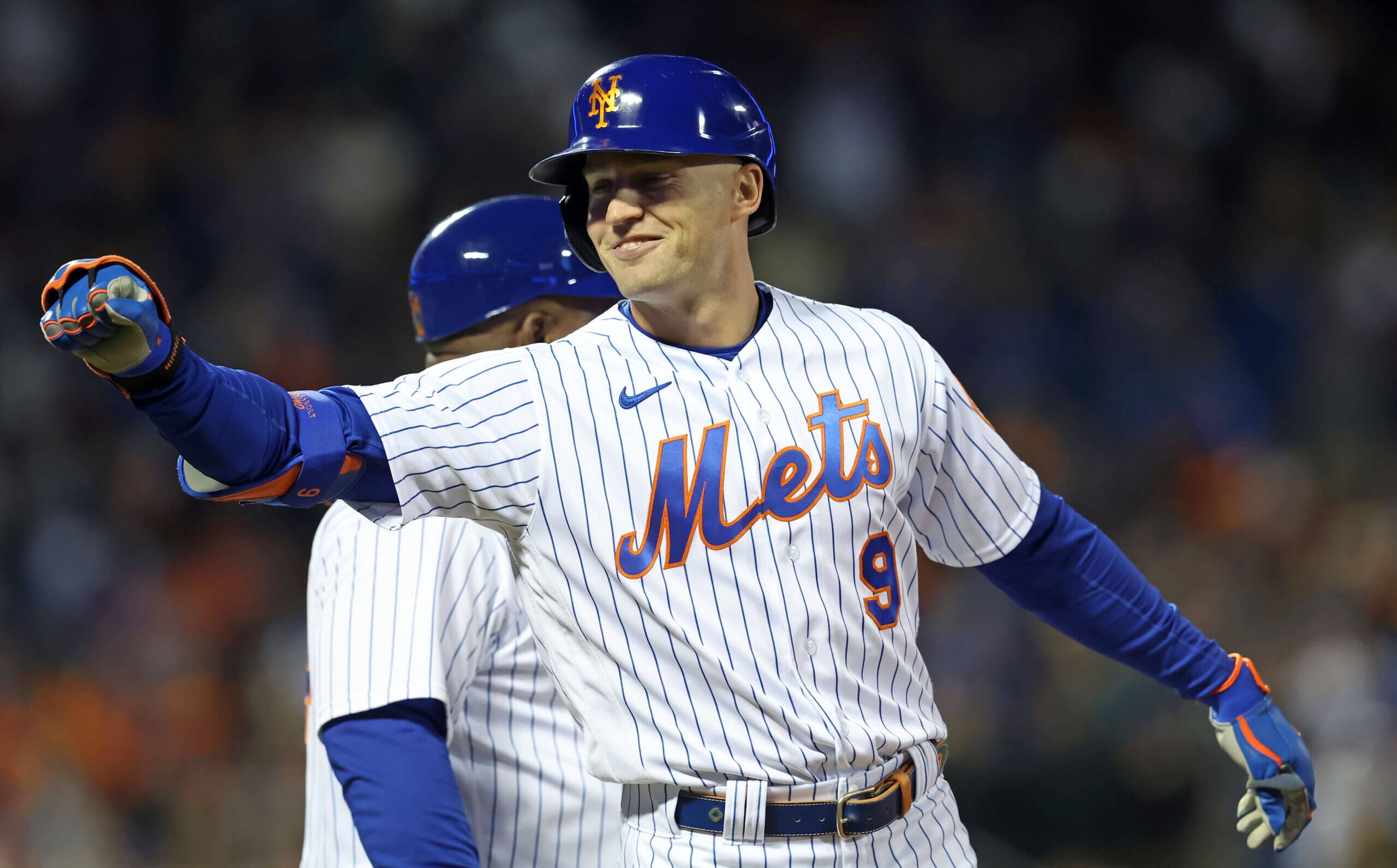 Ellsbury, of course, proved a huge disappointment with the Yankees, playing only four seasons before injuries ended his career at 33. Nimmo has dealt with various physical issues over the years, but played in a career-high 151 games last season and, if anything, might be an upward trajectory.

Some in the industry believe Nimmo, who grew up in Wyoming and played less baseball than youngsters in warmer climates, is still improving. His career 130 OPS+ entering free agency is considerably higher than Ellsbury’s was prior to hitting the market. And while Ellsbury was a far more accomplished base stealer, Nimmo’s on-base percentage is 35 points higher than Ellsbury’s was (.385 to .350), and his slugging percentage is slightly higher as well (.441-.439). Since entering the league in 2016, Nimmo’s .379 OBP out of the leadoff spot is the highest in the majors.

Nimmo’s durability? It’s a question, for sure. Prior to last season, he played more than 92 games in a season only once, in 2018, when he appeared in 140. But given his performance when healthy, and the shortage of center fielders in the market, he still should fare quite well in free agency. The Athletic’s Jim Bowden predicted five years, $100 million.

Anthony Rizzo was wise to reject the Yankees’ $19.65 million qualifying offer, negotiating a higher average annual value in his two-year, $40 million free-agent contract with the club. The next question is whether Rizzo, 33, will accomplish his goal of beating the five-year, $70 million extension the Cubs offered him in the spring of 2021.

The Yankees will face an $11 million decision on Rizzo at the end of his new deal, either exercising his $17 million option or buying him out for $6 million. If the Yankees pick up the option, Rizzo will earn $67 million over four years before again hitting the open market. If not, he will make $56 million over three.

As The Athletic reported in March 2021, the Cubs’ proposal to Rizzo was an initial offer subject to negotiation, and it was front-loaded with escalators that would have enabled him to earn more on the back end.

Four months after Rizzo rejected the offer, the Cubs sent him to the Yankees at the trade deadline. The Yankees re-signed him that offseason to a two-year, $32 million free-agent deal with an opt-out. Rizzo opted out after hitting 32 home runs, his most since 2017, and producing an OPS+ 31 percent above league average, matching his second-highest figure since 2016.

“It’s not like I’m sitting here saying I wish I had taken (the Cubs’ offer),” Rizzo told me last spring. “If I play four to six more years, I’m going to make more money than I would doing that. When it’s all said and done, we’ll see. But as of now, no regrets.”

Rizzo likely will exceed the Cubs’ initial proposal as long as he keeps producing. But he will be 35 or 36 the next time he is a free agent, ages at which salaries generally decline. Assuming the Cubs indeed were willing to go higher than $70 million, their assessment of his value might have been more accurate than it seemed at the time.

While Rizzo beat the qualifying-offer salary in his multi-year deal, left-hander Tyler Anderson took a much different path after rejecting the Dodgers’ QO, settling for an average annual value well below $19.65 million in his three-year, $39 million free-agent contract with the Angels.

Anderson had a 2.57 ERA in 178 2/3 innings during his breakout with the Dodgers last season. Prior to that, his career ERA was 4.62. The penalties for signing a player who rejects a qualifying offer — draft picks and international bonus pool space — would have been more of a drag on Anderson’s market than it will be on say, Jacob deGrom’s.

Another consideration for Anderson was his age; he turns 33 on Dec. 30, and this might have been his best shot to secure a big guarantee. While he possibly could have exceeded $39 million if he had remained on the open market, his new deal more than doubled his previous career earnings of $15.995 million.

Nimmo is the leading free agent in center field, but not the only option for rival clubs in need at that position. The Diamondbacks, whose roster includes four left-handed hitting center fielders, are open to a trade.

Corbin Carroll, who had an .830 OPS last season in his first 115 major-league plate appearances, is off-limits, according to sources familiar the team’s thinking. But three others with the ability to play center — Daulton Varsho, Alek Thomas and Jake McCarthy — are in play.

Of those, Varsho is perhaps the least likely to move. The Diamondbacks, hellbent on improvement after three straight losing seasons, would find it difficult to replace the 27 homers he hit in 2022. Varsho also is projected to earn $2.8 million in the first of his four years of salary arbitration, making him less attractive to low-revenue clubs.

McCarthy and Thomas were back-to-back picks by the Diamondbacks in 2018, McCarthy going 39th overall out of the University of Virginia, Thomas 63rd overall out of Mount Carmel High in Chicago. Thomas emerged as a superior prospect, but McCarthy — perhaps the best hitter of the group, and the best against left-handed pitching — outperformed him last season in their major-league debuts.

To trade one of their center fielders, the Diamondbacks will require significant major-league help, be it pitchers, right-handed power hitters and/or others. Club officials could always keep the group together if they don’t get an offer they deem worthy. Thomas’ value, in particular, should only rise if he figures it out offensively. And the Diamondbacks expect him to do just that.

Need a reliever? Call the Tigers

The Tigers, too, are a popular target in trade discussions, especially with the eruption in the free-agent market for relievers — five years, $102 million for Edwin Díaz; five years, $46 million for Robert Suárez; three years, $34.5 million for Rafael Montero.

Those deals caused sticker shock for a number of clubs, prompting them to explore trades instead. The Tigers held Joe Jiménez, Gregory Soto and other relievers at the deadline, then finished the season eighth in the majors in bullpen ERA. Keeping their ‘pen intact might help the team better compete in 2023. But even with lefty Andrew Chafin opting out, it would not be a surprise if new president of baseball operations Scott Harris took a more creative, aggressive approach than his predecessor, Al Avila.

Who might go? Jiménez, projected by MLB Trade Rumors to earn $2.6 million in his walk year, had a 33.3 percent strikeout rate last season, 17th best among relievers. Alex Lange, who is still two years away from arbitration, had a 30.3 percent strikeout rate. Soto is the wild card. Projected to earn $3.1 million, he comes with two additional years of control, but also performance risk stemming in part from his high walk rate.

Why the Guardians traded Nolan Jones

MLB Pipeline ranked third baseman/outfielder Nolan Jones first among Cleveland’s prospects in 2020 and third in 2021, so how is it that the Guardians traded him last week for infielder Juan Brito, who has yet to play above Class A?

Part of it is that third baseman José Ramírez is entering the second year of a seven-year contract. Another part is that the Guardians are deep in left-handed hitters in the outfield and first base. They also are deep in young middle infielders, but are nonetheless intrigued by Brito’s athleticism and strike-zone management.

The Rockies liked Jones coming out of the 2016 draft, when he went to Cleveland in the second round, 55th overall. Jones, 24, can play on the corners and help balance the Rockies’ predominantly right-handed lineup. He also has a minor-league option remaining.

Presumably, the Rockies are looking for more proven left-handed hitters, as well. Nimmo, from the neighboring state of Wyoming, would be an obvious target. But the Rockies likely would be inclined to pursue more affordable options. Bellinger might be one.

• The Astros, after losing out on Rizzo, have continuing interest in José Abreu, who also is a “top priority” for the Padres, according to MLB Network’s Jon Morosi.

Abreu, who turns 36 on Jan. 29, had career-lows with 15 homers and a .446 slugging percentage last season. But he remains an effective offensive player, as evidenced by his .378 on-base percentage, the second-highest of his career, and 133 OPS+, his best over a full season since 2017.

• The Rangers were among the teams that recently hosted Japanese right-hander Kodai Senga for a visit. But Senga, a five-time Japan Series champion and 2020 Olympic gold medalist, wants to join a team with an immediate chance to win, and the Rangers might not qualify. The Mets and Padres are among the other clubs Senga visited, and several more are in the mix.

Pitching is not the Rangers’ only focus. The team also is showing interest in free-agent outfielder Mitch Haniger, who is drawing attention from the Giants and other clubs as well. Haniger, who missed more than three months last season with a sprained right ankle, batted .254 with eight homers and a .740 OPS after rejoining the Mariners on Aug. 6.

• Friday’s trade between the Mets and Marlins wasn’t exactly a blockbuster, but one rival executive viewed the Mets’ acquisitions of right-handers Elieser Hernandez and Jeff Brigham as something of a financial flex.

Hernandez and Brigham, acquired for pitching prospect Franklin Sánchez and a player to be named or cash, are both arbitration-eligible, with Hernandez projected to earn $1.8 million and Brigham $800,000. Both also have minor-league options remaining, giving the Mets the ability to maneuver them back and forth between the majors and minors. Hernandez could serve as a swingman, similar to what free agent Trevor Williams was last season.