As the Russia-Ukraine war enters its 211th day, we take a look at the main developments. 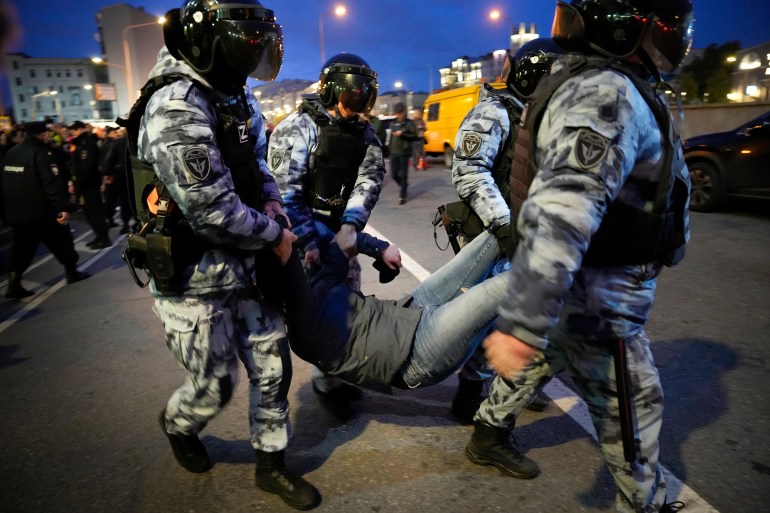 Russian riot police detain a demonstrator during a protest against troop mobilisation in Moscow on Wednesday [File: Alexander Zemlianichenko/AP]

Here is the situation as it stands on Thursday, September 22.

Ukraine’s President Volodymyr Zelenskyy also urged the United Nations to punish Moscow for its invasion, calling for a special tribunal and for Russia to be stripped of its UN Security Council veto. Russia and Ukraine carried out a surprise prisoner swap involving nearly 300 people, including prisoners from the United States, the United Kingdom, and Morocco, the largest since Moscow’s invasion began nearly seven months ago. A police monitoring group said more than 1,300 people were arrested at demonstrations across Russia against President Vladimir Putin’s announcement of a partial conscription of civilians to fight in Ukraine.

Hugely welcome news that five British nationals held by Russian-backed proxies in eastern Ukraine are being safely returned, ending months of uncertainty and suffering for them and their families.

Some nations such as Latvia and Finland suggested they will not provide asylum or refuge to people fleeing Russia after Putin announced the partial drafting of reservists. One-way flights out of Russia rocketed in price and were selling out fast after Putin ordered the immediate call-up of 300,000 reservists to fight in Ukraine. China called for a “ceasefire through dialogue” after Putin announced the military mobilisation. North Korea said it has never supplied weapons to Russia and has no plans to do so, condemning US claims of arms transfers for the Ukraine war as an attempt at “tarnishing” its image. Russian-backed separatists in occupied regions in Ukraine announced referendums for September 23-27 in Luhansk, Donetsk, Kherson and Zaporizhia provinces, representing about 15 percent of Ukrainian territory. A US astronaut and two Russian cosmonauts are set to blast off to the International Space Station on a Russian-operated flight despite soaring tensions between Moscow and Washington over the invasion of Ukraine.

Ukraine’s President Volodymyr Zelenskyy said he did not believe the world would allow Putin to use nuclear weapons after the Russian president said Moscow would use all means to protect its territory. Putin’s thinly veiled threat to use nuclear arms was “dangerous and reckless rhetoric”, NATO’s Secretary-General Jens Stoltenberg said. US President Joe Biden said Moscow was making “irresponsible” threats after the comments. The head of the UN atomic agency, Rafael Grossi, said he would not abandon a plan to create a protection zone around the Zaporizhzhia nuclear power plant despite Russian drafting plans and moves to hold a referendum in the region.