As the Russia-Ukraine war enters its 213th day, we take a look at the main developments. 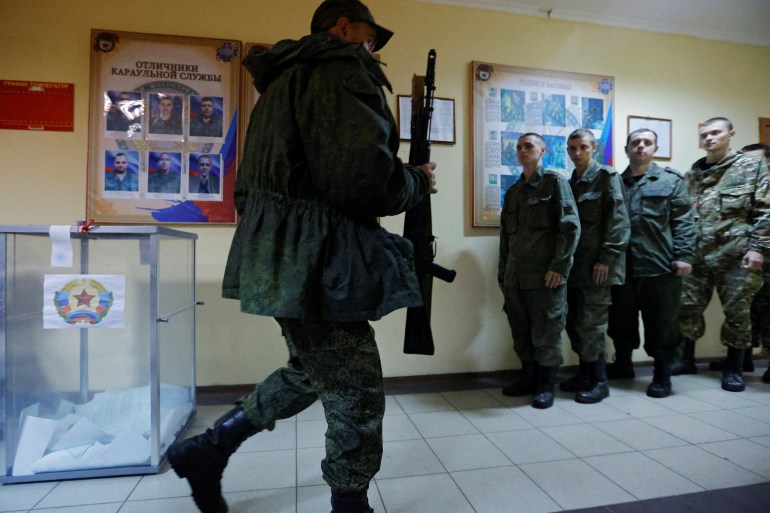 Here is the situation as it stands on Saturday, September 24.

Russia has launched referendums aimed at annexing four occupied regions of Ukraine, drawing condemnation from Kyiv and Western nations who dismissed the votes as “a sham” and pledged not to recognise the results. Ukrainian officials said people were banned from leaving some occupied areas until the four-day vote was over, armed groups were going to homes to force people to cast ballots, and employees were threatened with the sack if they did not participate. The votes in the provinces of Luhansk, Donetsk, Kherson and Zaporizhia were hastily organised after Ukraine recaptured large swaths of the northeast in a counteroffensive. Ukraine, Western leaders and the United Nations condemned the votes as an illegitimate precursor to illegal annexation. There are no independent observers, and much of the pre-war population has fled. Russia maintains the referendums offer an opportunity for people in the region to express their views. The United States is prepared to impose additional economic costs on Russia in conjunction with US allies if Moscow moves forward with annexing portions of Ukrainian territory, the White House said. NATO will ramp up its help for Kyiv in response to the “sham” referendums, the alliance’s secretary-general said. British music stars Harry Styles and Ed Sheeran, US basketball legend Shaquille O’Neal, and other celebrities will donate personal objects for a campaign launched to support healthcare in Ukraine.

A UN-mandated investigation commission said it found evidence of war crimes including executions, rape, torture and confinement of children in Russian-occupied areas of Ukraine after visits to 27 areas and interviews with more than 150 victims and witnesses. Russia denies deliberately attacking civilians in the conflict and says abuse accusations are a smear campaign. It did not immediately comment on the report.

Ukraine said it would downgrade diplomatic ties with Iran over its decision to supply Russian forces with drones. Russia struck the Pechenihy dam on the Siverskyi Donets river in northeast Ukraine this week using short-range ballistic missiles or similar weapons, the British military said. Russian commanders may be attempting to strike sluice gates of the dams in order to flood Ukrainian military crossing points, the UK defence ministry said. A Russian missile hit a residential building in Zaporizhzhia causing casualties, the city’s acting mayor said. Ukraine said two drones killed a woman and destroyed a building in Odesa port. An Iranian-made Shahed-136 drone, designed to slam into its targets, was destroyed over the Black Sea by air defences. The White House said the United States sees no reason to adjust its nuclear posture after Russia’s President Vladimir Putin warned the West he was not bluffing when he said he would be ready to use nuclear weapons to defend Russia. Some draft-age Russians headed abroad to escape their country’s biggest conscription drive since World War II.
Read Entire Article