As the Russia-Ukraine war enters its 218th day, we take a look at the main developments. 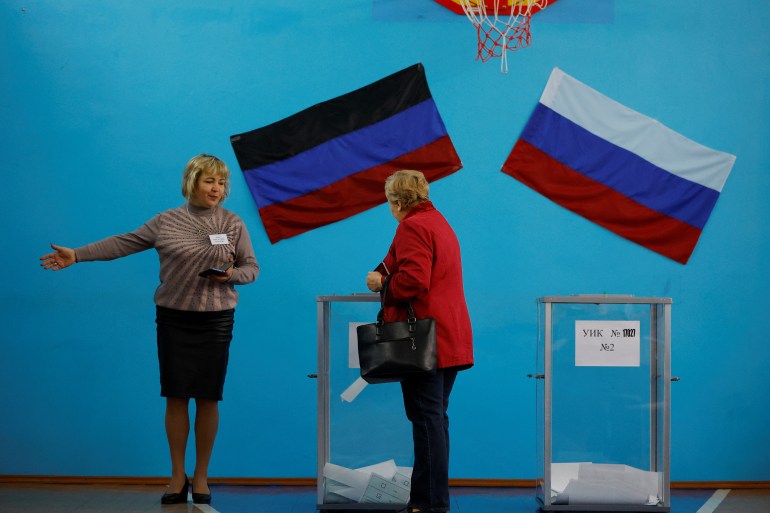 A member of an electoral commission shows the way to a polling station during a referendum on the joining of the self-proclaimed Donetsk People's Republic to Russia [File: Alexander Ermochenko/Reuters]

Here is the situation as it stands on Thursday, September 29.

Russia is poised to formally annex parts of Ukraine after “referendums” in four occupied regions that make up about 15 percent of Ukraine’s territory to join Russia. The Ukrainian government has condemned the votes. Russian President Vladimir Putin may announce the annexation as early as Friday. On Moscow’s Red Square, a stage with giant video screens has been set up with billboards proclaiming “Donetsk, Luhansk, Zaporizhzhia, Kherson – Russia!” The head of the upper house of the Russian parliament said it could consider the incorporation of the four regions on Tuesday, three days before Russian President Putin’s 70th birthday. The European Union slammed the “illegal” annexation votes and their “falsified” results, saying it is “another violation of Ukraine’s sovereignty and territorial integrity”. The United States said it will not recognise Russian-annexed areas across Ukraine as the White House said: “every aspect of this referendum process was pre-staged and orchestrated by the Kremlin” and would be challenged internationally. Residents who escaped to Ukrainian-held areas in recent days have told of people being forced to mark ballots in the street by roving officials at gunpoint. But Moscow’s foreign ministry said Russian-occupied regions in Ukraine made a “conscious and free choice” to join Russia.

Moscow’s traditional allies in Central Asia are embracing Russians fleeing conscription and helping tens of thousands of Russian men to enter the country. Since September 21, almost 100,000 Russians have entered Kazakhstan. Russia has set up draft offices at border crossings, Russian news agencies said, as long lines of Russians trying to escape being called up to fight in Ukraine continue to clog highways out of the country. The US has reiterated its call for its citizens to “immediately” leave Russia after Moscow announced the partial mobilisation.

Kremlin spokesman Dmitry Peskov said Russia would need to keep fighting until it took control of all of the eastern Donetsk region. About 40 percent is still under Ukrainian control and the scene of some of the war’s heaviest fighting. Ukraine’s armed forces conducted attacks on Russian forces in four areas near the city of Kherson as part of their counteroffensive, while aircraft hit six targets. The United States is preparing a new $1.1bn weapons package for Ukraine that will be announced soon.

Sweden’s coast guard discovered a fourth gas leak on the damaged Nord Stream pipelines this week, a spokesperson told the Svenska Dagbladet newspaper. The European Union promised a “robust” response to any intentional disruption of its energy infrastructure after saying it suspected sabotage was behind gas leaks. Leaking gas bubbled up in the Baltic Sea for the fourth day after suspected explosions tore through undersea pipelines built by Russia and European partners. The Nord Stream 1 pipeline, once the main route for Russian gas to Germany, was already shut but cannot now be easily reopened. Russia is requesting a UN Security Council meeting after European officials said the leaks on key gas pipelines running from Russia to Europe were the result of “sabotage“. Denmark said more than half of the gas in the Nord Stream pipelines in the Baltic Sea had leaked into the atmosphere. Russia questioned whether the US caused undersea gas pipeline leaks in Europe that have been blamed on sabotage, in a turn of the tables that American officials bluntly called “ridiculous”.