As the Russia-Ukraine war enters its 89th day, we take a look at the main developments. 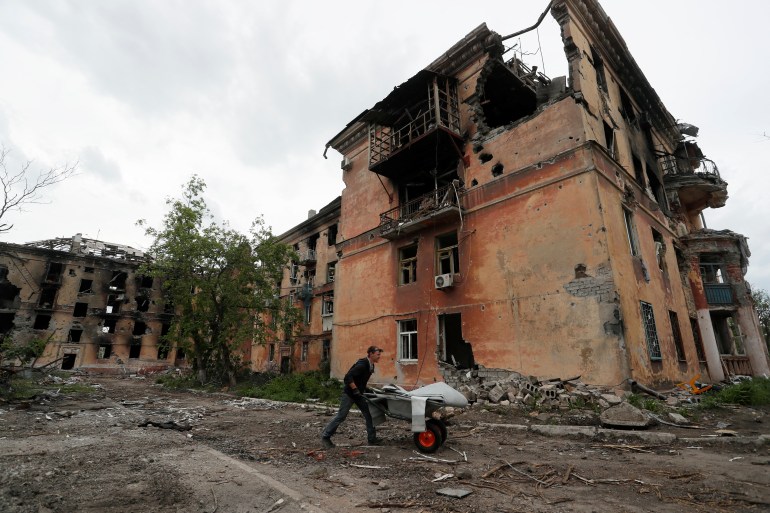 Ukraine rejected a ceasefire or any territorial concessions to Moscow as Russia increased attacks in eastern and southern areas of Ukraine [File: Alexander Ermochenko/Reuters]

Here are the key events so far on Monday, May 23.

Russia is trying to destroy Severodonetsk as its forces bombard the city from all sides, the governor of Luhansk said. Russia said its forces control 95 percent of Luhansk, part of the eastern Donbas region. Russia suffered a similar death toll in three months of the war in Ukraine as the Soviet Union in nine years of war in Afghanistan, claimed the UK’s defence ministry. Ukraine said Russia is strengthening its position in the Black Sea as it added the frigate Makarov, increasing the risk of missile attacks on Ukraine. Kharkiv’s emergency services recovered 150 bodies across the region since Russia’s invasion began on February 24, Interfax reported. A Ukrainian court will reach a verdict on Monday for a 21-year-old Russian soldier – the first to go on trial for alleged war crimes after shooting dead an unarmed civilian. If he is convicted, he could get life in prison. Ukraine’s parliament banned the symbols “Z” and “V” – used by Russia’s military to promote its war – but agreed on their use for educational or historic purposes.

Ukraine rejected a ceasefire or any territorial concessions to Moscow as Russia increased its attack in the eastern and southern parts of the country. Russia is willing to resume peace talks with Ukraine but the decision remained with Kyiv, Russia’s lead negotiator said. Polish President Andrzej Duda became the first foreign leader to address the Ukrainian parliament since the start of Russia’s war. Ukraine and Poland agreed to establish joint border customs control and work on a shared railway company to ease the movement of people and increase Ukraine’s export potential after the leaders met in Kyiv. UK Prime Minister Boris Johnson discussed with Ukraine’s President Volodymyr Zelenskyy Russia’s blockade of the port of Odesa to ensure exports to the rest of the world, and humanitarian aid to Ukrainians, a Downing Street spokesperson said. New Zealand is sending 30 defence force personnel to the UK to help train Ukrainian soldiers. Zelenskyy gave the Polish city of Rzeszów the honorary title of “Rescuer City” for its help in welcoming millions of Ukraine’s refugees.

Russia’s imports have fallen to 2020 levels because of sanctions and “economic war” against Russia, resulting in logistical difficulties, a deputy head of Russia’s customs service said. Ukraine ended a double taxation agreement with Russia that has been in place since 1995, in which Russians residing in Ukraine were exempt from paying local taxes but paid Russian tax.