Russian Grand Prix: Charles Leclerc to start from back of grid because of new engine 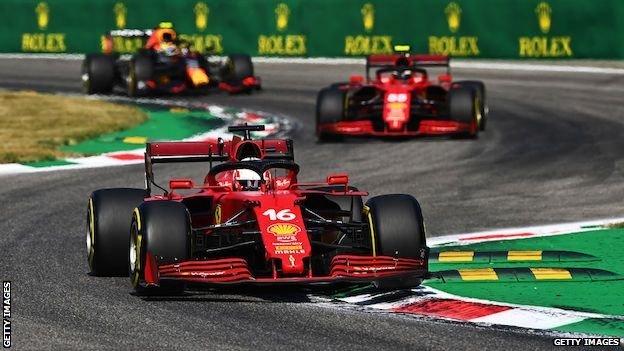 Charles Leclerc is sixth in the F1 standings

Ferrari's Charles Leclerc will start this weekend's Russian Grand Prix from the back of the grid as a result of using a new, upgraded engine.

Leclerc has already used his permitted number of engines this season so a new one means an automatic grid penalty.

His Ferrari team-mate Carlos Sainz will continue with the old-specification hybrid system.

The Spaniard will receive the upgraded engine at an unspecified point later in the season that Ferrari say will "follow an evaluation of the right compromise between competitiveness and the impact of the penalty".

Leclerc's car is being fitted with a new engine for this weekend's race in Sochi because one of his battery packs was damaged in the multi-car pile-up at the start of the Hungarian Grand Prix last month.

Ferrari say using the new engine, which includes a new battery, is a "precautionary measure relating to the potential risk of using the battery pack damaged in Hungary".

Leclerc has been using it in the three races since the accident but his car was running short of battery-related parts as a consequence of the accident.

As the new engine was ready to be introduced this weekend, it therefore made sense, the team say, to give it to Leclerc.

The team say the "main purpose" of running the new hybrid system in the final part of this season this year "is to gain experience for the 2022 car project".

Its performance upgrade is said to be less than 10bhp.