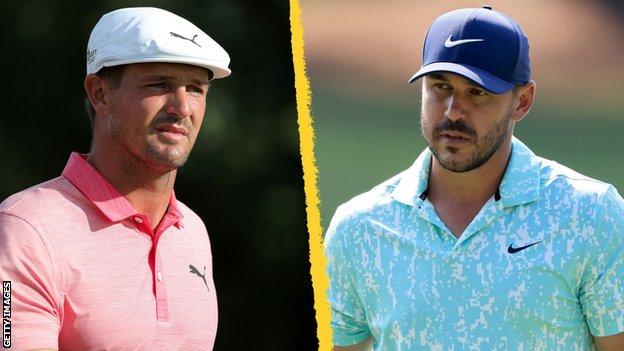 The Bryson DeChambeau-Brooks Koepka rivalry could inspire the US at the Ryder Cup rather than hinder them, says Europe captain Padraig Harrington.

The pair have been in an ongoing feud that is said to have started in 2019.

US captain Steve Stricker has tried to end the dispute, but Harrington says it could actually help the team.

"If they get their act together and pull together, the team sees that and pulls together really strongly," he told the Guardian.

"When you have friction between players, you bring them into a team environment and you overcome it, that's actually a big bonus to the team.

"All of a sudden you get an uplift from it. That's why I'm not relying on it. As a captain, I'd see it as something that could work in my favour. If I can get these guys to show unity, the rest of the team would follow."

Harrington cited his sometimes frosty relationship with Sergio Garcia as an example, which goes back to his 2007 Open and 2008 US PGA wins over the Spaniard, who the Irishman later described as a "sore loser".

Harrington says they were always able to put their personal relationship to one side for the Ryder Cup, adding that their differences are now firmly behind them.

The 2017 Masters champion has been chosen as one of his three wildcard picks for the Ryder Cup later this month.

"You could say myself and Sergio had that little bit of friction over the years, which we easily overcame on weeks of the Ryder Cup," he added. "We would be hugging at a Ryder Cup."

The 43rd staging of the biennial event takes place at Whistling Straits in Wisconsin from 24-26 September.

Europe have won nine of the past 12 Ryder Cups and are the defending champions after winning 17½-10½ at Golf National in Paris in 2018.