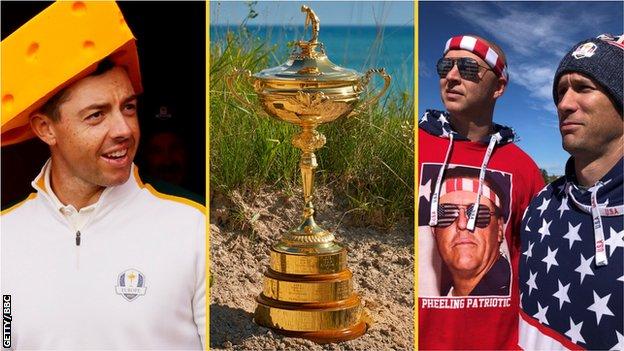 Rory McIlroy wore a foam cheesehead - which are donned by Wisconsinites at sporting events - before Wednesday's practice, while lots of patriotic home fans are decked out in American stars and stripes

Three years after Europe regained the Ryder Cup in Paris, the United States finally have their opportunity to avenge that thrashing in front of a partisan home crowd in Wisconsin.

The 43rd edition of the usually-biennial event starts on Friday, after being delayed by one year by the coronavirus pandemic.

The line-ups for Friday's opening foursomes (alternate shot) matches will be revealed at 22:45 BST during Thursday's opening ceremony.

Captained by Irishman Padraig Harrington, the visitors are hoping experience will be the key to securing another win against an American side which features six players making their Ryder Cup debut.

However, the hosts - led by Steve Stricker, who played in three Ryder Cups and has also been a vice-captain - have greater pedigree in terms of world ranking and major victories. 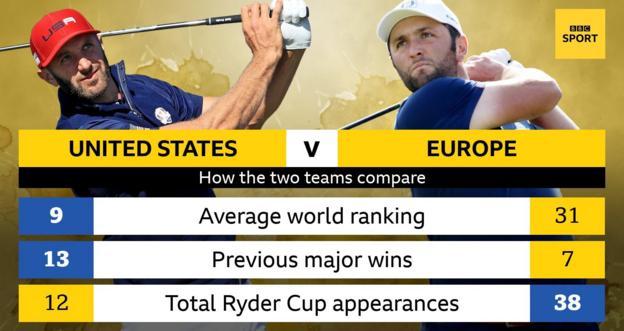 Europe's Jon Rahm (right) is the world number one, with American Dustin Johnson (left) ranked one place below

Home advantage has also proved to be key recently, with only two away victories - for Europe in 2004 and 2012 - in the past 11 events.

"I think winning any Ryder Cup is huge and it's a monumental achievement for all that are involved," said Europe's Rory McIlroy.

"But winning a Ryder Cup on the road has become more meaningful.

"We're coming in here as underdogs with a lot of things stacked against us, so I think that would make it even more of an achievement."

With up to 40,000 home fans expected daily at Whistling Straits, and virtually zero European support because of tough US travel rules, there is set to be a partisan atmosphere in Wisconsin.

American patriotism was already clear around the course during this week's practice rounds - illustrated by fans wearing colourful clothing with stars and stripes, along with supportive chants of 'U-S-A, U-S-A' - and is only likely to amplify when the action starts for real on Friday.

"It's not just Wisconsin but the whole country is showing up," said Stricker, who hails from the upper midwestern state.

"It's been a long time waiting and everybody is excited to get this thing going."

Stricker urges US fans to 'respect' European players'The Americans haven't cornered ambition' - how Europe's team culture has brought successIain Carter column: 'The wait for the Ryder Cup is over - bring it on'

Johnson and Morikawa are also among six major winners in the American ranks, along with Jordan Spieth, Brooks Koepka, Bryson DeChambeau and Justin Thomas.

But there has long been a narrative of the star-studded Americans struggling to gel and form a bond like their European rivals, leading to defeats which did not look like happening on paper.

Stricker, who has been involved in each of the past six Ryder Cups as a player or vice-captain, believes it is a "misconception".

He also insisted the long-running rivalry between DeChambeau and Koepka is "not going to be an issue".

Some have questioned if their rows and spiky exchanges might undermine team spirit, although both men played down the subject and said they have enjoyed "great conversation" over dinner this week. 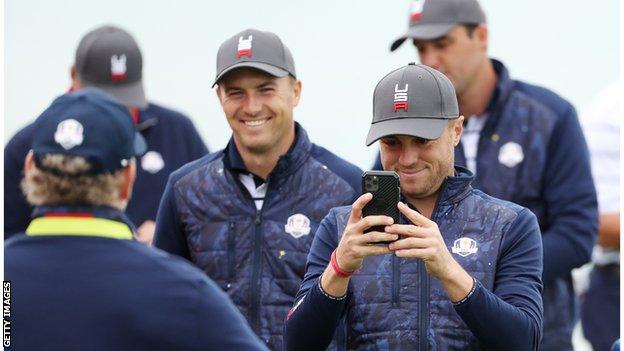 Justin Thomas says the United States team are enjoying "the brotherhood, the camaraderie" of a special week

Europe include seven of the players that triumphed in Paris, including Spanish world number one Jon Rahm, Northern Ireland's Rory McIlroy and England's Tommy Fleetwood.

Another Englishman, Lee Westwood, returns for a European record-equalling 11th appearance, while fellow veterans Sergio Garcia and Ian Poulter were chosen by Harrington as two of his three wildcards.

Spain's Garcia has played in nine Ryder Cups and is Europe's all-time leading points scorer with 25½, while England's Poulter, known as 'the Postman' given his knack for delivering crucial points, has played some of the best golf of his career in the event and makes a "magical" seventh appearance.

Lowry is one of three debutants in the team, along with Austria's Bernd Wiesberger and Norway's Viktor Hovland who are both the first players to represent their nations in the event.

"Europe has a strong team when it comes to experience. That's quite relevant when you're playing an away match," said Harrington, who promised to get his first tattoo to mark the occasion if Europe win, copying his predecessor Thomas Bjorn who did so after the win in Paris.

"If you had two players, one experienced and one not of equal ability, certainly in an away match, you would be looking for experience. I'm very comfortable that my team is that experienced." 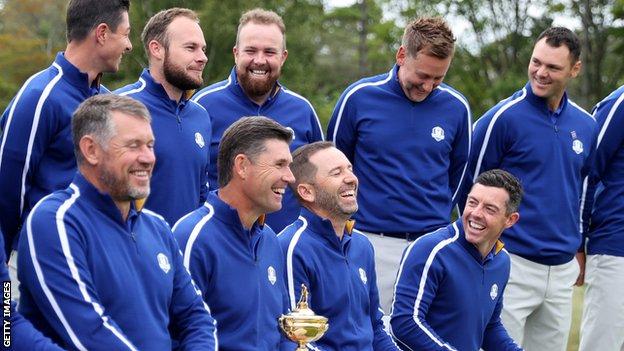 The European team spirit is not something the players have "to work on", says Lee Westwood. The Englishman adds: "It's just there."

Once pancake-flat farmland and then a desolate hinterland after the US Army stopped using it as an anti-aircraft training facility, this part of the Lake Michigan coastline in Wisconsin has been transformed by the creation of Whistling Straits.

Built by local billionaire Herb Kohler - who made his money through the family's plumbing business - and designed by the late Pete Dye, the 560-acre plot was remodelled to meet Kohler's brief of ensuring it "looks like it's in Ireland".

Two miles of Lake Michigan's coastline is hugged by eight holes, with all 18 having elevated views of the water - which has a surface area almost as big as Ireland. 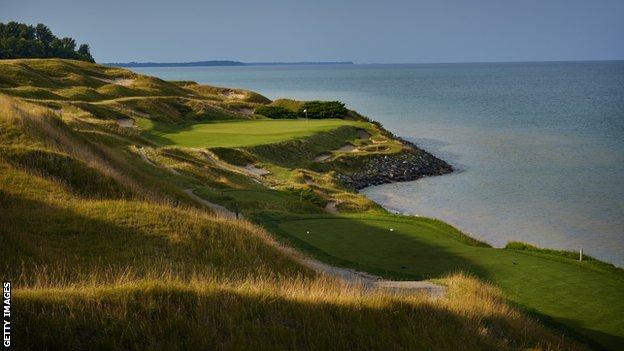 The lake provides a wicked wind as waves crash onto the rocky straits - hence the name of the course - with the pace picked up on the holes which cling onto the coastline.

There are more than 1,000 bunkers on the course, although the majority are cosmetic and help create a visually-daunting aesthetic for which Dye was renowned.

"The difficulty level of the course is how windy it is that particular day and how easy, or difficult, captain Stricker wants to set it up," Mike O'Reilly, the director of operations at Whistling Straits, told Today's Golfer magazine.

What happens if a player tests positive for Covid-19?

Any player who tests positive for Covid is "immediately ineligible" for the remainder of the event, according to the Ryder Cup protocols.

If more than one player tests positive, the whole event could be in jeopardy.

"While not speculating on precise numbers, the exact details of the scenario would be assessed in order to determine its impact on the overall playing of the Ryder Cup," said the organisers.

European captain Harrington and his US counterpart Stricker have agreed to each team having a "Covid envelope" in case any of their players test positive for the coronavirus.

Harrington and Stricker will put the names of three of their players into an envelope before Sunday's 12 singles matches.

If one team has a player forced out, the other team would then sideline the top player from the Covid envelope list to re-balance the matches and the point would be halved.

There is a similar envelope in place for if a player gets injured and cannot play in the singles.

The Ryder Cup is a matchplay event where the players go head-to-head against their opponents, which is different to most weeks for the players, who contest strokeplay events on their respective PGA and European Tours.

It is played over three days with four foursomes (alternate shot) and four fourballs matches played on both Friday and Saturday, followed by the 12 singles matches on Sunday.

With one point available for each match, there are 28 points to be played for over the week. As defending champions, Europe need 14 points to retain the Ryder Cup. The US need 14½ to regain the trophy.

The order of play during the first two days of competition was determined by the home team captain Steve Stricker.

Saturday: Four foursomes starting at 13:05, with four fourball matches from 18:10.

Before the action starts, the event will formally begin with an opening ceremony on Thursday.

Featuring live music, anthems and team introductions, it starts at 22:00 BST (16:00 local time) and will be covered by a live text commentary on the BBC Sport website. 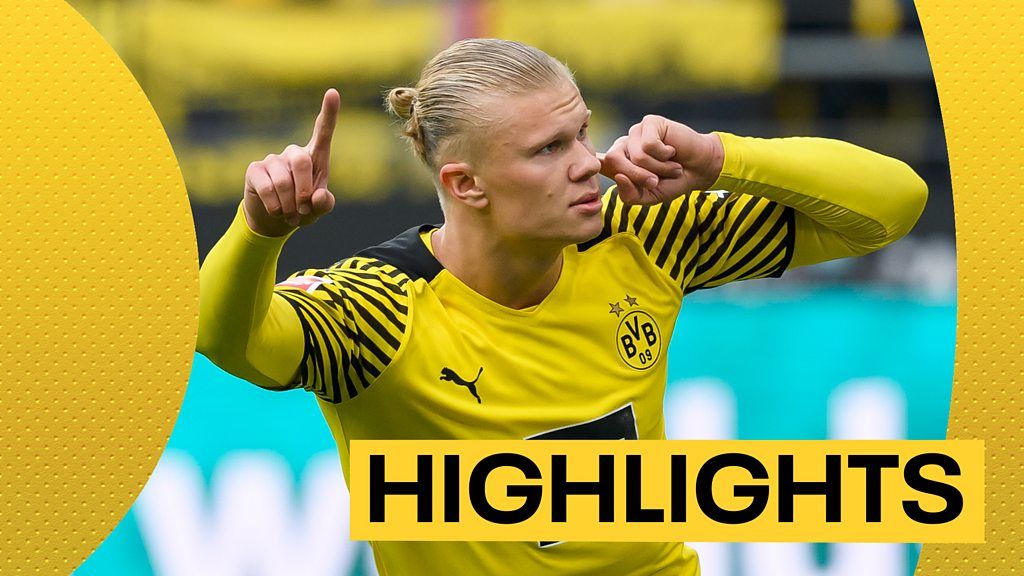 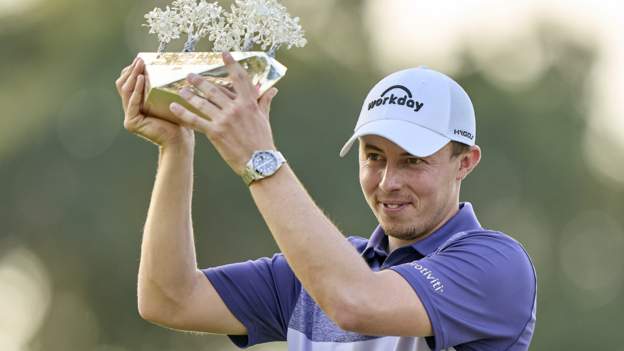 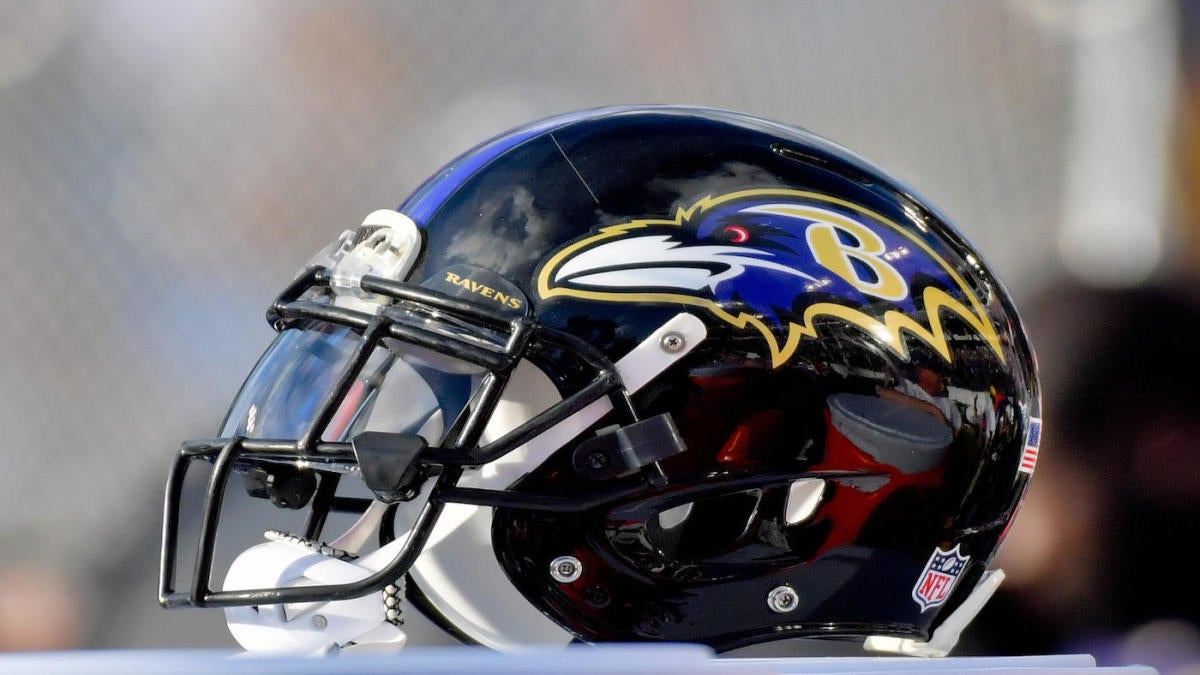