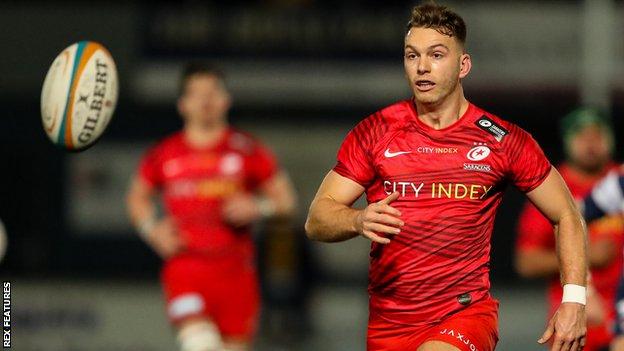 Saracens will "have a target on their backs" as they bid to win promotion from the Championship at the first attempt, according to boss Mark McCall.

The former Premiership and European champions start life in the second tier at Cornish Pirates on Saturday.

"We know we're there to be shot at, perhaps doubly so, and we need to be ready," director of rugby McCall said.

After delays to the Championship's start while clubs waited for loan assurances from the government's Winter Sports Survival Package, the five-times Premiership champions must negotiate a shortened league format.

Saracens will play the other 10 competing sides once in a bid to qualify for a two-leg promotion play-off between the top two.

"It's going to be a bit of a race to the finish line," McCall said. "There won't be a lot of margin for error.

"Originally, we were planning to spend as much time as possible travelling down before and after away games, socialising as much as we can with opponents. But current restrictions mean we sadly won't be able to." 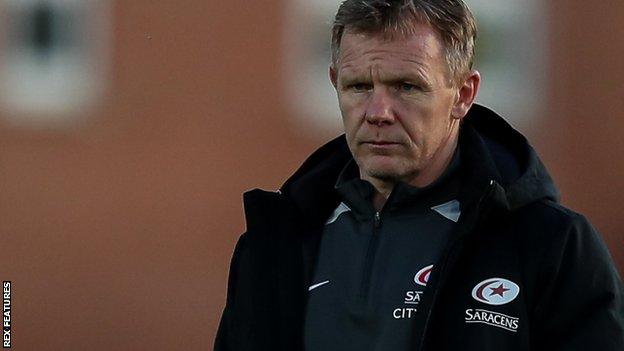 McCall's squad may be without several internationals while others including Ben Earl, Max Malins, Alex Goode and Nick Isiekwe are on loan at other clubs, but he will still be able to call upon vast experience later in the campaign.

England's Owen Farrell, Mako and Billy Vunipola, Jamie George, Maro Itoje and Elliot Daly should all play a part once they return from Six Nations duty, especially with places in the British and Irish Lions squad for the summer's scheduled Test series against South Africa up for grabs.

"I've spoken to Warren Gatland [British and Irish Lions coach] and he's very comfortable with the game-time our players have had," said McCall.

"Hopefully our England lads will get picked against France and Ireland and play at least four of the eight remaining league games, plus two very meaningful, competitive final games if we make the top two.

"They won't play in every game but they will play enough. [If so] I think they'll arrive on a Lions tour ready to go."

Nevertheless, Saracens' younger players and those with previous Championship experience will provide a crucial element in their bid to secure an immediate return to the top flight.

"Alex Lewington and a few others led a presentation last week about what to expect from the clubs we will face," McCall revealed.

"Alex in particular spoke about the emotions of being part of a club that has to deal with the impact of relegation (with London Irish in 2016) and the focus on the next challenge.

"But he also put all the clubs we will be facing on a map, to show where they are and what they represent to their communities.

"It reminded all of us that we've come through clubs just like them, where we know there are so many brilliant people who work hard both on and off the pitch.

"We're not above playing at these clubs and that's the attitude we've got to take into all of this. We need to show respect and go about our business in the right way."

Playing through a 'precarious' future

While Saracens' focus will be on making an immediate return to the Premiership, for a number of other Championship clubs, their goal will be just getting through the season.

Cuts to Rugby Football Union central funding, coupled with the uncertain nature of government loans to help get the second tier restarted, almost forced a number to sit the season out completely.

London Scottish will not be playing after electing not to invest in Covid-19 testing, but will be allowed to return for the 2021-22 campaign after relegation was scrapped for this season. 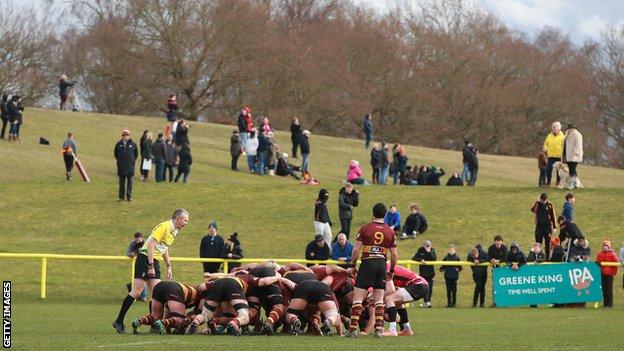 Elsewhere, Bedfordshire club Ampthill, who are in just their second season at this level, were among those threatening to sit out earlier this year.

They have chosen not to take up the government loan, which is thought to be around £750,000 per club.

Along with neighbours Bedford Blues, they have been helped by their own fans raising more than £75,000 to fund Covid-19 testing for the rest of the season.

"We wouldn't take a loan that we couldn't afford to pay back," Ampthill director of rugby Mark Lavery told BBC Look East.

"We're still very much in a development phase. We're a community rugby club with just over 1,000 paying, playing members and we would not saddle the club with debt that would put the whole of it at risk."

Lavery describes the financial landscape of the Championship as "pretty precarious" at a time when RFU central funding is being cut from £534,000 to £288,000 per club by the 2022-23 season.

"Literally up until three weeks ago, there was a high probability we couldn't have afforded to take our place within the competition," Lavery revealed.

"We're very privileged to be at the start line and without the support of our community and district we just wouldn't be there, so it's actually really very humbling."

Bedford Blues, meanwhile, have taken up the government's loan offer, which will not have to be repaid for the first two years.

Their director of rugby Mike Rayer is confident the club's board have made the decision after working hard to get the terms of the loan right.

But he also believes a time has come to drastically rebrand the competition.

"We can draw a line in the sand now and over this next 18 months get to grips with where the Championship sits within English rugby union," he told BBC Look East.

"With the broadcasting of the promotion play-off alone, they will be the two biggest games of this shortened season.

"That's what the public and broadcasters want, a bit of jeopardy - winner takes all or even relegation."