School dinners: Beef off the menu as costs rise 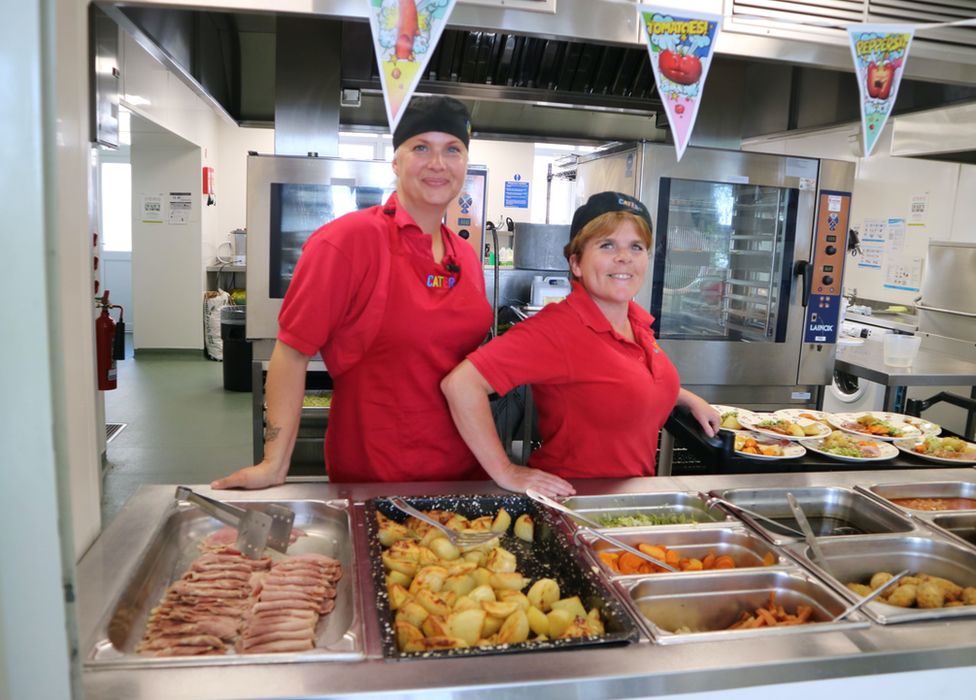 Some caterers have switched to cheaper imported meats, and changed the fruit and vegetables on offer.

Laca, the school caterers' association for England and Wales, said the quality of meals was under threat.

In England, the government has just increased the funding for free school meals for the youngest children.

Until recently, Laira Green Primary School in Plymouth served local Cornish beef for its roast dinners every Thursday, but has now switched to gammon as a cheaper alternative.

Chicken is on the menu less often, replaced instead with cheaper turkey.

The school is one of almost 70 around the city served by the same catering company, which is changing menus because of price rises.

Head teacher Bernadette Kennedy said she was pleased the school was still managing to offer a "healthy roast meal", but added: "Some children stopped having roast dinner, and when we asked them why, they said they really liked the roast beef and Yorkshire pudding.

"That's sad, because with the roast meat comes a lot of offer around vegetables that they might not otherwise try."

The roast dinner, with a courgette croquette as the vegetarian option, is popular with the children.

Dylan in Year 5 had cleared his plate of roast dinner and said he liked the potatoes best.

He said: "I like the taste of the food and the vegetables. It fills your stomach up and gives you energy."

More than half of the children at the school are entitled to free school meals, and teachers say for some it can be their only meal of the day.

Even the potatoes have become more expensive as their caterer's Cornish supplier has faced rising fertiliser and fuel costs.

Laca asked its members about costs and shortages, and more than 160 companies provided information.

Between them they are responsible for the meals of more than a million pupils.

More than 60 of them said they had either switched from British meat to meat from abroad, or were considering doing so soon.

Grocery basics such as pasta, oil, frozen vegetables and fish were among the worst affected, in this large snapshot of the impact of rising food prices on school dinners.

Caterers reported seeing cost increases of between 20 to 30% for many products, with prices often fluctuating weekly.

The cost of minced beef, used to make lasagne or burgers, rose by 11% overnight in recent days, it said.

Brad Pearce, national vice-chairman of Laca, said the long-term impact of Covid, the war in Ukraine and rising fuel costs were all having an effect on what his members could put on school plates.

Many caterers were also struggling to recruit staff for school kitchens.

"The costs that are coming forward make it impossible for us to continue, unless some very difficult choices are made," Mr Pearce said.

Those included moving to more processed food or buying meat from abroad, he added.

"That's something that we don't want to do, but in order to keep food on the plate we have to look at all options."

Laca members provide 80% of the school catering service in England and Wales.

The rising costs matter because the budget is limited by what parents are willing to pay, and government funding.

In England, all state school pupils from Reception to Year 2 are entitled to free school meals during term time.

The government pays for these universal free school meals for infants at a daily rate which is now £2.41 for each child, following a 7p increase from April this year, an extra £18m a year.

For children in England from Year 3 onwards, only those from families on the very lowest incomes are entitled to a free meal at school, and the daily rate for that is currently about £2.47.

Child poverty campaigners as well as school caterers say costs are rising faster than funding, at a time when for many families a hot meal at school has become more important.

In Wales, the rising cost of food may have a knock-on effect on the funding needed for ambitious plans to offer a free school meal to every child in primary school from 2024.

In its response to the independent food strategy in England, the government did not address a call to allow all children from families receiving universal credit to have a free hot meal at school.

There are mandatory food standards which school meals are meant to meet, and caterers say they are still managing to do that, but it is becoming increasingly difficult, although they are allowed to substitute foods.

In response to the concerns the government said it had "expanded access to free school meals more than any other [government] in recent decades".

"We will also continue to keep eligibility under review and work across government to address rising costs, building on over £37bn announced to help the most vulnerable."

Have you noticed a change in your child's school meals? Tell us by emailing: haveyoursay@bbc.co.uk.