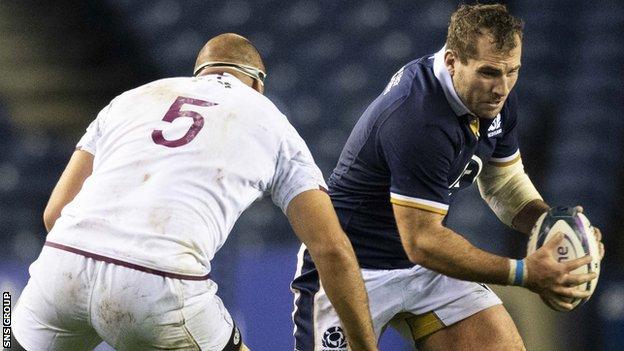 Scotland warmed up up for next Saturday's Six Nations game against Wales with an eight-try win against Georgia at Murrayfield.

Tries from Darcy Graham, Fraser Brown and Hamish Watson had the hosts 17-0 at the break.

Finn Russell's return from the bench capped a positive night for Scotland.

The fly-half came on midway into the second-half for his first appearance for a year, after he played no part in the Six Nations after a breach of team protocol led to a falling-out with head coach Gregor Townsend.

Next up for Scotland is their final match of the interrupted Six Nations against Wales in Llanelli a week on Saturday, before they commence their autumn Nations Cup campaign.

Playing their first Test since the Six Nations win against France at Murrayfield seven months ago, it would have been fair to expect some rust from Scotland.

Aside from Graham's quick tap and sharp finish after just two minutes, the opening quarter was heavy going, with neither side managing fluid rugby.

What was evident was Scotland's desire to build on their work in the Six Nations earlier this year, when they demonstrated a harder edge up front and a newly stubborn defence.

The forwards were asked to do the heavy lifting, and with due reward. Brown - captaining Scotland for the first time - was the beneficiary as a well constructed maul rumbled over after a lineout as Townsend's side took on Georgia at their own power game.

Georgian ill discipline was a theme, as they reached double figures for penalties conceded before the half-time whistle had even sounded.

Scotland capitalised on one of many advantages after battering through phases close to the try-line, as Scott Cummings fed the impressive prop Rory Sutherland, who put in Watson to finish in the corner on 32 minutes.

But another opportunity was missed in first-half overtime, as Brown and Cornell Du Preez - who replaced the injured Matt Fagerson - shoved over, but a TMO review was unable to clarify who had managed to ground the ball.

The second half started in the same scrappy manner, but came to life when winger Tabutsadze caught scrum-half Lobzhanidze's lofted pass after four minutes to sprint in for a score, which was confirmed when a TMO review showed Cummings' touch prevented the final pass from being judged forward.

But any notion of a spectacular comeback was quickly quashed when Brown dropped over from the back of a maul as Scotland reasserted their dominance at the lineout.

That stretched Scotland's lead back to 15 points, and it was then time for Russell to make his long-awaited return for the national side.

The Racing fly-half trotted on with a broad smile on his face for his 50th cap, but slotted into the inside centre position vacated by James Lang, as Hastings remained at 10. He made an instant impact with two brilliant floating passes creating overlaps which Scotland failed to capitalise on.

But it was the lineout maul again which got Scotland over the line and on course for victory. McInally had replaced Brown and took his place at the back of the drive to flop over, with Hastings finding the mark with his conversion after missing the previous three.

After seeing little of the ball for the first hour, Scotland's back-line were let loose against a tiring Georgia defence in the final quarter to cap can emphatic victory.

First, Van der Merwe careered on to Russell's inside ball to charge under the posts for a debut score, before Graham added his second of the night after replacement scrum-half George Horne's soft hands put him in at the corner.

Kinghorn's try rounded off a powerful second half and was arguably the pick of all eight tries. The full-back chipped over the Georgia defence - by this point down to 14 men after a yellow card - from deep, and managed to flick the ball back up for himself to trot in and touch down.

New drama - Roadkill: Can a government minister outrun the secrets of his past?Bringing Football Back: Behind the scenes of a club reborn

VIDEO: Players speak after falling to the Longhorns