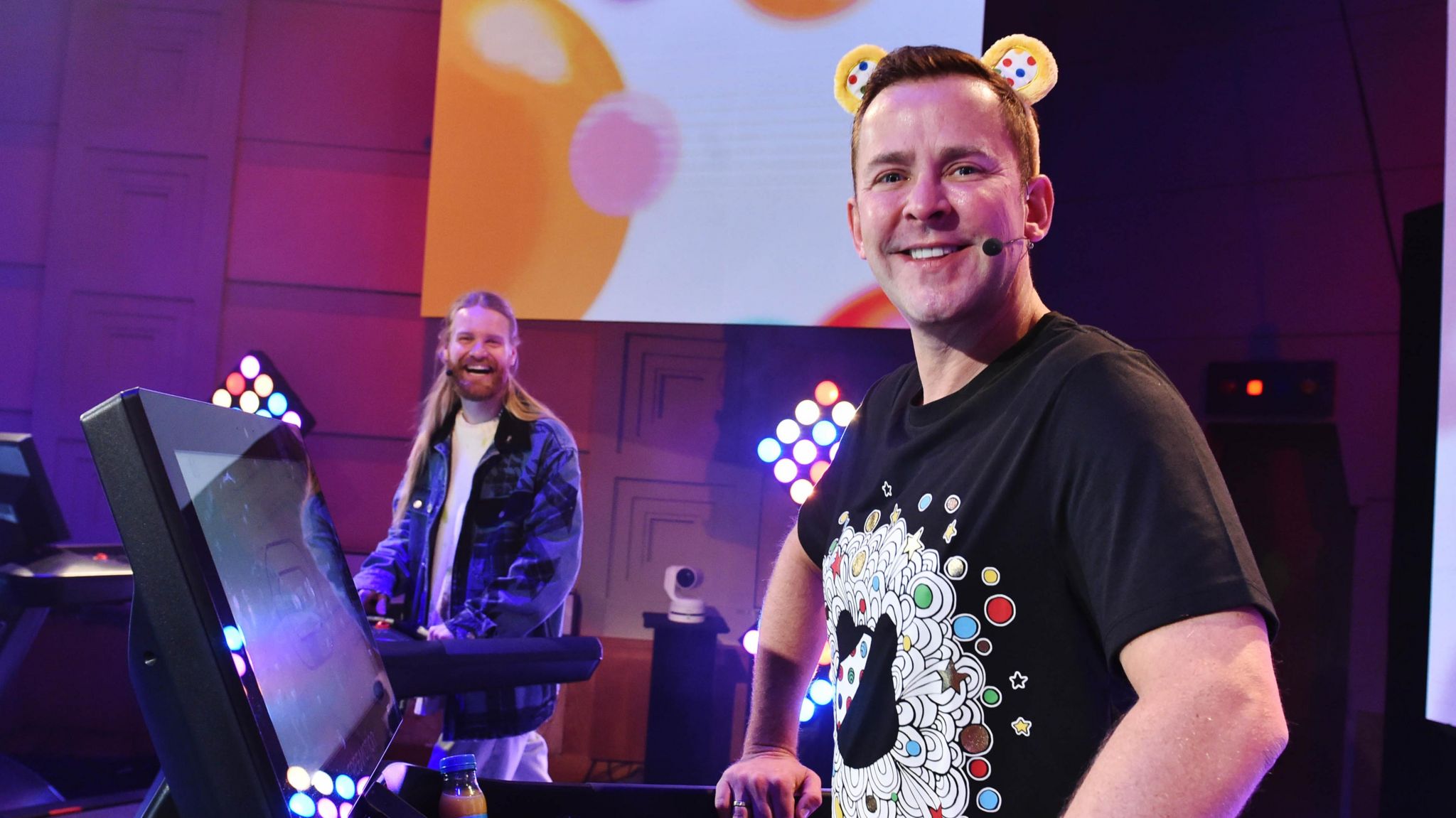 F﻿itness guru Joe Wicks stopped by to give some encouragement

Slide 1 of 5, Scott Mills and Sam Ryder on treadmills, S﻿cott "Tread" Mills is raising thousands for BBC Children In Need

D﻿J Scott Mills says he "can't believe" the amount of money the public have donated as he attempts a gruelling treadmill challenge for Children In Need.

T﻿he DJ is walking, jogging and running for 24 hours - and even presented his own Radio 2 afternoon show while on the move.

A﻿fter nine hours, he had already raised £178,517, but admitted the overnight shift would test his endurance.

“I don’t even know whether I’m going to be able to complete it. ﻿Let's see what my legs and feet can do."

T﻿he challenge is being streamed live on the BBC iPlayer.

Mills will cross the finish line at 08:20 on Thursday.

Along the way, he is receiving moral support from friends and colleagues including Olly Murs, Gemma Collins, Sara Cox and Louis Theroux, who had some advice on how to prepare for the coming hours.

Comedian Tim Vine lifted his spirits with a collection of walking puns.

Among them was this: "This Dutchman was wearing inflatable shoes. He went for a run and he popped his clogs."

And sports coach Joe Wicks - who completed his own 24-hour Children In Need challenge in 2020 - stopped by with some words of encouragement.

"When the morning comes and you see the money you've raised, the adrenalin kicks in and you feel so proud of yourself."

So far, M﻿ills had faced his challenge with good humour, admitting he'd invested in a job lot of nipple plasters before arriving at BBC Broadcasting House.

"I used to run quite a lot - so I did a couple of half marathons - and they were essential.”

The DJ covered the same distance as a half marathon, 13.1 miles, in his first four-and-a-half hours, putting him on target to reach 69 miles by Thursday morning.

S﻿peaking to BBC News from his treadmill at the eight hour point, Mills was in good spirits, thanks to the combined effects of a five-minute break and a giant doughnut.

"﻿I just stepped outside for the first time and it was actually great," he said. "I'm going to do that more often, because I forgot there was an outside world.

"In here, in the studio, it's like Vegas - it could be any time of day.

"Outside is grey, damp and cold, but it's not in here, therefore the change of scenery was brilliant."

H﻿owever, he admitted he was starting to tire.

"﻿My words are coming out and I'm not quite sure what I'm saying. But I'm still walking.

"﻿Delirium will set in around 4am. Then, when I see Zoe Ball for her breakfast show tomorrow morning, I'll be like, 'OK, we're good. We haven't got long to go.'"

His co-presenter Jeremy Vine had other concerns, however.

“If the bosses see this," he joked, "they’re going to work out we can power the whole station by running while we broadcast.”