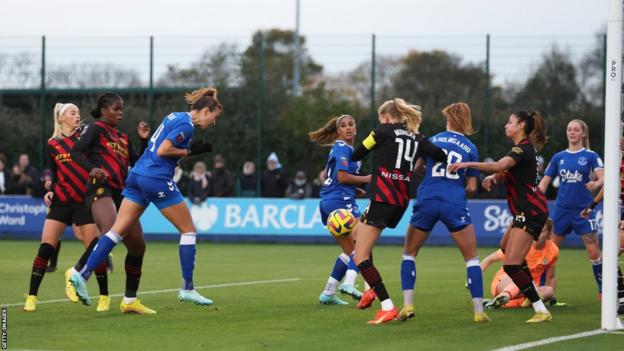 Shaw picked up a looped ball from Leila Ouahabi as Everton goalkeeper Emily Ramsey came out of her goal to meet Shaw, leaving an empty net for the Jamaican to square the ball to Julie Blakstad who slotted home.

Everton's equaliser came from a corner and a scramble in the box saw Sandy MacIver try to punch the ball away, but it fell straight to Rikke Sevecke who powered a header into the back of the net.

Shaw tapped in the rebound after Laura Coombs fired an ambitious shot which smacked off the post to restore City's lead just half-time.

This is City's fifth consecutive victory in the Women's Super League, despite being without injured winger Lauren Hemp, and moves them fourth, level on points with Manchester United in third.

Meanwhile, the loss was Everton's third consecutive home defeat of the season and leaves them seventh in the WSL.

Replacing England's top goalscorer Ellen White, who retired after the summer Euros, as the starting number nine at City is no mean feat but it is a mantle Shaw has taken on with ease.

Her goalscoring form continues to devastate WSL teams as she notched her eighth goal, the most in the WSL, and caused Everton trouble throughout.

She sent in a cross for Blakstad whose header went over the bar but, with four of Shaw's goals this season coming from headers, City would have preferred a role reversal.

Shaw also had a goal ruled out for offside when she made a run deep into the Everton half and her shot from near the byeline found the back of the net.

City, whose brilliance has gone somewhat under the radar this season with Arsenal, Chelsea and Manchester United dominating the headlines, have won their past five consecutive league games after back-to-back losses at the start of the campaign.

They had the chance to extend their lead when a cross ricocheted off the post to Kelly, who attempted an overhead kick which was helped along by Blakstad but her header hit the post.

Unlike last season when City struggled for depth because of injuries, they seem to be clicking with a strong starting line-up and options on the bench.

Everton have now lost all 13 WSL matches against City - the best 100% record one team has against another in the competition.

The Toffees have also not managed to win a game this season when conceding the first goal.

They did have chances to get something from the match and the additions of Aggie Beever-Jones and Gio made an impact late on while the Toffees were fairly solid defensively.

With just one goal separating the two sides Everton had chances to level proceedings when Gio was through on goal but opted to square instead where Ouahabi blocked, before Beever-Jones smashed a shot into the side-netting.

A frantic final 10 minutes saw both sides go close as Ramsey was called upon to save a Kelly shot heading for the top corner, after Beever-Jones had another chance to level but her shot was weak.

They were missing perhaps a moment of brilliance from someone like Jess Park, who, after scoring on her England debut last week, was unable to play against her parent club.

Attempt blocked. Agnes Beever-Jones (Everton Women) left footed shot from the left side of the box is blocked. Assisted by Clare Wheeler.

Attempt missed. Deyna Castellanos (Manchester City Women) right footed shot from the right side of the box is too high following a corner.

Attempt saved. Laia Aleixandri (Manchester City Women) header from the centre of the box is saved in the top centre of the goal. Assisted by Chloe Kelly.

Attempt missed. Lucy Graham (Everton Women) right footed shot from the left side of the box misses to the right. Assisted by Gabrielle George.

Kerstin Casparij (Manchester City Women) wins a free kick in the defensive half.

Attempt missed. Khadija Shaw (Manchester City Women) header from the centre of the box is too high. Assisted by Chloe Kelly with a cross.