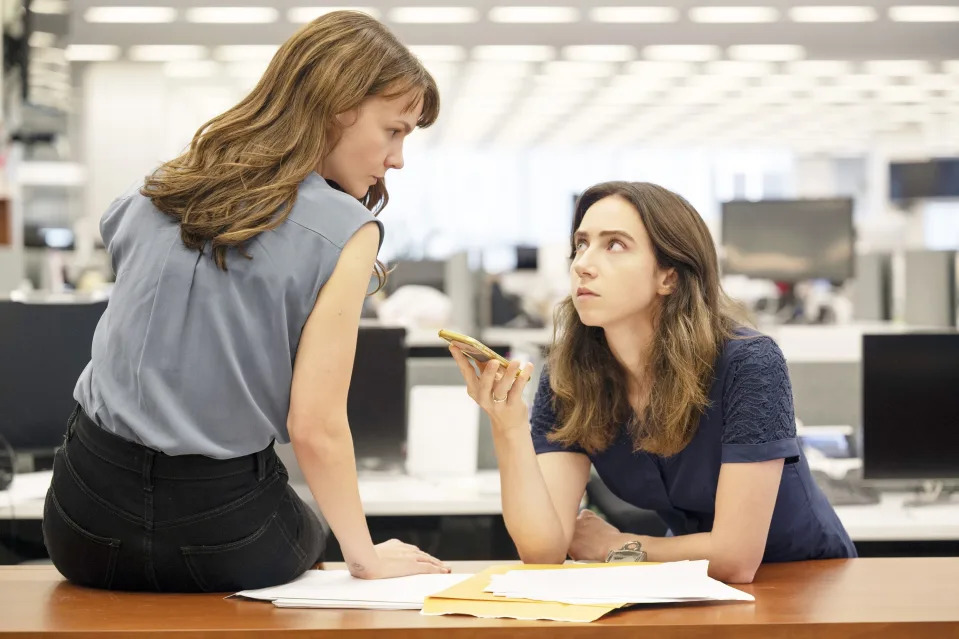 It's been five years since New York Times reporters Megan Twohey and Jodi Kantor finally published what many in Hollywood privately knew: Oscar-winning producer, Harvey Weinstein, had a pattern of sexual harassment allegations stretching back for decades and involving such high-profile stars as Ashley Judd and Rose McGowan. Following their blockbuster first story on Oct. 5, 2017, the duo continued to expose Weinstein's various crimes, as the former Miramax head began a prolonged New York court battle that ended with a guilty verdict and a 23-year prison sentence. (He's currently being tried in Los Angeles on sexual assault charges.)

On the fifth anniversary of the beginning of Weinstein's downfall — which galvanized the already-existing #MeToo movement — moviegoers can revisit how the journalists cracked the case in She Said, a powerful dramatization of their 2019 book. Directed by Maria Schrader and starring Carey Mulligan and Zoe Kazan as Twohey and Kantor respectively, the movie arrives in theaters as many in the industry are taking stock of how far we've come, or not, since the story first broke.

For the record, Mulligan thinks that Hollywood in 2022 is a different place than it was in 2017.

"Concrete changes have happened," the Oscar-nominated actress tells Yahoo Entertainment. "There are now things like intimacy coordinators, anti-harassment workshops and code of conducts before you start shooting a film. All of that stuff is now here for good and I think that's crucial. We talk a lot about how crazy it is that all of it didn't exist before! And all of those things are the result of this story."

Interestingly, Kazan first went on the record about sexual harassment in Hollywood in the summer of 2017 — months before the Weinstein story broke. "A journalist asked me about sexual harassment... and I had never been asked about it before," she says, referring to a profile published in The Guardian. "It didn't really occur to me that it was something I should be nervous speaking up about. I wasn't speaking to any specific situation, but it just seemed like such a matter-of-fact part not just of my experience in the industry, but a woman's experience period. You have only to look at how little girls are talked to about consent to understand that it is something that is pervasive."

At the time, Kazan — who until recently had an active Twitter feed — remembers being bombarded by online trolls for her comments. But she also knew that her words had struck a chord. "My dad told me that the teenage girls who lived next door had spoken to him and said how meaningful it was that I had spoken up about this. That really helped heal the fear that I had had about speaking up. In 2022, it's very easy to look back and think it was inevitable that Harvey Weinstein would face some consequences for his actions, but I don't think it was inevitable at all. It took incredible bravery and incredible willingness for these two women to put themselves and their reputations on the line."

While Weinstein is in prison and will likely remain there for the rest of his life, other high-profile Hollywood personalities who have been accused of sexual harassment and abuse are finding a way back to work, including Louis C.K., James Franco and Kevin Spacey. The men at the center of those stories either avoided having their cases brought to court or, as in Spacey's case, have been tried and found not liable. Asked whether Hollywood should provide consequences for known abusers and harassers when the legal system can't, She Said co-star Patricia Clarkson — who plays Rebecca Corbett, the New York Times editor that oversaw the Weinstein story — suggests that those actors will never truly be a part of the industry again.

"They might be finding their way back, but I don't think they'll ever really be back," Clarkson says. "In Hollywood, the blows are too heavy now; I don't think many people can get up from those blows. There are also so many good people in our industry that need to work and are better people. Why are we trying to resuscitate men who have committed felonies? Why, when we have so many good people in our industry to rely on and move forward with? Let's keep this ship going, let's keep it balanced and let's keep equality right where it is."

"I do believe in forgiveness, but I think that some of these men are unforgivable because it went on for so long," Clarkson continues. "It wasn't like one night or one moment in their careers; this was a repetitive behavior that many people in their lives condoned. Not anymore — not anymore." 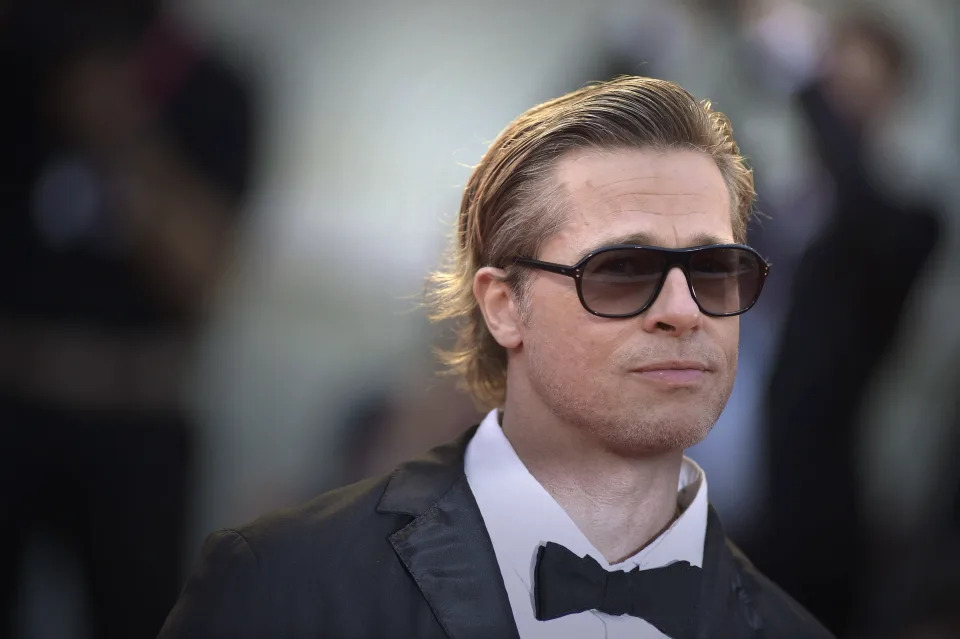 Brad Pitt attends at the 2022 Venice International Film Festival in September. The actor is a credited producer on She Said, and is currently facing assault allegations. (Photo by Rocco Spaziani/Archivio Spaziani/Mondadori Portfolio via Getty Images)

It's worth noting that a specific aspect of She Said is representative of the challenges facing the entertainment industry as it attempts to chart a course through the #MeToo landscape. Brad Pitt is one of the film's credited producers, and the Once Upon a Time in Hollywood star is currently facing allegations of having assaulted his ex-wife, Angelina Jolie, in 2016. Asked whether Pitt's involvement in the film speaks to the complexities of where Hollywood is now, Schrader agrees that contemporary industry realities are "complex."

"I have to say, one of the many reasons I'm so proud of being part of this project is that it doesn't shy away from its complexity," the filmmaker says. "I think we've all learned a lot during the last five years, and we all have the possibility to change perspectives. Hollywood and its studios and its powerful companies have the duty to take on projects which are in a societal conversation and not shy away from them. This is what we expect from the film industry: to speak about things even if they are complex and delicate." 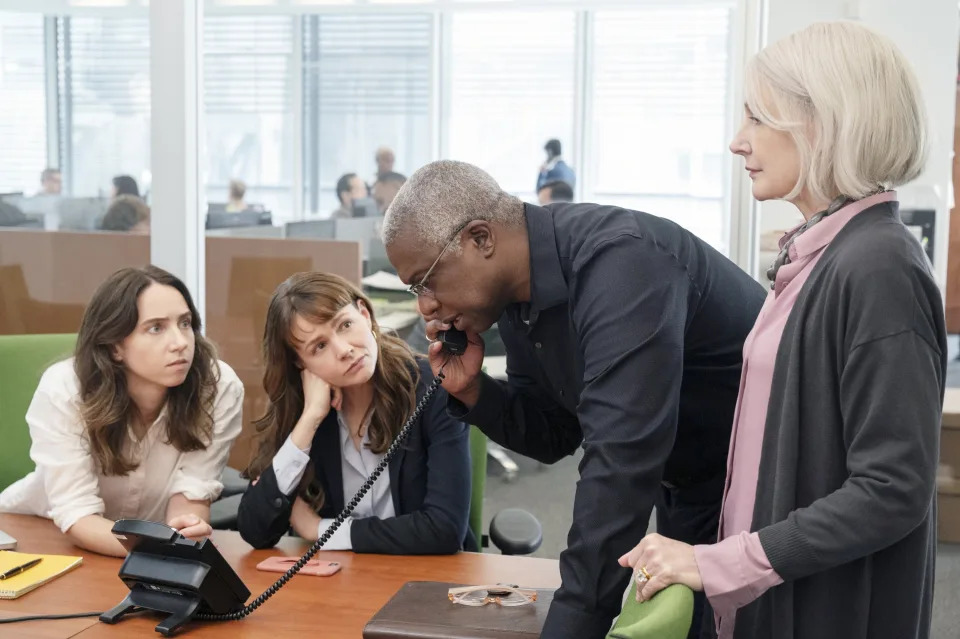 Beyond its impact on Hollywood, Twohey and Kantor's reporting represented a major win for journalism — an industry that's been left battered and bruised by corporate takeovers, harsh economic times and the relentless criticism of politicians like former President Donald Trump. Much like its cinematic forbearers — Alan J. Pakula's 1976 classic All the President's Men and Tom McCarthy's 2015 Oscar-winner Spotlight — She Said reminds moviegoers how impactful carefully-reported news stories can be, particularly at a time when distrust in the media is running high.

"Documentation is what's important," notes Andre Braugher, who plays former New York Times executive editor Dean Baquet. "One of the themes of the film is that without documentation, it becomes a 'He said, she said,' story. It's the importance of a paper trail that moves these investigations from solely accusations of bad behavior to documentation of pervasive industrial practices is. We live in an opinion-driven world. The attempt to discover and propagate facts is of paramount importance for our democracy, period."

"The film speaks to what collective action can achieve when backed by an institution like The New York Times," Mulligan concludes. "It was really eye-opening to see the incredibly high standards that a place like the Times has in terms of how they report. The film does a great job showing how much it takes to be able to run a story like this, and that words really matter and the truth really matters."

She Said premieres Nov. 18 in theaters