Instead of buying all of her Thanksgiving meal in one fell swoop, Rebecca Raymond has purchased components of the feast here and there, each week, to keep her costs down.

Raymond, 48, lives in Montgomery in the state of New York with her husband and son. She has been unemployed since January, though she is slated to begin a new job just after the holiday. Her husband works, but his pre-tax salary is enough to keep the family from qualifying for assistance, like the federal Supplemental Nutritional Assistance Program (SNAP), which provides benefits for low-income families to help them buy food, or food banks, Raymond said. “We didn’t get approved for the food pantry distribution for Thanksgiving,”  she posted on Twitter on November 15.

“It doesn’t take into consideration rent, utilities, heat, insurance,” Raymond said of applications for food assistance. Raymond and her family have cut back significantly on groceries as prices have shot up this year.

“We have been eating a lot of pasta, chicken (when it’s on sale), hamburger casseroles (cheaper meat) and breakfast for dinner,” which, Raymond said in an email, were less expensive items than what she used to buy. “Even the cost of milk is getting a little out of hand,” she said, adding, “I know it will get better at some point, but with the income restrictions on food banks and SNAP benefits, people still can’t afford to feed their families as well as they would like.”

Since last Thanksgiving, grocery prices have jumped 13 percent in the United States, according to the latest Consumer Price Index data from the Bureau of Labour Statistics. And just about every component of a traditional Thanksgiving meal has increased in price significantly over the last year. That has added to the woes of Americans already struggling with stubbornly high inflation and is putting a dent in a holiday where the focus is food, family and friends.

And if you think making your own desserts will be cheaper? Flour is up 25 percent, butter 27 percent, and eggs a whopping 43 percent.

“The rising cost of the ingredients has caused us to scale back a bit,” Raymond said. Although she said she had been able to source the ingredients for four of her usual side dishes, one had to go. “Mashed potatoes are normally on the menu, and both instant and produce potatoes are just not worth making,” due to cost. And she swapped out her family’s usual morning treats for a less expensive option. “Breakfast is usually pastries or cinnamon rolls – those have been replaced with blueberry muffins from a mix that I have in my cabinet,” Raymond said.

Her family will host a friend and the friend’s son without anywhere else to go but will not host anyone else. They are supplementing the groceries with a basket they received from her son’s school, she said. 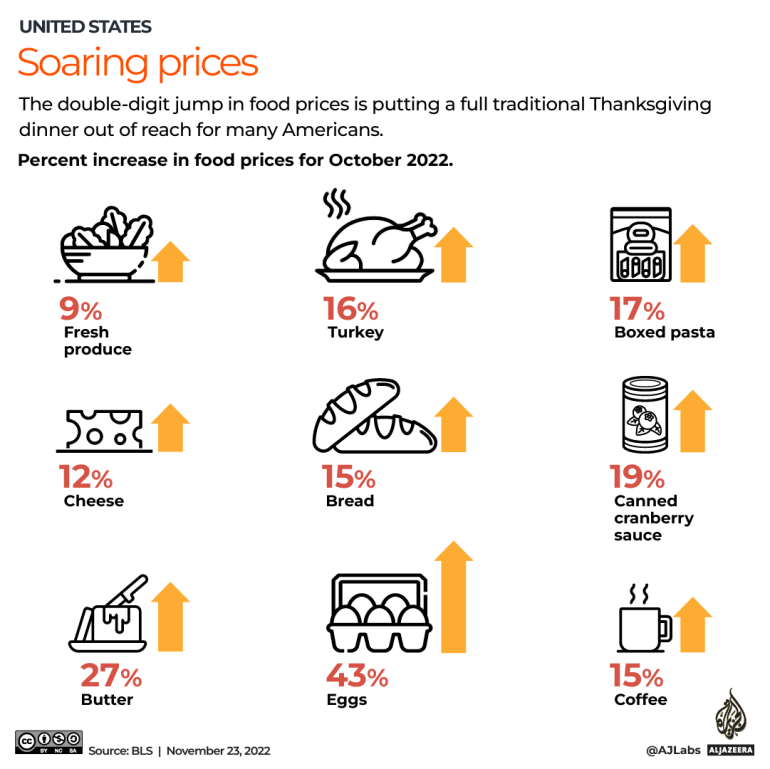 Some discount grocery chains in the US have taken steps to ensure that business does not slump during the holidays as prices continue to climb.

The US outlets of Aldi, the German grocery store chain, are doing a promotion in November called “Thanksgiving Price Rewind”, in which they have rolled back prices for holiday appetisers, desserts, sides, and beverages to their 2019 levels — in some cases, up to 30 percent off. “Why not attempt that additional side dish this year, or invite over a few more friends or family members?” said Dave Rinaldi, president of ALDI US, in a press release on November 1.

Kelli Jones of Pittsburgh, a cashier at an Aldi store there, said that she rang up $7,000 in groceries on Sunday during a four-hour shift at the register. “Grocery retail is bonkers the week leading up to Thanksgiving,” she said. “Customers are arguing with us over coupons and limits on butter and the way the receipt shows the markdown on the turkeys. But some are great — I got a fist bump and a pat on the back from a man when I helped him find his food stamp balance. So, there were high points.”

Walmart announced on November 3 that they would sell turkeys and some trimmings, including stuffing, canned cranberry sauce, and corn muffin mix, for their 2021 prices. The deals at the discount chain will extend through December.

Jump in demand at food banks

An August survey by Feeding America, a nonprofit network of 200 food banks and 60,000 food pantries, found that 90 percent of food banks reported increased demand for supplies this year due to rising grocery prices. 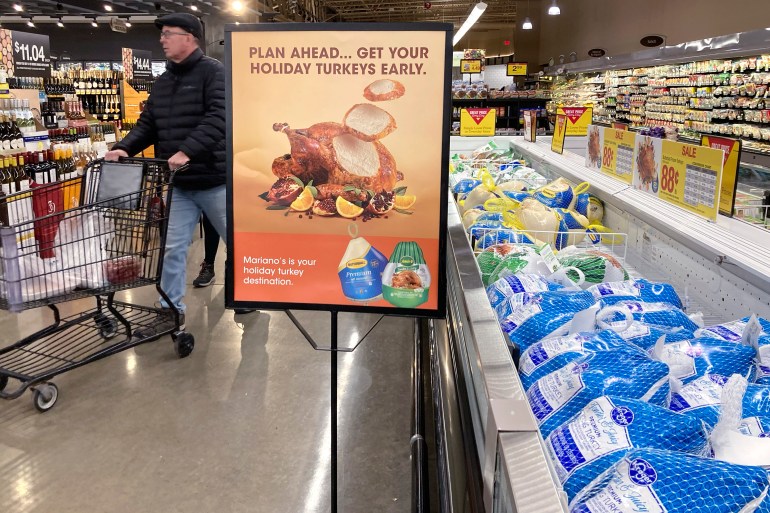 Cumming’s pantry is part of an interfaith network of 20 member pantries in Essex County, New Jersey, operated by Meeting Essential Needs With Dignity (MEND). It receives some food from MEND, including fresh produce and other fresh food, and some through partnerships with area businesses, like Panera Bread, a national chain that donates day-old bread.

As the pantry administrator, she also receives a stipend of $10,000 annually – an allowance that she returns to the pantry by purchasing food staples and anything else not covered by donations from local grocery stores or a distributorship to fill out the two bags that her pantry gives out weekly to each patron.

She also notes that not only have prices increased, but portions have shrunk. “All these companies, they’ve cut four to six ounces [113 to 170 grams] out of all of their stuff,” she observes. A bag of chips that now costs close to $5, she said, contains only 11 ounces (312 grams) when the same size bag used to hold 16 ounces (454 grams). The same thing with cereal, she said. A half-gallon (1.9 litres) of ice cream now contains just 48 fluid ounces (1.4 litres) of product. “Why would they want to change?” she asks. “Making more money for less product.”