Ouagadougou, Burkina Faso – Fatimata Lankoande was asleep in her home when a volley of gunshots woke her up.

“Everybody was scared and panicked,” said the 63-year-old. “People were running all around.”

Lankoande said the armed assailants arrived overnight on June 4-5 on three cars and more than 30 motorcycles. They first attacked workers at an informal goldmine on the outskirts of Solhan, a village in northern Burkina Faso. Later on, they went into the village market, burning shops and houses as they continued their killing spree.

“They started killing whoever they met,” said Lankoande, who has since fled to Dori, the nearest main town.

She said some aspects of what she saw were too painful to recount.

“It was the hardest moment I have lived through in my entire life,” said Lankoandee. “I know seven of the victims. They were young men … [The attackers] were so numerous and when they came into the market they also killed women … and they burned our hospital.”

The scale of the June 4-5 massacre in Solhan has sent shockwaves through a country that already sees fatal attacks on a near-daily basis. With dozens of men, women and children perished, it is the single deadliest attack in Burkina Faso since it was engulfed in 2015 by a worsening conflict that has spread across the Sahel region in West Africa.

The official death toll provided by the government stands at 132, but several news outlets citing credible local sources have reported the number is as high as 160.

An aid worker with knowledge of the situation in Solhan said, “We understand most of the bodies have been buried, so it is now very difficult to establish exact figures.”

A witness to the aftermath of the attack and the burials told Al Jazeera that all bodies have now been buried and said the numbers were thought to be higher than 132.

Regardless of the mismatch, the tolls bring the number of people killed by armed groups in Burkina Faso since the start of the year to more than 500.

Heni Nsaibia, an analyst for the Armed Conflict Location and Event Data Project, which monitors attacks in Burkina Faso, said the Solhan massacre illustrated how security across the Sahel has not improved despite the presence of thousands of international and regional troops.

He further pointed out to neighbouring Niger, where the civilian death just in the first two months of 2021 had already surpassed the number of people killed by armed groups “of any previous year”.

French, American and European troops have for years concentrated their efforts in the tri-border region, where the borders of Mali, Niger and Burkina Faso converge.

Nsaibia acknowledged that there has been “some progress” in that area, but said, “This over-focus on the tri-state border [region] tends to neglect the other areas where jihadi groups are increasingly entrenched or expanding their operations.”

No armed group, including the two largest operating in the region – Jama’at Nasr al-Islam wal Muslimin (JNIM) and Islamic State in the Greater Sahara (ISGS) – has claimed responsibility for the Solhan massacre. On Tuesday, JNIM released a statement denying they were responsible and condemned the attack.

“Even though JNIM has officially denied involvement, there are lingering suspicions that JNIM fighters may have carried out the attack,” Alex Thurston, assistant professor of political science at the University of Cincinnati and expert of armed groups in the Sahel, told Al Jazeera.

“That possibility raises questions about whether the central leadership has full control over all units,” he said. 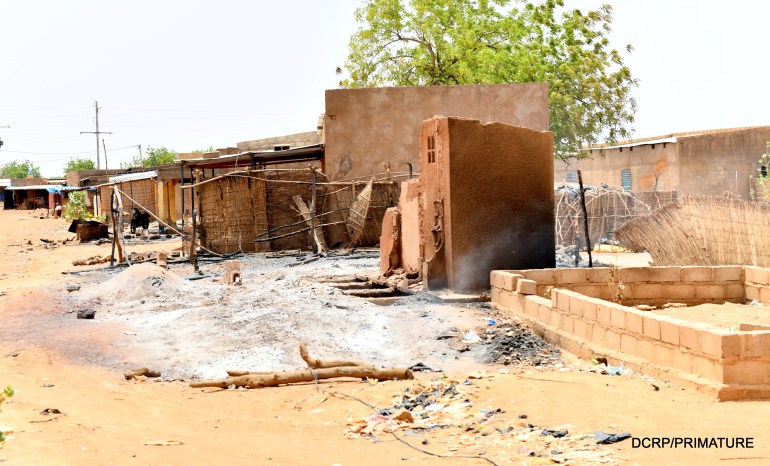 Damaged buildings and huts at the site of the attack [[Burkina Faso Prime Minister’s Press Service/Handout/Reuters]Following the Solhan attack, the streets of the capital, Ouagadougou, took on a reserved tone as the government declared three days of national mourning.

Armed groups linked to ISIL and al-Qaeda have overrun large portions of the north and east of Burkina Faso, which is seen by many as the epicentre of the wider conflict in the region.

Asked about the significance of the Solhan attack, Thurston said, “Many actors in the Sahelian conflict are using brutality in a bid for control over civilians, but the main effect is to make the overall crisis more fragmented and violent.”

Analysts and rights groups say the attack appears to have targeted members of the Volunteers for Defence of the Fatherland (VDPs), government-backed civilian militias helping in the fight against the armed groups.

Days after the massacre, Siaka Coulibally, a Burkinabe analyst, told Al Jazeera it was “still difficult to find an official or rational explanation” for the attack.

“But the first explanations tend to suggest that it is the attacks against the VDPs that continue,” Coulibally said. “In the east, there were whole villages destroyed and their populations killed because these villages seemed to be villages of origin of the VDP and their families.”

The attack targeted an informal goldmine site, one of the about 700 to 1,000 that exist in Burkina Faso. Fighters are known to target the mines to gain funds. The government has called for a stop to gold mining in the district of Yagha where last week’s attack happened.

Authorities in Yagha have also placed a ban on the use of motorcycles, the favoured method of transport for fighters. The tactic, which was previously used by Nigeria in its fight against the Boko Haram armed group, is meant to make it easier for security forces to identify suspects.

The humanitarian effect of the Solhan attack has also been significant, adding to a snowballing crisis that had already caused the internal displacement of 1.2 million people.

“Fearing for their lives, over 3,300 people fled to the nearby villages of Sebba and Sampelga, among them more than 2,000 children and over 500 women,” read a statement by the United Nations’ refugee agency.

“They arrived with few or no belongings. The majority were generously welcomed by local families who are sharing what little they have.”