Both live in South Korea. Both got their COVID-19 vaccinations in July when they were overseas – one in the United States, and the other in France.

Both had to go through quarantine when they returned to Korea, but the authorities accepted the ‘fully vaccinated’ status of only one of them, which meant that while that person was allowed to go to high-risk venues like clubs and bars, and avoid future quarantines, the other found their daily life severely restricted.

The first is a South Korean citizen and the other a foreigner.

“It feels like it’s kind of unfair and in some way discrimination,” said Laurane Batany, a French national who arrived in Korea recently and was vaccinated in her home country in July.

And her Korean counterpart agrees.

“I cannot find or understand any rational reason to treat foreign residents differently from Koreans for exactly the same certificate. It’s as if they think foreigners are more likely to lie. It’s a disgrace and clear discrimination,” Choi Il-woo said, a Korean national who was vaccinated in the US in July.

Vaccine recognition is crucial in a South Korea that this month revised pandemic-related restrictions under a policy of what it calls “living with COVID-19”.

The new rules include a COVID-19 pass that allows the fully-vaccinated entry to facilities such as night clubs, bars, gyms, and sport venues. This is the pass – an app called COOV – from which foreigners vaccinated outside Korea are excluded. 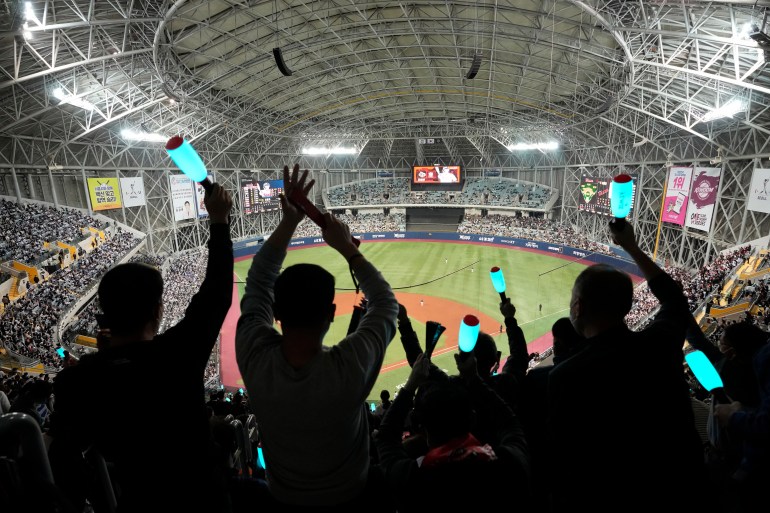 The COOV app is crucial for access to sports venues, gyms and other places considered ‘high risk’ [Ahn Young-joon/AP Photo]

Korean officials have raised concerns about the credibility of vaccinations done beyond its borders and require that foreigners go to the Korean consulate in the country where they have been vaccinated to get a “quarantine waiver” before they can enter South Korea. That exemption means their vaccine can be registered in the COOV app.

“As there is difficulty in verifying the authenticity of a vaccination certificate issued from abroad, a vaccination certificate issued from abroad is recognised by the Korean government only when a quarantine exemption issued from diplomatic offices of Korea overseas is submitted in the case of a foreign citizen,” said a statement from the Korea Disease Control and Prevention Agency that was given to international journalists.

South Korea also has a list of 16 countries, including Myanmar, South Africa and Chile, from which no quarantine exemption is even possible.

As the world slowly opens back up and international travel shows signs of a rebound, countries are adopting their own and sometimes contradictory policies, despite the WHO advising governments to avoid exclusionary policies and recognise vaccines equally across borders.

Some other countries, have also placed limitations on which vaccines they are willing to accept, with some not recognising those inoculated with the Chinese vaccines Sinovac and Sinopharm or the Russian vaccine Sputnik-V.

“Some of the COVID-19 policies in South Korea right now are literally as bat s**t crazy as the ones in North Korea,” Chad O’Carroll, journalist and founder of the North Korea-focused media organisation NKnews.org, posted on Twitter.

Complicating the issue, some foreigners in South Korea are not even eligible for the waiver. Students are among them.

“Well, because I’m here as a student, and students when they arrive have to go through quarantine, I couldn’t get a quarantine exemption,” Batany told Al Jazeera.

Students simply “are NOT eligible to apply for quarantine exemption”, as the Korean embassy in Finland puts it in bright red letters on their website.

Unable to be registered in the Korean system and download the COOV app to prove her status as double-jabbed, Batany has been shut out from certain parts of Korean society.

“I tried to enter a kind of dance club and bar, and the person at the entrance told us that we couldn’t enter with our foreigner proof of vaccination, we had to get the COOV app. We couldn’t get our vaccinations recognised,” she said. 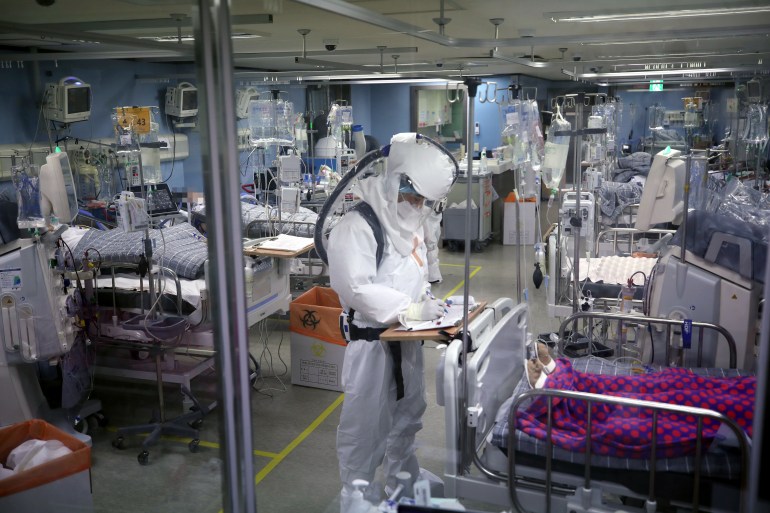 The fact that the rules only apply to foreigners living in South Korea and not citizens has upset many.

In a press conference last week, health officials tried to explain the best they could that the restrictions were not xenophobic but of a practical nature.

“It’s hard to carry out the confirmation process, some countries have standardised formats for verification, while other countries accept various proofs from clinics, hospitals, or local governments,” said Sohn Youngrea, a spokesperson for the ministry of health and welfare. “That is why we’re asking for waivers issued by our offices overseas.”

Not everyone agrees, however.

The British ambassador has criticised the logic of the Korean system.

The vaccine pass policy has rekindled concerns about official discrimination against foreigners in a country, where only about three percent of the population are of non-Korean origin.

Earlier this month, it emerged that the small city of Gimhae ordered that all foreign children had to be tested for coronavirus after a rise in cases connected to kindergartens. The online backlash prompted the city to retract the order and apologise.

“We are sorry for causing inconvenience to the parents of foreign children,” the local government said in a statement, according to the South Korean news service Yonhap.

There are currently no laws in South Korea against discrimination on the grounds of ethnicity, race, or sexual orientation.

Legislation has been proposed numerous times since 2007 but has failed to make headway because of resistance from conservative politicians and religious groups.

“This law is very common and basic law, it’s a law based on equal rights given in the Korean constitution,” said Lee Jong-geol, co-chief of the South Korean Coalition for Anti-Discrimination Legislation. “[The vaccination controversy] will help Korean people to garner more interest, to understand why they need an anti-discrimination law.” 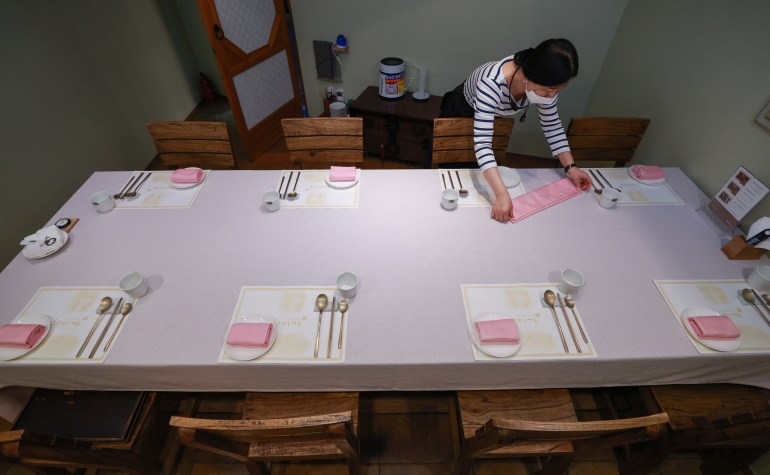 South Korea has been easing restrictions for the fully vaccinated, but people must use an app to show their status and check in to venues such as restaurants and bars [File: Yonhap via EPA]

As the British ambassador noted, the discrimination against foreigners over COVID-19 vaccinations is something that affects not only business and investors, but people who are actively contributing to Korean society.

But any change in the law is likely to be too late for Betany and other foreigners who are residents in South Korea and were vaccinated elsewhere.

For now, they must follow the rules for those who have had no jab at all – submitting a negative PCR test carried out within the previous 48 hours in order to get into a gym, club or other large venue.

Some are getting vaccinated all over again, but Betany is simply hoping for the best and that the government will change its policies.

“I guess we will have to wait,” she says with a laugh.