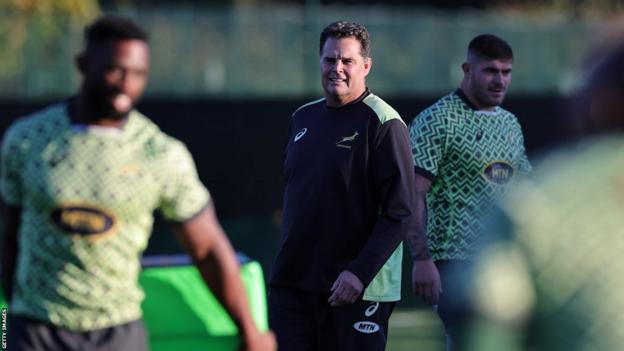 Erasmus has been a fixture at Springboks training this week, but is unable to take part in the matchday set-up

"Not sure I would know what to say to any other team before a World Cup final."

With those words, Rassie Erasmus first appeared on Twitter back in February 2020.

His debut post was accompanied by footage of the rousing pre-game pep talk he had given in the depths of the Yokohama International Stadium three months before.

Duly inspired, the Springboks, after pedestrian wins over Japan and Wales in previous rounds, swept past England to win the Rugby World Cup final 32-12.

As the teams prepare to meet again on Saturday, three years and 190-odd posts later, Erasmus still sets the mood.

South Africa's director of rugby and content creator-in-chief won't be at Twickenham. Instead he is serving out the second week of a fortnight's ban from the Springbok matchday set-up.

His suspension was imposed for his less edifying, but now more regular, social media output - a string of tweets highlighting refereeing calls against his team.

They were, Erasmus claims, intended to open up discussion and understand the game better.

There are already extensive backchannels for dialogue with referees. As Erasmus well knows.

For instance: Last July, after South Africa had lost the first of their three Tests against the British and Irish Lions in Cape Town, Australian referee Nic Berry received a video detailing a series of decisions the Springbok staff were unhappy with. Within half an hour, Berry emailed Erasmus.

"I received your clips, thank you," Berry wrote, offering to meet with Erasmus to review his own performance. Berry also replied with thoughts on every one of the 36 calls in question.

The video leaked online shortly after, spreading rancour through the British and Irish Lions tour. An independent disciplinary committee rejected Erasmus' claim he was not responsible for publicly releasing it.

So, it feels that Erasmus' public show this autumn must have a particular, private audience in mind, the same that took in his speech in Yokohama: the Springboks themselves.

And it seems to be working.

Test rugby's top cats carry themselves like underdogs. Any swagger they might have picked up for their World Cup win has been chased out of town by a new siege mentality. That rumble? It is a returning hunger to prove the world wrong.

Head coach Jacques Nienaber appeared in front of the media earlier this week. He said that the full truth over Erasmus' ban wasn't yet public. He claimed there is a false narrative being spun about his team.

Mind games? Well, it may just be the motivation South Africa need.

The Springboks are not the team they were in 2019. And neither are England.

Smarter, slicker operators won't be bullied out of games any more. Brawn and brain need to be deployed in equal measure.

The rankings have South Africa and England fourth and fifth in the world respectively. Neither have broken a 50% win rate for the autumn so far.

Both are searching for solutions and additions to their game in time for France 2023.

Nienaber bristled at the stereotype of his team, who scored 20 tries in six Rugby Championship games earlier this year, as collision connoisseurs and little else.

In Kurt-Lee Arendse and Canan Moodie, they have electric pace out wide to compete with stalwarts Cheslin Kolbe and Makazole Mapimpi. 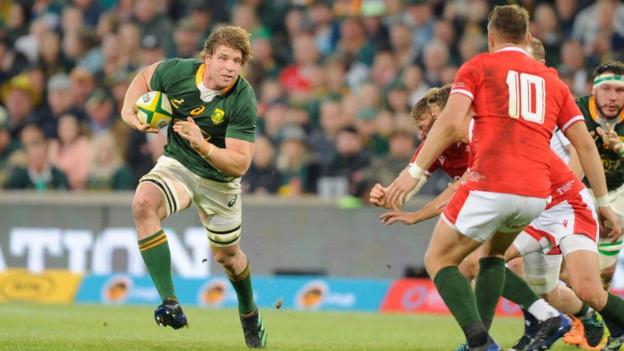 Evan Roos made his Springbok debut against Wales earlier this year

Evan Roos, who wins his third cap at Twickenham, is a number eight of startling speed. Damian Williamse, who starts at 10, has a scintillating running game that was never part of 2019 fly-half Handre Pollard's armoury.

England's Eddie Jones, himself more than happy to take the heat of the spotlight in the build-up to a big game, has had an unusually minor role in the days leading up to this one.

He joked that Erasmus might emulate football manager Jose Mourinho by popping out of a Twickenham laundry basket to rally his team. He said his England wanted to "light up" Twickenham with the spirit that infused their comeback against the All Blacks.

But he hasn't made the hay you might expect from the controversy surrounding the Boks.

Instead Jones has concentrated on adding to the toolkit of a team whose first instinct has been to reach for the sledgehammer.

He has brought back Tommy Freeman, who alongside Freddie Steward and Jonny May, makes up a pacey back three, who are equally comfortable under the high ball. 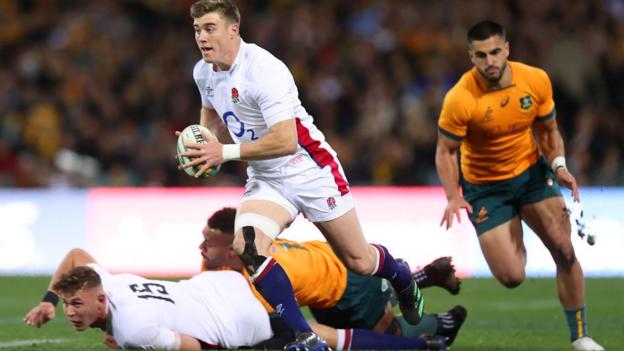 This fixture, which, incidentally, at the same point in the last World Cup cycle, prompted Erasmus to stage a 'training' session teaching his team how to hit as high as Owen Farrell, will be a balancing act.

The ideal is you achieve both. The danger is you manage neither, fall between two stools and end the autumn on a deflating bum note.

In that case, for either team, the debrief would be brutal. With or without Erasmus' tweets.