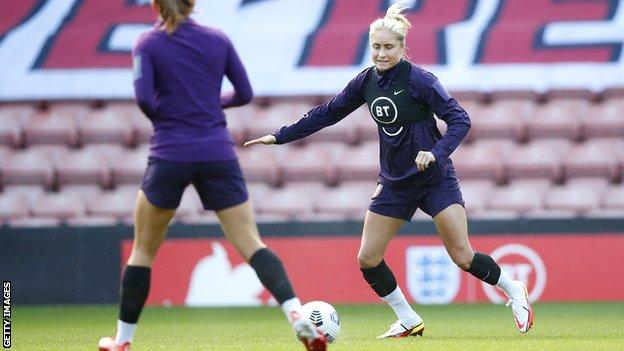 Steph Houghton has earned 121 England caps in her career

England captain Steph Houghton is out of Friday's World Cup qualifier against North Macedonia because of an ankle injury, with Arsenal's Leah Williamson leading the side for the first time.

The Manchester City defender, 33, will return to her club with England also due to face Luxembourg on Tuesday.

Houghton sustained the injury during the team's final training session before the game in Southampton.

Friday's match is Wiegman's first since taking over from interim manager Hege Riise on 1 September and she may also be without Chelsea forward Fran Kirby, who took part in reduced training sessions this week.

England come into qualifying for the 2023 World Cup having lost their last two friendlies against Canada and France in April.