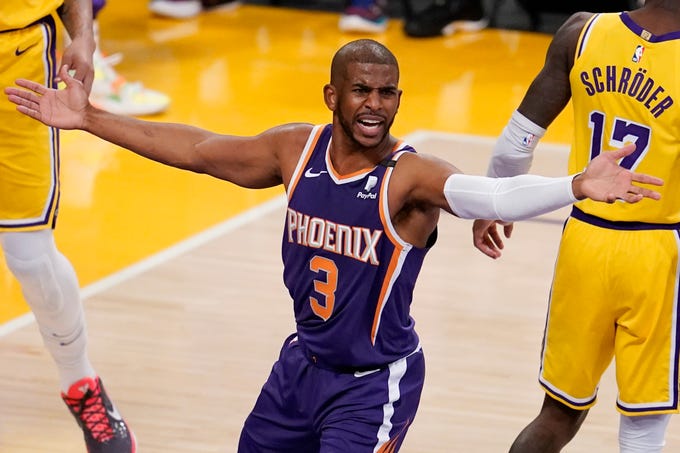 Chris Paul has 34 assists to just three turnovers in the series against the Nuggets. Dustin Bradford, Getty Images

Second round: Suns guard Chris Paul directs the offense during the second half of Game 2 against the Nuggets. Mark J. Rebilas, USA TODAY Sports

Phoenix Suns point guard Chris Paul is greeted by fans at Phoenix Sky Harbor International Airport after sweeping the Denver Nuggets in the second round of the 2021 NBA Playoffs on June 13, 2021. Joseph Cooke/The Republic 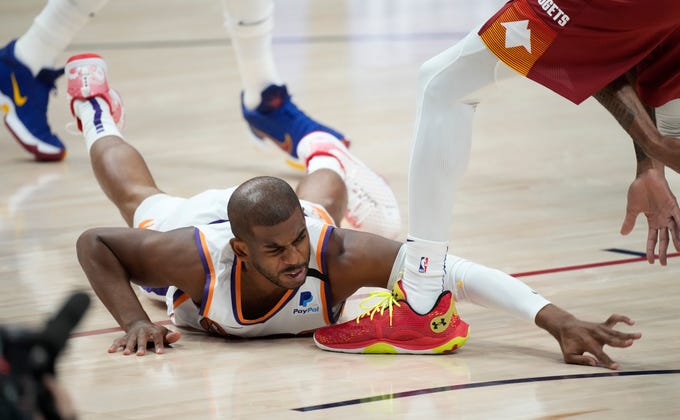 Phoenix Suns guard Chris Paul falls on the floor while pursuing a loose ball in the first half of Game 4 of an NBA second-round playoff series agtainst the Denver Nuggets Sunday, June 13, 2021, in Denver. (AP Photo/David Zalubowski) The Associated Press 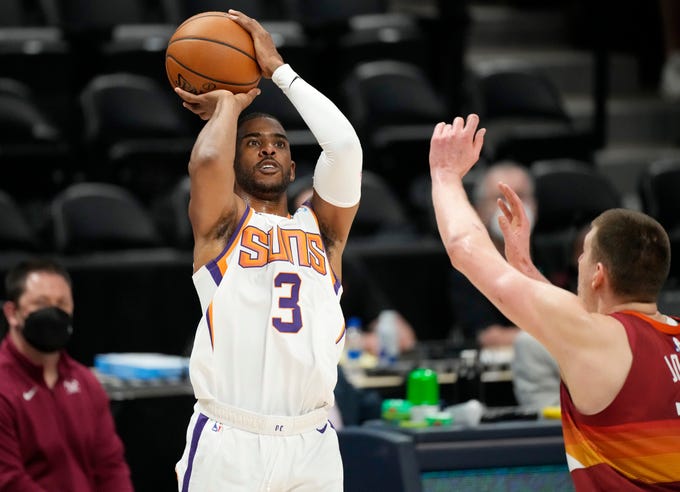 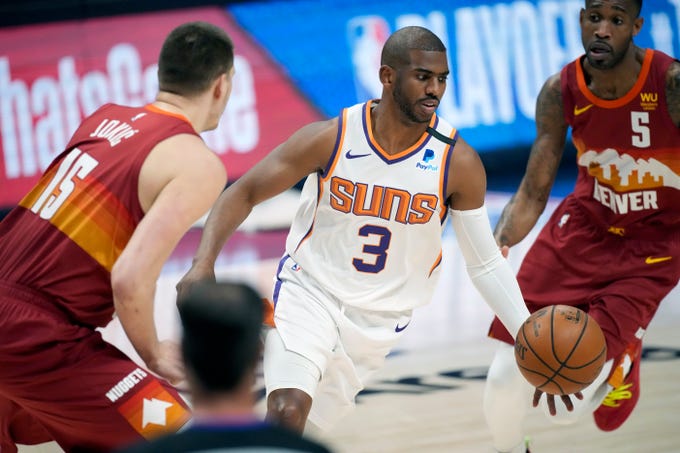 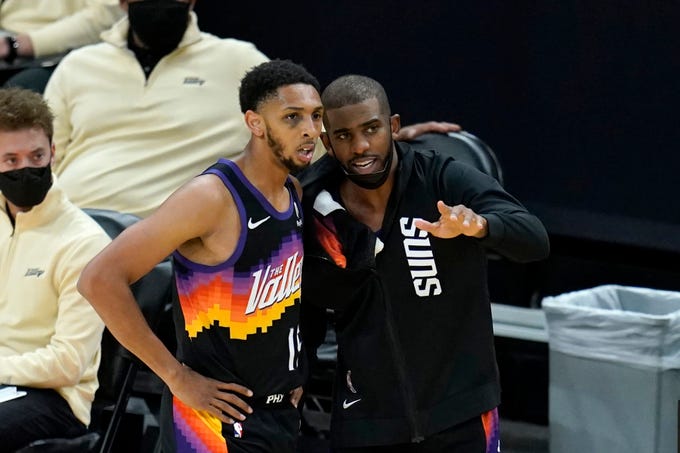 Second round: The Phoenix Suns' Chris Paul drives to the basket against the Denver Nuggets in the second half of Game 1 at Phoenix Suns Arena on June 7. The Suns won the game, 122-105. Mark J. Rebilas, USA TODAY Sports

DENVER, CO - JUNE 11: Chris Paul #3 of the Phoenix Suns looks on in the first half of Game Three of the Western Conference second-round playoff series at Ball Arena on June 11, 2021 in Denver, Colorado. NOTE TO USER: User expressly acknowledges and agrees that, by downloading and or using this photograph, User is consenting to the terms and conditions of the Getty Images License Agreement. (Photo by Dustin Bradford/Getty Images) Dustin Bradford, Getty Images 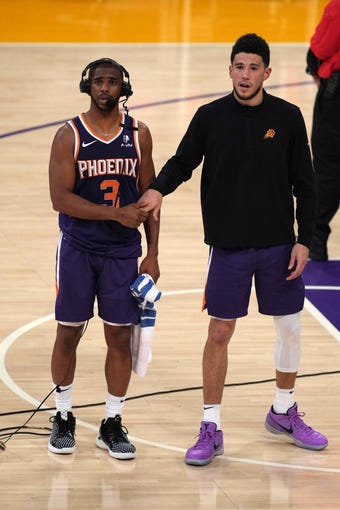 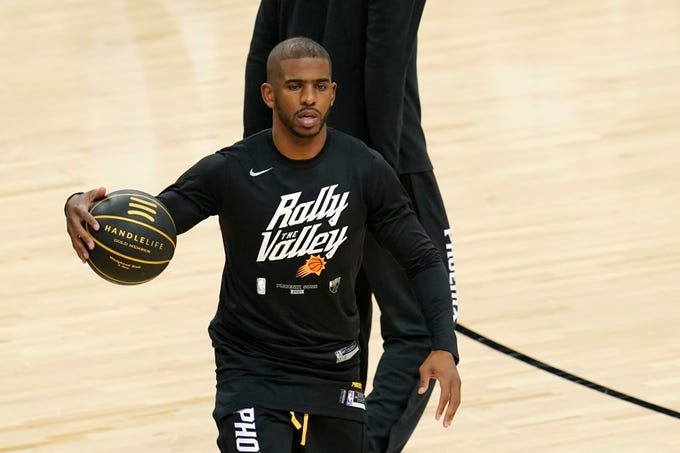 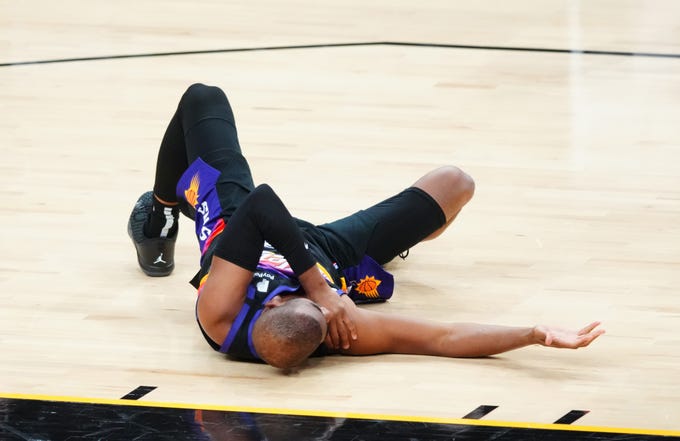 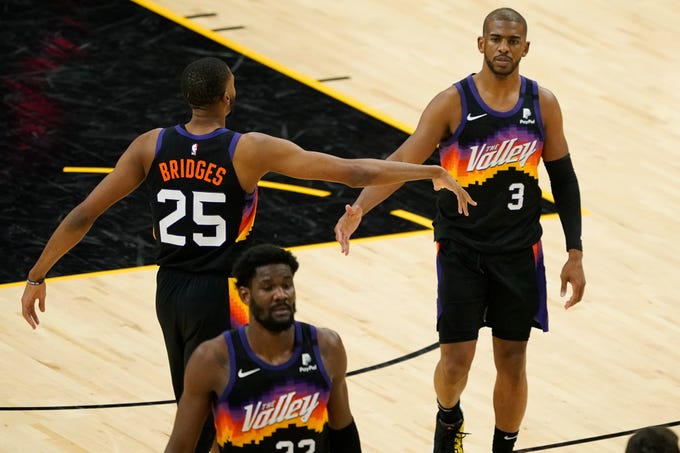 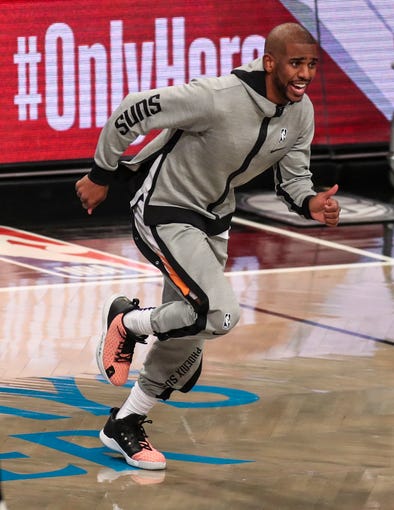 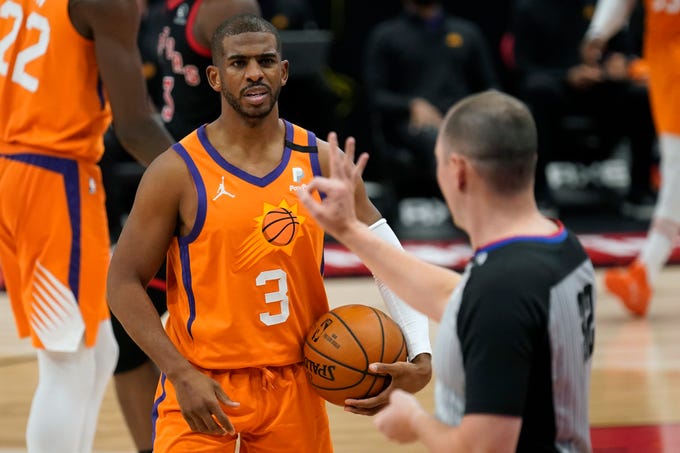 Phoenix Suns All-Star point guard Chris Paul is featured in the documentary , 'The Day Sports Stood Still" about how March 11 changed everything amid COVID-19 pandemic. Paul is an executive producer of the documentary set to debut March 24 on HBO. HBO 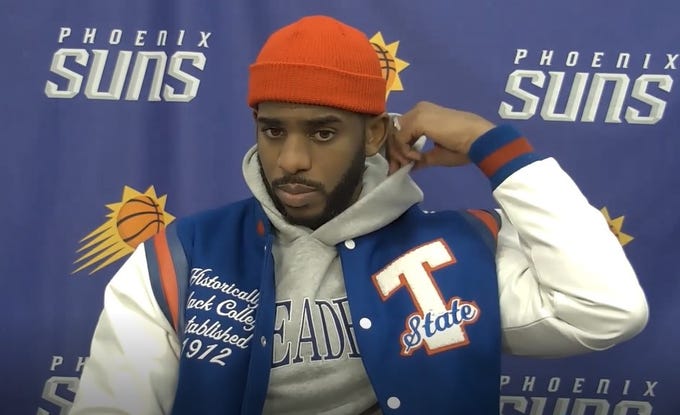 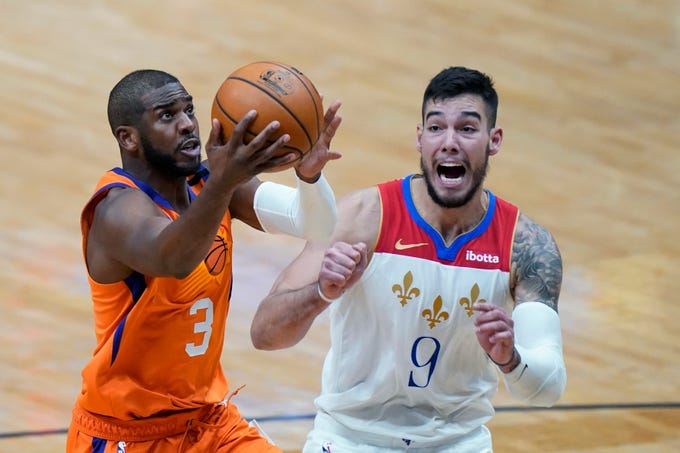 Phoenix Suns guard Chris Paul (3) argues a call during the first half in Game 3 of an NBA basketball first-round playoff series against the Los Angeles Lakers Thursday, May 27, 2021, in Los Angeles. (AP Photo/Marcio Jose Sanchez)

With first-team All-NBA selection Kawhi Leonard also ruled out with a right knee sprain for the Clippers, the 2021 Western Conference finals will begin Sunday with two of the most important players not the floor.

Phoenix Suns All-Star point guard Chris Paul is ruled out for Sunday's Game 1 of the Western Conference finals at Phoenix Suns Arena as he remains under the NBA's health and safety protocols.

This ruling was posted on the NBA's final injury report for Saturday after Suns coach Monty Williams said earlier in the day the situation is "day-to-day" for the 16-year veteran going into this best-of-7 series.

"Because of the climate that we live, things change from day-to-day," Williams said. "I try to take it one day at a time. I certainly understand the line of questions, but for me, based on the information and based on the history of this particular protocol, everything is day-to-day. So that's how I have to approach it."

However, forward Jae Crowder talked as if the Suns were planning to start this series without Paul, who in his first season in Phoenix has led the Suns to the conference finals, a place this franchise hasn't been since 2010 when it last made the postseason.

"We have enough in our locker room to get the job done," Suns forward Jae Crowder said. "We're just looking forward to tomorrow's game, Game 1. That's our mentality. Just the mindset that not one guy is going to fill the void of Chris. Obviously we know that, but it's a collective effort. That's our main focus right now and that's how we're approaching it."

More: 'Next man up': Phoenix Suns preparing for conference finals without Chris Paul, who remains under health and safety protocols

Depending on how Paul's going through the protocols, the second-seeded Suns could be without the 10-time All-NBA selection for Tuesday's Game 2 in Phoenix.

"Control what we can control," Suns All-Star Devin Booker said. "I don't know the timetable (on the protocols). We just go with what we hear day-to-day, but it's next man up."

The fourth-seeded Clippers will be without first-team All-NBA selection Kawhi Leonard, who will miss his third straight game with a right knee sprain he suffered in Game 4 against the top-seeded Utah Jazz.

Cameron Payne will likely start for Paul as he's the backup point guard, but Williams has options like E'Twaun Moore and Jevon Carter to help fill the Paul absence for Game 1.

"Cam has done a great job of running the offense, picking up a few pointers from Chris, one of the all-time great points guards of our league, and just being aggressive," Crowder said. "I think it's a tough situation for him to get put in because when he comes off the bench, he's a totally different player, but we want him to play the same way."

Crowder added Payne is "very prepared for this moment," as Payne has played with the starters as part of the rotation of Paul sitting at the midway point of the first quarter.

Booker could also see action at the one, but he's confident in Payne as well.

"He's not scared of the moment," Booker said. "Usually, if somebody is put in that situation, they come in little hesitant, but that's not how he plays at all."

The Suns announced Tuesday that Paul was placed under the league's health and safety protocols, two days after they swept the Denver Nuggets in the conference semifinal as the 10-time All-NBA selection scored 37 points in the closeout Game 4 victory Sunday at Ball Arena.

On Wednesday, the NBA and National Basketball Players Association released their weekly joint report on COVID-19 testing, saying  "of the 164 players tested for COVID-19 since June 9, one new player has returned a confirmed positive test."

Phoenix is the only team to report having a player under health and safety protocols since June 9. Paul is president of the NBPA.

The Clippers, one of Paul's former teams, reached the conference finals for the first time ever after Friday's 131-119 Game 6 home win over the top-seeded Utah Jazz.

The Jazz hadn't lost more than two games in a row going into the playoffs, but have their season end on a four-game skid.

Had Utah won Friday to force a Game 7 at home Sunday, the conference finals would've began Tuesday in either Phoenix or Salt Lake City.

"It hasn't fully sunk in for me yet," said Jazz All-Star Donovan Mitchell after Game 6. "I'm still in shock."

Rallying from 25 points down early in the third quarter, the Clippers thoroughly outscored the Jazz, 81-47, in the second half of the closeout victory.

"They're a good team and they've shown they can overcome deficits in the playoffs," said Williams as the Clippers became the first team in NBA history to overcome multiple 2-0 series deficits in the same postseason.

The Clippers dropped their first two games at home against Dallas before winning the series in seven.

"Watching the game last night, you saw the Clippers impose their will defensively," Williams continued as the Clippers took two out of three games from the Suns in the regular season.

Phoenix went 3-0 against the Jazz in the regular season.

"Then offensively, they just kept attacking the paint," Williams added about the Clippers. "They got a ton of open 3s in the corner."

The Clippers started small Game 6 with Nicolas Batum at the five, leaving Rudy Gobert, the three-time defending NBA defensive player of the year, looking uncomfortable guarding the 3 as Mann got repeated open looks in the corner.

They may use the same strategy against the Suns, but Phoenix's five-man, Deandre Ayton, has shown the ability to move his feet and stay in front of smaller, quicker perimeter players.

"He does a pretty good job of forcing tough shots," Williams said about Ayton. "The one thing that we can't do is overreact when a guy makes a tough shot over his length, but when I think about it and I watch film, when you're in that situation with a bigger guy on a smaller guy, the guys around that take particular environment have to be in protection mode so that the guy with the ball doesn't see alleys to the basket and there's straight-line drives."

Crowder believes Ayton can punish the Clippers on the other end if they go small.

"I think we can win the rebounding battle against these guys," Crowder said. "I feel like with him being on the court, it's not one guy out there when they play small that can keep him off the glass. We've just got to do a good job of imposing that all night."

A common theme throughout the regular-season matchups between the Suns and Clippers was the chippy play between two Pacific Division squads starting in the first battle Jan. 3 Los Angeles won, 112-107, in Phoenix.

Paul George and Devin Booker got into a verbal altercation during the fourth quarter of Phoenix's 112-107 loss Sunday to the Los Angeles Clippers. Arizona Republic

Down by as many as 31 points, Phoenix surged back to within a point early in the fourth quarter before Paul George and Devin Booker exchanged heated words after George reacted to Payne falling on him in trying to block his shot.

After the game, Booker said it was "nothing," but admits he plays with an edge.

"That's the only way I know how to play, honestly," Booker said. "That's how I've played for a very long time. Since I've been a kid, playing with the older kids, I just wanted to be on the court and knowing that was my only way on the court when I was four or five years younger than my opponents growing up."

Playing with his dad and his dad's friends further fueled that competitive edge that includes playing physical and talking trash.

With a spot in the NBA finals on the line, things could get even edgier starting Sunday. So Williams want Booker to keep all that in mind yet stay true to himself.

"I try not to sway him at all when it comes to that, but I also want him to understand what they're trying to do," Williams said. "They're typically trying to get him off of his game and because he's so competitive, he just doesn't back down from anybody and that's what I like about him. That I love about him."

Paul is just as competitive as Booker, if not more, but the Suns will start this series without him in what would be the latest postseason setback for the 11-time All-Star.

He played in all but two of the NBA-shortened 72 games in the regular season, but injured his right shoulder in Game 1 of the first round series against the defending NBA champion Los Angeles Lakers.

After struggling with the injury through the first three games as Phoenix fell behind 2-1, Paul played much better in leading the Suns to a Game 4 win in Los Angeles to even the series.

Paul then had a shoulder scare in Game 5 after going down following a boxout from Wesley Matthews, but continued to progress to the point he dominated the Nuggets series.

Now the future Hall of Famer is ruled out for Game 1 of the conference finals. 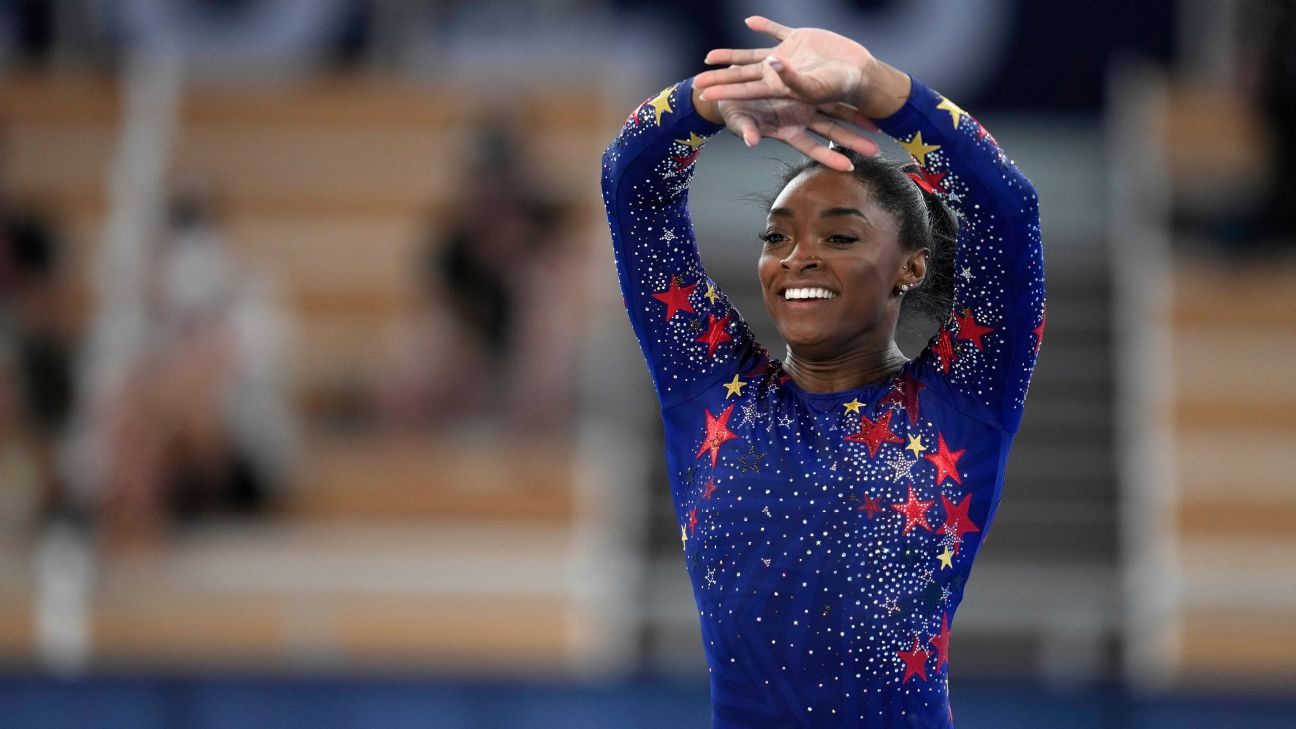 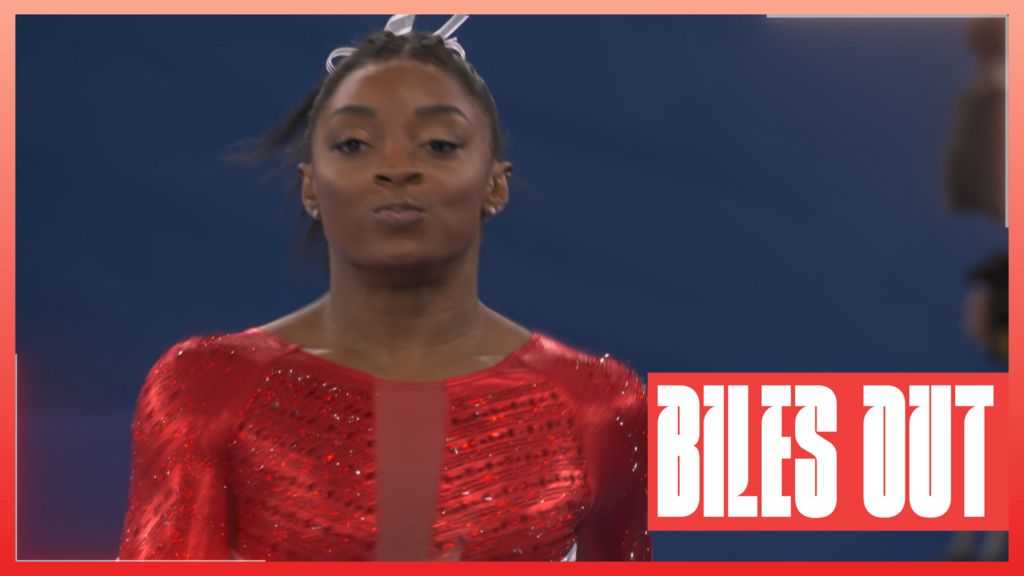 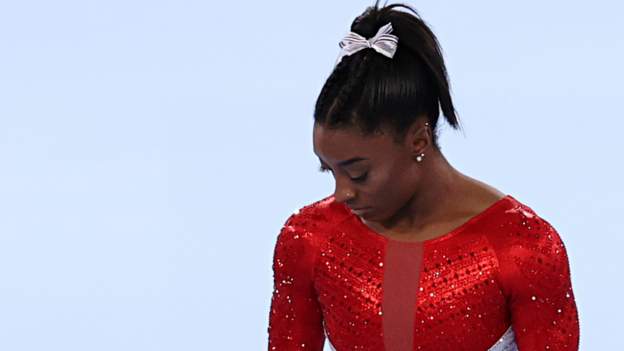