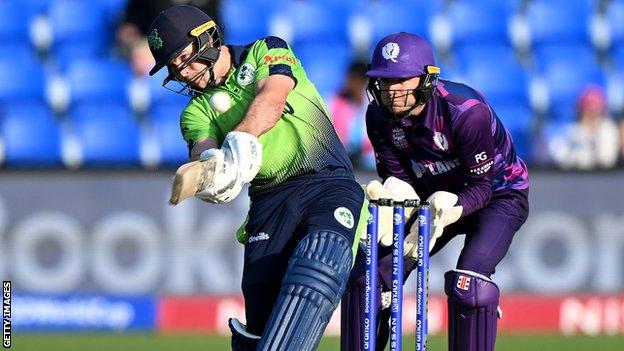 Curtis Campher blasted 72 not out from only 32 balls

Ireland kept alive their hopes of progressing at the Men's T20 World Cup with a stunning comeback to beat Scotland by six wickets in Hobart.

But Curtis Campher and George Dockrell shared a blistering stand of 119 to get Ireland home with an over to spare.

The result means both teams will have a chance of reaching the main draw in Friday's final first-round games.

Regardless of the result between Zimbabwe and West Indies later on Wednesday, Scotland and Ireland will have a shot at progressing if they can beat Zimbabwe and the Windies respectively.

Ireland were second-best for much of the day in Hobart and were staring at a second successive early exit from the World Cup after a disappointing campaign a year ago.

Campher was underused in an indifferent Irish bowling display - he took 2-9 from two overs with his clever medium-pace - but went on to make a telling contribution with the bat.

After Michael Leask had Harry Tector caught at deep mid-wicket, Ireland looked floored, only for Campher to combine with Dockrell in a whirlwind counter-attack.

Scoring at more than 12 an over, the fifth-wicket pair took the game away from Scotland in the blink of an eye.

Campher launched two sixes over deep mid-wicket, Dockrell one of his own, and they hared between the wickets to run the Scots ragged.

The 16th over, bowled by experienced seamer Josh Davey, was taken for 17 runs, and Ireland followed that by getting 11 off the next from wily spinner Mark Watt, becoming favourites for the first time.

Campher's fifty came from only 25 balls and when he hit back-to-back fours off Davey in the 19th over, the game was up.

He ended unbeaten on 72 from 32 balls, Dockrell on 39 from 27, as Ireland completed their highest successful chase at a T20 World Cup.