The first private astronaut mission is headed for ISS next year

Opportunities for private citizens to go to space got another boost after NASA reached an agreement this week to launch its first all-private astronaut mission to the International Space Station (ISS).

The agency is partnering with space startup Axiom Space – based in Houston, Texas in the United States – to send a crew of four to the space station early next year. If all goes according to plan, they will become the first private astronauts to stay on the orbital outpost.

That flight, called Axiom Mission-1 (or Ax-1) will launch as early as January 2022 aboard a SpaceX Crew Dragon capsule. The four-person crew including Larry Connor, Mark Pathy, and Eytan Stibbe will be led by retired NASA astronaut Michael López-Alegría. 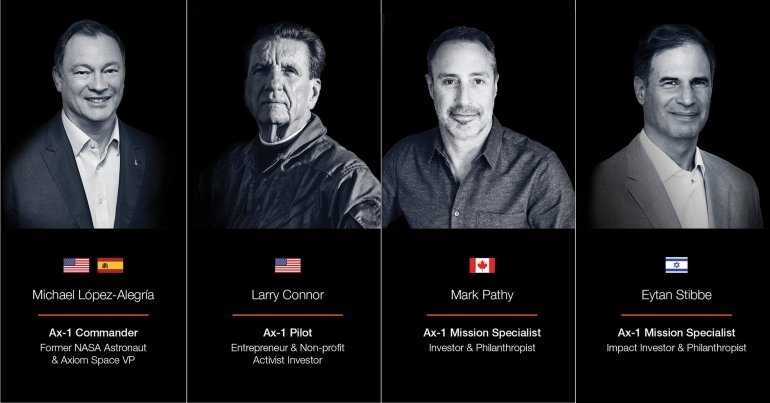 As part of a deal signed by NASA, the space agency will pay Axiom $1.69m for assorted services including transporting payloads to and from the ISS, and more. It will also allow López-Alegría and his three-person crew to stay on the ISS for eight days.

NASA won’t be the only one footing the bill: each of the three passengers will have to shell out approximately $55m for their flight.

The crew will board a SpaceX Crew Dragon capsule, and launch from NASA’s Kennedy Space Center in Florida. After their arrival, they will spend a little over a week on the space station, performing a variety of activities, including research investigations.

Pathy, who is a Canadian investor, will be collaborating with the Montreal Children’s Hospital and the Canadian Space Agency. Connor, an investor, will work with the Mayo Clinic and Cleveland Clinic while Stibbe, who is a former Israeli fighter pilot, will conduct scientific experiments coordinated by the Israel Space Agency at the Ministry of Science and Technology.

“Larry and Mark are very serious individuals who are dedicated to being the best they can be in the mould of a NASA astronaut and they’re not interested in being tourists,” López-Alegría told Al Jazeera. “They want to do their part to improve humankind.” 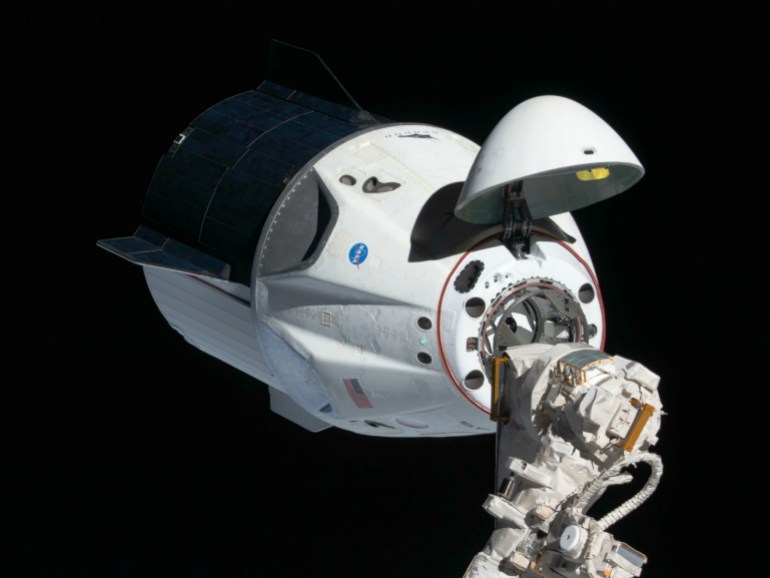 The Ax-1 crew will ride to orbit inside a SpaceX Crew Dragon spacecraft [Courtesy: SpaceX]

Rise of the private astronaut

Private citizens (or space tourists) have visited the space station before, having flown to the ISS in a Russian Soyuz with the help of a company called Space Ventures.

The Virginia-based company has flown tourists such as entrepreneur and space investor Anousheh Ansari and Cirque du Soleil co-founder Guy Laliberté. Singer Sarah Brightman was scheduled to fly to the space station aboard a Russian Soyuz but ended up backing out in 2015 for undisclosed reasons.

Travelling to space is expensive, but one day NASA and other companies like SpaceX and Blue Origin hope that eventually, costs will come down, enabling more people to take advantage of the burgeoning flight opportunities.

“This truly is a renaissance in US human spaceflight, I think that’s the perfect word for what we’re experiencing,” Phil McAlister, director of commercial spaceflight development at NASA, told Al Jazeera. “History can feel incremental when you’re in it, but I really feel like we are in it this year. This is a real inflection point, I think, with human spaceflight.”

To help spur this along, NASA is offering plans for private astronaut missions (or PAMs), allowing two flights per year to visit the space station, and use of the station’s facilities. That’s because the agency still has to transport its own astronauts and accommodate cargo vessels, as there are only so many docking ports. 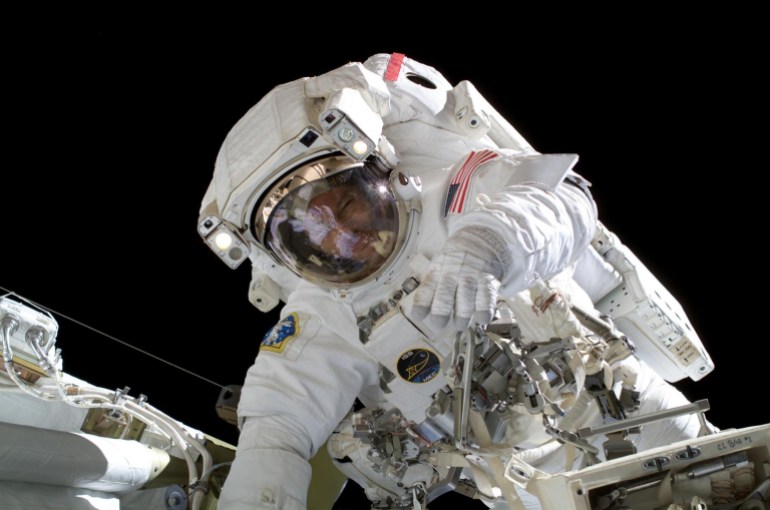 Michael López-Alegría, a retired NASA astronaut who helped build the space station, will be the commander of Axiom’s first private astronaut mission [Courtesy: NASA]Right now, NASA says that the demand for these types of missions exceeds the number of flights the agency can accommodate.

“The dream is really to allow everyone access to space. And this is a pretty exciting starting point here,” ISS deputy manager Dana Weigel told Al Jazeera. “Who knows what innovations and creative ideas will arise now that we’re able to finally share our mission with industry and private citizens who want to visit the station?”

Weigel said that previous space tourists had limited access to the US side of the space station, but that will change with this mission. The Ax-1 crew will be living and working in the US segment of the station, working on various projects.

Previous missions were more focused on tourism, but Weigel says that these types of flights will be different.

“This isn’t just about tourism. There are many private professionals who are passionate about the betterment of mankind and who would like to do research and STEM [science, technology, engineering and mathematics] activities onboard stations,” Weigel said, noting this includes researchers who want to fly with their own payloads.

But just because they can foot the bill, that doesn’t automatically grant them the green light from NASA. The crew will need to undergo extensive training for both the Dragon spacecraft and the space station. They will also need to pass NASA’s medical exam prior to being officially approved by the agency. López-Alegría says that the crew will be training in Houston as well as at SpaceX’s facilities in Hawthorne, California. They will learn everything they need to do from the same people who trained him as well as NASA’s entire astronaut corps, says López-Alegría.

Crew training will be staggered due to different responsibilities. Since he has the role of commander, López-Alegría will begin training in August. Connor, the mission’s pilot, will start in September, and the rest of the crew will get ready in October.

Around two-thirds of the crew’s training time will be dedicated to ISS-specific instruction and the rest to training with SpaceX, which includes tasks like learning how Crew Dragon docks to the ISS, how to use the toilet on both the spaceship and the station, and how to sleep in space.

Before intensive training with NASA begins, the four crew members will go on a “camping trip” in the Alaskan foothills in July for survival training and to bond as a crew, López-Alegría said. A task that the crew of another private citizen flight, called Inspiration4, just completed this past week was camping out at Mount Rainier in Washington State.

Other activities will involve centrifuge training to simulate a launch, as well as a parabolic plane flight to imitate zero gravity.

“From there, the pace will pick up and we’ll all be immersed, essentially full time, in ISS systems and Crew Dragon training starting in the fall,” López-Alegría said.

This is a real inflection point, I think, with human spaceflight.

Axiom ideally wants to fly private astronauts to the ISS twice a year. But it may face some stiff competition as it will have to vie for spots with other companies and government missions.

The ISS is a technical marvel that’s been supporting humans in space for 20 years now. There, agencies all over the world are able to perform cutting-edge science that isn’t possible on Earth due to gravity.

But the space station is showing its age and won’t last forever. Eventually, NASA plans to bid it farewell, and steer it into the Pacific Ocean, sometime in the 2030s. The agency and Congress both hope to have a commercial alternative by then.

Axiom has its own plans: to build a free-floating station called AxStation. The outpost would start as a module attached to the ISS, then eventually detach and serve as the basis for the company’s own research facility in space.

NASA has been teaming up with commercial companies recently to help foster a commercial economy in Low Earth Orbit. Relying on private industry partners enables the agency to do more in space as it rents services from its partners.

Consider NASA’s commercial crew programme. It’s partnered up with SpaceX and Boeing to use those companies as a means to transport astronauts to and from the space station. To date, SpaceX has launched three sets of astronauts, with Boeing’s Starliner expected to complete its second orbital test flight later this summer ahead of its first crewed mission.

The Ax-1 mission would be a big step towards NASA’s goal of creating a commercial economy in Low Earth Orbit. That includes companies flying people to and from space, conducting tourism and science, and even building their own space stations.

The agency hasn’t announced any other flights with other companies just yet, but says there is a lot of interest. If it were up to Axiom, however, the company would fly as many missions as it could.

Following that first flight next year, up next for Axiom will be the launch of its commercial module, which aims to dock with the space station in 2024.