The It List is Yahoo's weekly look at the best in pop culture, including movies, music, TV, streaming, games, books, podcasts and more. Here are our picks for Dec. 6-12, including the best deals we could find for each. (Yahoo Entertainment may receive a share from purchases made via links on this page.)

WATCH IT: Jennifer Aniston and Kevin Hart act out classic ‘80s sitcoms in front of a live studio audience

You take the good, you take the bad… actually, the latest of edition of ABC’s Live in Front of a Studio Audience is nothing but great. The Jimmy Kimmel-created special returns with back-to-back all-star performances of two beloved ‘80s sitcoms from the original teleplays. First, Jennifer Aniston, Kathryn Hahn, Gabrielle Union and Allison Tolman visit Eastland Academy for a Very Special Facts of Life Episode that will feature appearances by some Very Special (and top secret) Guest Stars. Then Kevin Hart and Damon Wayans play the Jackson brothers opposite John Lithgow’s Mr. Drummond in an all-new version of a classic Diff’rent Strokes episode. Who said repeats were boring? — Ethan Alter

Live in Front of a Studio Audience: The Facts of Life and Diff’rent Strokes airs Tuesday, Dec. 7 at 8 p.m. on ABC.

WATCH IT: The Forever Prisoner forces us to ask ourselves moral questions about the real price of freedom

Acclaimed director Alex Gibney (The Crime of the Century; Crazy, Not Insane) is taking viewers behind scenes of America’s controversial torture program. In The Forever Prisoner, the story of Abu Zubaydah, the first high-value detainee subjected to the CIA’s program of Enhanced Interrogation Techniques (EITs), later identified as torture to those outside the agency, comes to life. Through previously classified documents and a string of whistleblowers, the film highlights the realities of what takes place at Guantanamo Bay, a U.S. military prison on the coast of Cuba that is still active today (though President Joe Biden has declared his intention to shut down the facility before he leaves his office). Zubaydah was never charged with a crime and has remained at the facility since 2001 — six months after the 9/11 terrorist attacks. Based on four years of intensive reporting, as well as interviews with key players, the documentary raises several moral questions about who we are as a nation and how far is too far when it comes defending our principles. — David Artavia

The Forever Prisoner premieres Monday, Dec. 6 at 10 p.m. on HBO.

Success! You have subscribed to Yahoo newsletter.

WATCH IT: Visions of boy bands synchronize-dance in our heads

Attention, all candy girls and telephone men! ABC’s got the right stuff this holiday season with A Very Boy Band Holiday. It’ll be tearin’ up your heart and you’ll drive yourself crazy if you miss out, so make sure to tune in, as New Edition’s Bobby Brown and Michael Bivins; *NSYNC’s Lance Bass, Joey Fatone and Chris Kirkpatrick; Boyz II Men’s Shawn Stockman and Wanya Morris; New Kids on the Block’s Joey McIntyre; O-Town’s Erik-Michael Estrada; and all four 98 Degrees members (yes, that’s right, both Lacheys!) bring good tidings of cheer. Along with a special performance of “This One’s for the Children” by McIntyre and his son Griffin, expect all of the heartthrobs’ own holiday hits from their respective classic Christmas albums. Get ready to party like it’s 1998! — Lyndsey Parker

A Very Boy Band Holiday premieres Monday, Dec. 6 at 8 p.m. on ABC, and streams the following day on Hulu.

We’re now a couple days removed from Native American Heritage Month, but Native Americans — and their historical and cultural contributions — should be honored in this country every month of the year. This month brings the soulfully crafted Love and Fury, a documentary directed by Sterling Harjo (showrunner of FX’s sublime hit Reservation Dogs) and co-signed by Ava DuVernay and her Array Releasing banner that follows various indigenous artists and musicians (including a jazz vocalist, comedian, author and rapper) around the U.S. and abroad as it explores cultural identity and the notion of what it means to be a Native creator in the 21st century. It’s a rewarding viewing experience, and also one that also provides fertile ground to discover some truly enticing artists. — Kevin Polowy

Love and Fury is now streaming on Netflix.

America's favorite quiz show is launching its first-ever tournament where professors from colleges and universities across the country will go head-to-head to test their knowledge of well... a little bit of everything. Mayim Bialik is back behind the podium hosting as 15 educators square off for the chance at a $100,000 grand prize and a spot in the Tournament of Champions. "It was an unbelievable thrill to see so many brilliant professors from all kinds of schools and backgrounds come together on the Jeopardy! stage," Bialik said in a statement. "There was a sense of kinship and academic camaraderie among the group, along with a healthy dose of competitiveness. That energy made this inaugural Professors Tournament incredibly special." And while loyal viewers might have to wait a little bit longer to see what reigning champ Amy Schneider does next, the tournament is sure to bring the highs, lows and oh nos fans know and love. — Alexis Shaw

Archie Andrews may be 80 years old, but Riverdale’s most popular teenager doesn’t look a day over 18. The classic comic book character made his debut in the pages of Pep Comics in December 1941, and soon became the face of his own comic line, not to mention albums, TV cartoons and an ongoing CW series. To celebrate Archie’s 80th year, Archie Comics has published a pair of digest-sized anthologies that collect stories from his entire eight-decade publishing history. 80 Years, 80 Stories boasts 700 pages of Riverdale antics, while the seasonally-appropriate 80 Years of Christmas presents readers with a wealth of Christmas yarns. Sugar, sugar not included. — E.A.

The Best of Archie Comics: 80 Years, 80 Stories and Archie: 80 Years of Christmas are available at most major booksellers, including Amazon.

Leading the new wave of boy bands is South Korea’s Monsta X, who return this week with their second English-language album, The Dreaming, as well as a limited-run concert film of the same title. The movie will tide fans over until these monsters of K-pop can make it back to the States for a massive tour in 2022. — L.P.

The Dreaming album by Monsta X is available Friday, Dec. 10 to download/stream on Apple Music; the Monsta X: The Dreaming film plays only in cinemas Dec. 9 and 11. 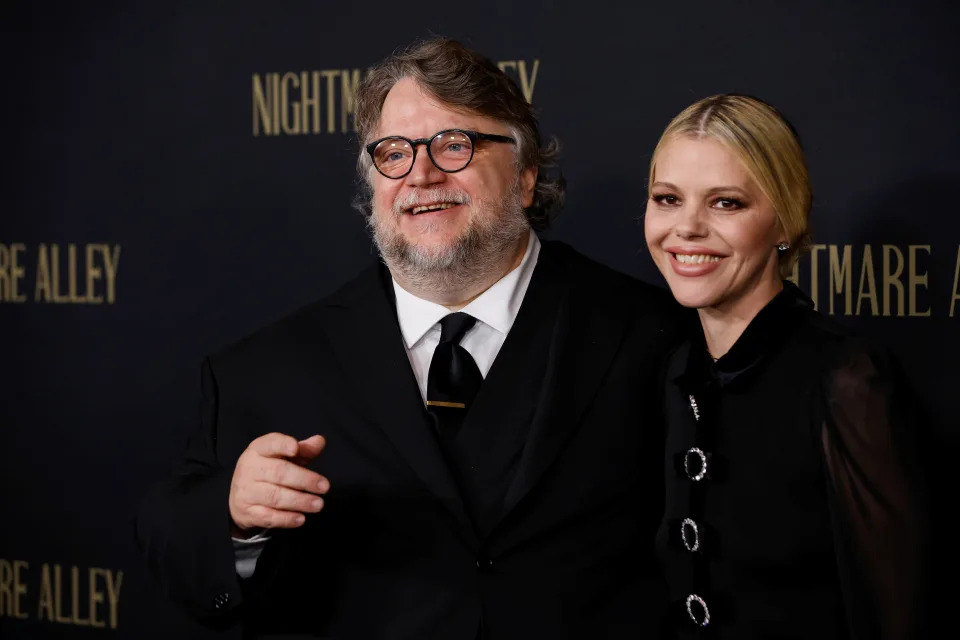 Monster maniac Guillermo del Toro leaves the creatures behind for his latest feature, Nightmare Alley, an all-new version of the 1946 book and the 1947 film noir. Ahead of the movie’s Dec. 17 theatrical premiere, the Oscar-winning Shape of Water director and his co-writer (and wife) Kim Morgan take over TCM as guest programmers for a three-movie marathon that celebrates the noir genre. Alongside TCM host, Dave Karger, Del Toro and Morgan will introduce and discuss 1949’s Too Late for Tears, 1950’s Where the Sidewalk Ends and, of course, the original Nightmare Alley. “Our film choices were made to illuminate lesser known examples of noir,” Del Toro tells Yahoo Entertainment via e-mail. “We wanted to emphasize the moral choices that come with noir — the choices that the characters make doom them to a tragic destiny they could have avoided.” — E.A.

STREAM IT: Kyle Mooney sends up your Saturday morning favorites on Saturday Morning All Star Hits!

Saturday morning cartoons died in the ‘90s alongside Crystal Pepsi and the Power Glove, but Saturday Night Live player Kyle Mooney is here to bring them out of the TV graveyard. Mooney’s eight-episode Netflix series, Saturday Morning All Star Hits!, is both a loving tribute to — and bizarre parody of — the cheaply-animated 20-minute toy commercials that raised an entire generation. Long-forgotten shows like Denver the Last Dinosaur and ProStars become Randy and Pro Bros, and Mooney also appears in live-action segments that send up the wild and crazy kid hosts that anchored those Saturday lineups. Get your hyper color shirts and slap bracelets out of storage and tune in. — E.A.

I’ll never forget the first time I saw Mulholland Dr. It was summer, 2001, in a tiny screening New York screening room, after I which I proceeded to walk around midtown Manhattan in absolute daze for a near hour, my mind trying to fully process what I’d just witnessed. David Lynch’s masterfully cryptic neo-noir has long benefitted from multiple viewings as you try to untangle its sordid web. But there’s rarely been as good an excuse to revisit it as its new debut on 4K Ultra HD from the tastemakers at The Criterion Collection. In addition to its new digital restoration, bonus features include 2015 interviews with the cast and crew (plug: see our Naomi Watts Role Recall interview here), on-set footage and deleted scenes. — K.P.

Mulholland Dr.: The Criterion Collection is now available on Amazon.

— Video produced by Anne Lilburn and edited by Jimmie Rhee