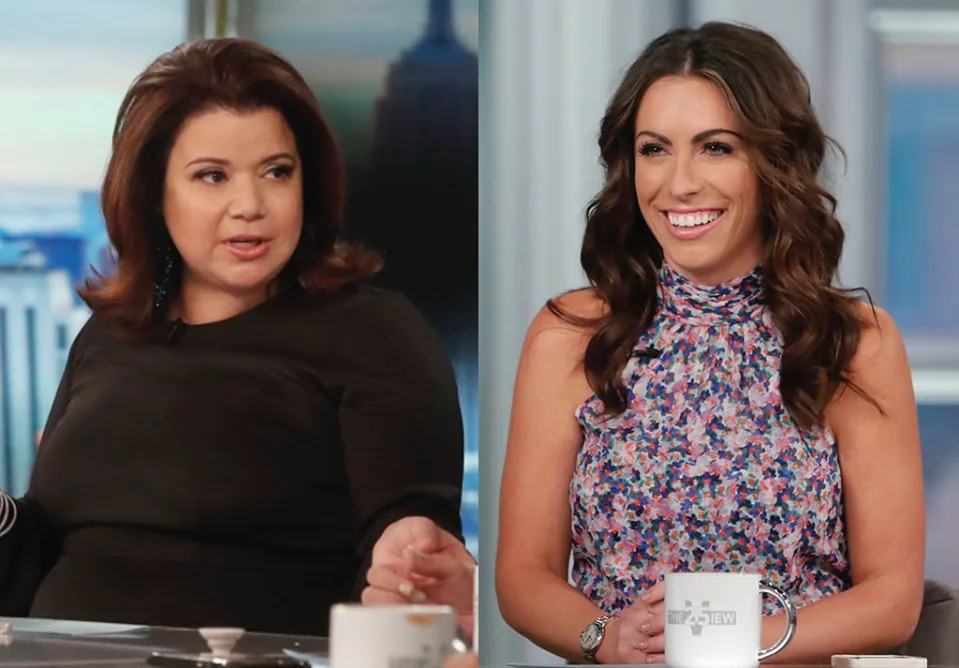 The View has not one but two new co-hosts.

The "humongous announcement" was made Thursday that, as expected, Alyssa Farah Griffin, former White House communications director under President Trump, will become a permanent member of the group for Season 26. The surprise was that Ana Navarro — a frequent guest co-host — will be joining too, an addition they called "long overdue." Both women are Republicans and will add their differing types of conservative commentary to the long-running ABC daytime talk show.

The touted co-host announcement came toward the end of the show with moderator Whoopi Goldberg saying, "We always want to honor [show creator] Barbara Walters's original version and vision that different views are represented at this table." Then Farah Griffin, who appeared on the show 29 times this season, auditioning for the role vacated by Meghan McCain last year, was named.

Farah Griffin, whose husband was in the audience, said she was "honored" to have a seat at the table to discuss "tough issues that frankly our elected officials often aren't tackling and we do that every day and we're having important conversations. I can't say how much I've learned from all of you, and I hope to learn from all of you."

She also said that it's been "a bit turbulent" the last few years for her — resigning from the Trump administration after the election and sitting down with the January 6 committee. "I worked for an administration that I ended up speaking out against fervently and continue to daily," she said. "That changes a lot in your life. I lost a lot of friends. I'm estranged from family members, but I'm so proud to have found my voice."

She also acknowledged to her new colleagues — also including Joy Behar, Sunny Hostin and Sara Haines — that it's going to get sporty sometimes, but I adore you women."

Humbled & honored to join @theView. This show paved the way for women of different backgrounds to speak up and speak out. It’s been a tumultuous few years for me personally, but I’m grateful & thrilled to have found my voice & to represent my values at the iconic table!

Just when it seemed like the news was over, they hinted at a second announcement — and after the break it was announced Navarro will be an official host too.

"There is one person who's way overqualified to be called our guest anymore," Goldberg said of Navarro, who joined the show in 2015 as a contributor and has been making recurring appearances on the panel as a guest co-host since 2018. She called the hiring of the political strategist as "long overdue."

Navarro quipped that "after many years, many hairstyles, many pounds up and dow, and appearances as a guest, a contributor, Snow White, a guest co-host, we're finally putting a ring on it and making it official."

She called it an "enormous, incomparable privilege to be part of a 25-year institution." She said that while at the table they've "spent a lot of time a lot of time talking about representation — and saying 'representation matters' — and that means that when a little Latina immigrant girl born in Chinandega, Nicaragua who came to this country at the age of 8 as a political refugee and found her home here gets the opportunity and the chance to have a platform, you grab it with both hands and you run with it."

Navarro, who is based in Coral Gables, Fla., will continue to commute to New York City for the show on a part-time basis. She explained that it's not the right time to make a permanent move to NYC due to her life in Miami with her husband and "clingy dog" as well as other work commitments.

The panel will now consist of six seats with co-hosts also including Joy Behar, Sunny Hostin and Sara Haines.