The 'Wall-E' that never was: How 'Planet of the Apes' inspired the abandoned version of the 2008 Pixar hit 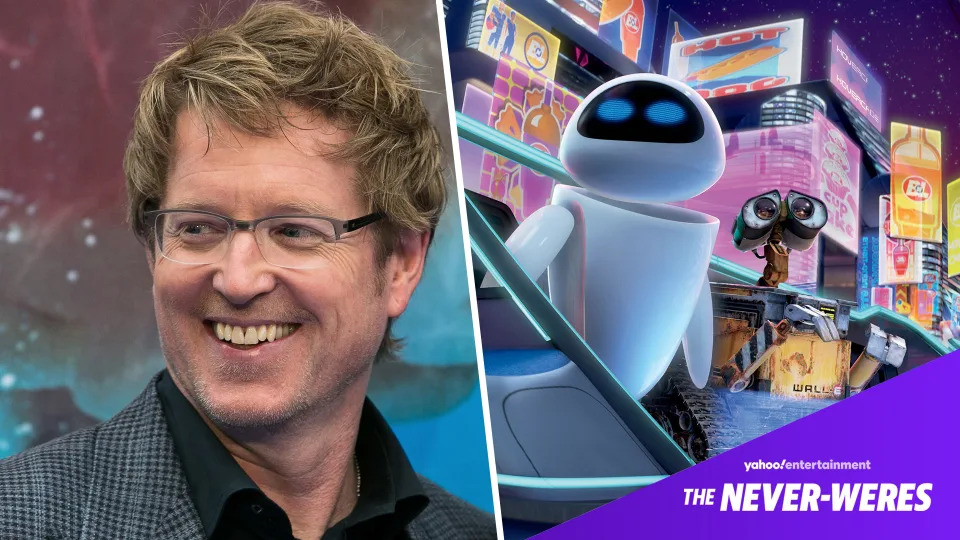 When Andrew Stanton started writing the 2008 Pixar favorite, Wall-E, he thought he had the perfect plot twist for his story about a little trash-compacting robot who goes on an awfully big intergalactic adventure. "I was born in 1965, so Planet of the Apes was the first big sci-fi epic I saw — long before the whole Star Wars thing," the writer/director tells Yahoo Entertainment. And Stanton calls Rod Serling's script for that 1968 blockbuster the first "blow your mind" story he remembers experiencing as a young movie lover, directly influencing the kind of experience he wanted to give the kids flooding the multiplexes to watch Wall-E with their parents.

But in the immortal words of Charlton Heston, midway through Wall-E's multi-year production process, Stanton went and blew it all up. While the film's first act — which depicts the title character's lonely life as the last operational Waste Allocation Load Lifter (Earth Class) on an abandoned Earth — never changed, the second half was entirely re-conceived and rewritten on the fly. It was a high-wire act that the director can now calmly describe as a "big shift" with the benefit of being on the other side of the experience. "On the number scale, it was a seven or eight as opposed to a two or three," he admits with a laugh. "It was a lot of work."

Fortunately, all of that work paid off. Released on June 27, 2008, Wall-E earned over $500 million worldwide and remains one of the crown jewels of a decade-long creative run that included Monsters Inc., The Incredibles and Up. And it's now the first Pixar film to join the Criterion Collection in a 4K UHD edition that's available Nov. 22 at most major retailers. Among the many bonus features on the three-disc set are featurettes and commentary tracks that reveal what the abandoned version of Wall-E would have looked like.

"It wasn't for lack of trying, and we certainly had fun doing it," Stanton prefaces before diving into the details of the Wall-E that never was. "But at a certain point we had to be honest with ourselves — it was a misfire."

Besides Planet of the Apes, one of Stanton's foundational inspirations for Wall-E — both the character and the film — were the silent classics by the likes of Charlie Chaplin and Buster Keaton. That provided him with the notion of building a story around a robot who "spoke"... but not in a language that audiences could understand. "I fell madly in love with the conceit of making a foreign film with no subtitles," he explains. That provided the basis for the movie's grim depiction of 29th century Earth — a far future where humans have abandoned the planet after it became uninhabitable due to environmental disasters created by excessive consumption and waste.

Even without human minders, Wall-E — who is "voiced" by Star Wars sound design maestro, Ben Burtt — continues to compress the mountains of trash that dot the post-apocalyptic landscape. But in his off-hours, he delicately handles artifacts from a long-vanished past, including a still-functioning VHS tape of the beloved Barbra Streisand musical, Hello Dolly! That's one of the things he shows to Eve, a probe droid who descends out of the heavens to terra firma on a mission to locate any sign of vegetation. The two 'bots end up bonding, and Wall-E ultimately follows Eve back into outer space, landing on the spaceship that initiated the plant-hunting mission.

And here's where the two story paths diverge: in the theatrical version, Wall-E encounters a lavish starcruiser populated by docile humans unable and unwilling to leave their floating chairs. While the ship's captain, B. McCrea (voiced by Jeff Garlin) is nominally in charge, day-to-day operations are actually managed by the A.I. enabled autopilot (Sigourney Weaver), which has been programmed with the directive to avoid returning to Earth at all costs.

But in Stanton's original version of Wall-E, the robot hero had a close encounter of a different kind. It turns out that EVE's ship is filled with gelatinous green aliens that the production team referred to as "Gels." In place of Captain McCrea, a royal family rules over these extraterrestrials, and keeps the population of mechanical workers in a state of perpetual servitude — much like the ape-controlled humans that Heston's time-traveling astronaut, George Taylor, meets in Planet of the Apes. Introduced into this hierarchical society, Wall-E ends up inadvertently becoming a Spartacus-like chaos agent and successfully leads a robot uprising, before the ship makes its way back to the ol' third rock from the sun.

Like Wall-E and Eve, Stanton intended for the Gels to have their own distinct language that, once again, wouldn't have subtitles for the audience to follow along with what was being said. "The whole film would be not just one language between one robot and a different robot, but language between aliens and them," he explains. "Their language was from the Ikea catalogue, so it was like bastardized Swedish. And they were gelatinous because we were inspired by the appearance of Jell-O fruit salad. We imagined these eyeballs in the middle of wiggly Jell-O and it made us laugh."

The unique design of the Gels meant that they required different functions of their robot servants. For example, M-O — the cleanliness-obsessed scene-stealer in the theatrical cut — was a "scraper" who was tasked with scraping excess green goo off of the royal family's bodies. "It was the most humiliating job," Stanton says, laughing. "There was this one scene where a royal leaned over and showed his butt, and you could see M-O going, 'I don't really want to do this.'" 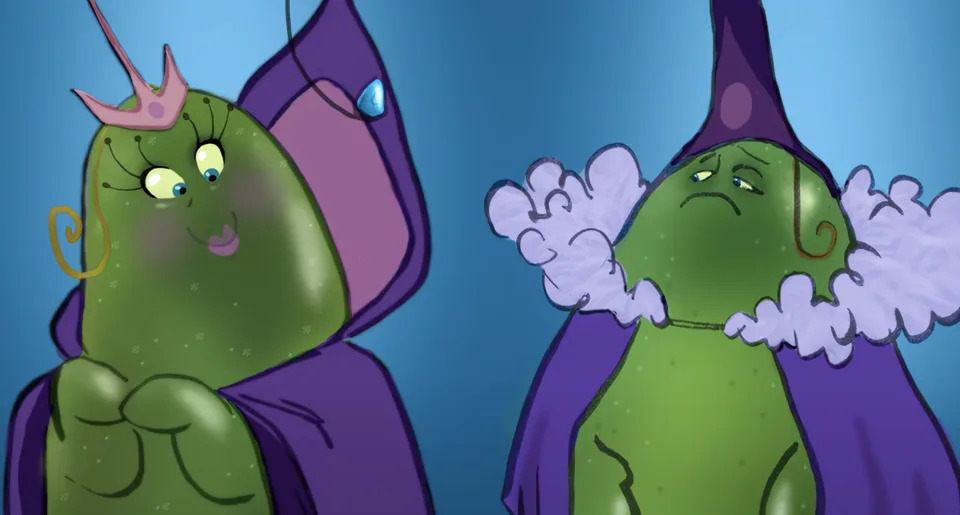 According to Stanton, that scene also gifted Wall-E's creative team with a signature catchphrase that came to define the abandoned version of the film. Trying to think up a Gel command word that would order M-O to start scraping, they eventually hit on: "Scruta-mahboot." That alien phrase was eventually immortalized on crew T-shirts. "That's a real Blue Harvest T-shirt, you know?" Stanton says, referring to the fake working title for Star Wars: Return of the Jedi that was used during the film's production. "Some people still have shirts that say, 'Scruta-mahboot' on the back in quote marks!"

Finally, in the story's final Apes-inspired climactic twist, it would be revealed that the Gels were actually damned, dirty... humans. "The big twist would be: 'That's us!'" Stanton recalls. "I loved the idea that humanity had devolved so much that they became aliens who didn't even know where they came from." Unfortunately, what worked so well for Serling wasn't working for Stanton. Wall-E was well into production when the director realized that his original vision of the film would almost certainly end in failure. "You could tell it was off," he says now. "It was frustrating people."

One major source of that frustration was the director's own "foreign film without subtitles" conceit. "There was actually fatigue at trying to interpret other dialogue. People got comfortable learning Wall-E's voice and they accepted Eve, but once we got into Act 2 and started to do it all over again with the Gels — who were more vocal — it just stressed the system, basically." 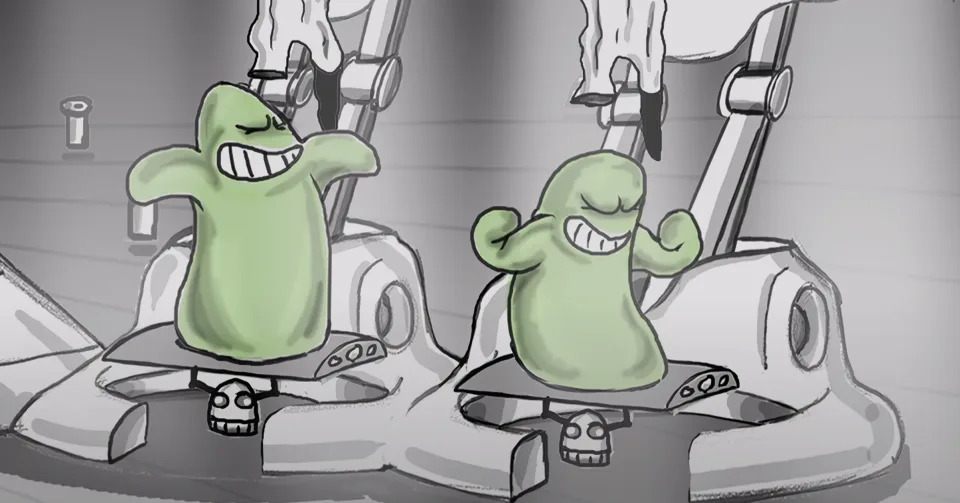 Early concept art for the Gels, who were revealed to be humanity's gelatinous descendants in the original version of Wall-E. (Photo: Pixar/YouTube)

Meanwhile, the Spartacus overtones of the main plot weren't gelling with the broadly comic presentation of Gel society. "Looking back now, it looks even sillier than it did at the time," Stanton confesses. "There was always a comic tone to the movie, and we thought we'd keep it more comic with an imperial kind of world that's gotten into this weird state. But it got off-point when we started to get into social class. We were making so hard to make it work that we took our eye off the ball of making sure that Wall-E and Eve were the most interesting things at the center of the movie."

With that in mind, the Gels re-evolved into recognizable English-speaking humans, while still retaining elements of their gelatinous nature. One of the real-world consultants Stanton employed on the film was evolutionary biology professor, James Hicks, who had advised NASA about the effects that long-term residency in outer space would have on the human body. "He said that they were literally having fights at the time about how to address the lethargy of going to Mars," Stanton explains. "Osteoporosis would kick in, and you would lose your bone structure and become big blobs."

"That coincided with the arrival of some of the technology that I was witnessing then," Stanton continues, recalling the introduction of iPods and iPhones — the forerunners of the attention-hogging devices that keep Wall-E's humans in a state of blissfully unawareness. "We were like, 'We can now take the veil off and show that this is what physically happened to us.' We didn't have to hide that. And that allowed the audience's attention to stay with the robots in the middle part of the movie."

Of all the credits on Stanton's directing résumé — a list that includes Finding Nemo, John Carter and episodes of blockbuster TV shows like Stranger Things — Wall-E remains the entry that changed the most radically while it was being made. But he insists that experience never altered how he approaches his job. "I always say it's like inventing a new color — there's no way to know if you're right or wrong," he explains. "You have to be very open minded, and you have to work fast and smart. My mantra always is: 'Be wrong as fast as you can.'"

In recent years, Pixar has revisited some of its mid-aughts hits in latter-day sequels, including Stanton's own Finding Dory, which premiered in theaters in 2016 — 13 years after its predecessor. But so far, Wall-E remains a standalone story, and Stanton says he has no plans to revisit those characters. "I'm not dying to go back to the same pool," he says. "I surprised myself that there was another Nemo movie. I didn't expect to be making it at the beginning, and it was fine. I loved doing it. But you basically go to college on each of these movies and at the end of those four years you're kind of ready to try something else."

At the same time, he also knows that Pixar could move ahead on a Wall-E: Part II without him. "I don't own this movie — a big studio owns it," he chuckles knowingly. "If I get hit by a bus tomorrow, they can do whatever they want with it! You just hope that everybody gets why it was good in the first place, and you also hope that the studio at large understands that you can't have a sequel without an original. So you've gotta keep those originals coming."

The Criterion Collection edition of Wall-E is available Nov. 22 at most major retailers, including Amazon.