'This World Cup is Southgate's moment to deliver'

This World Cup is Gareth Southgate's moment - it's the culmination of everything he has done since he was appointed England manager in 2016.

Reaching the semi-finals at his first major tournament, in Russia four years ago, was a bonus. England's run to the final of last year's European Championship felt much more methodical and planned out by him.

As part of that process, he has created this club environment in the international set-up and stuck with players that people have been telling him not to.

Now we are in Qatar and it's like everything he has been telling us about this team has to come together.

This is the moment to deliver and they are capable of doing that, so I am feeling very excited about their World Cup getting under way.

Southgate wants to take England and the country on another journey.

Don't get irritated against Iran

There is some negativity around England's prospects here because of their poor Nations League campaign, but when I think about their performance in the second half of their last game, against Germany, I feel quite the opposite.

Yes, that game ended in a draw, but it still felt like a moment where the players decided that, after a shocking campaign, they would show everyone what they can do.

That's what the club spirit Southgate has instilled can do. It can bring you together and you can have those moments when you turn things around completely as a team after a poor spell.

It's not guaranteed that England will build on that performance in Qatar, but I am optimistic that they will.

While I'm looking for England to generate some momentum during the group stage, that doesn't mean they have to hit their stride straight away.

Carlos Queiroz's Iran side are going to be very stubborn and difficult to break down in their opening game in Group B on Monday.

They won't make it easy for England and, unless they get an early goal, it will be frustrating at times.

I am extremely confident that they will win it, but I don't think it should be a game where fans should get irritated if they don't perform brilliantly to get the right result.

'They have talent' - how will England do in Qatar?

Choose a system - and stick with it

As well as the win, there are some other things I'd like to see on Monday, starting with a system that Southgate will use throughout the tournament.

There is a big discussion over whether he should play with three or four at the back.

I have a feeling Southgate wants to play with three centre-halves, because what happened in the Nations League exposed a few problems with using four at the back.

But you hear a lot of people saying he should play with a four-man defence against Iran and the so-called weaker sides, before switching later in the tournament against tougher opposition.

I disagree. Southgate should choose a system and stay with it, to let the team get into a rhythm of playing that way.

Take the shackles off Bellingham 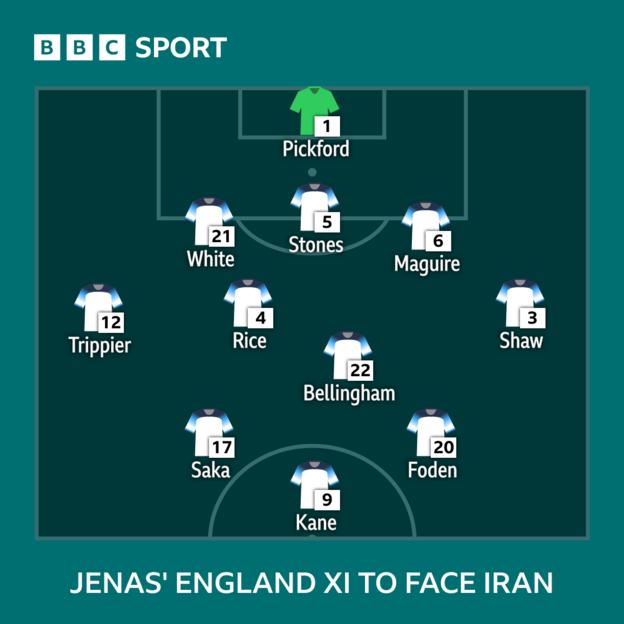 I am expecting Southgate to go with the same system as my team above, but the personnel might be different.

I feel like he might lean more towards Eric Dier than Ben White at the back, and I think he'll go with Raheem Sterling on the left of England's attack instead of Phil Foden.

Whoever he picks, though, there are some players who will need some freedom from the formation.

The biggest issue with playing five at the back is that you can end up with too many defensive-minded players on the pitch, even though they might be very capable going forward.

In this England team, it could impact on Jude Bellingham because if the wing-backs are both high up the pitch you might ask your two midfield players to sit in more.

Declan Rice and Kalvin Phillips did that at times when they played together, but during Euro 2020 Phillips got forward really well.

I would hope that in a game like this the shackles are off for Bellingham to go forward and create things.

That's going to be important against Iran, which is why the message from the manager has to be the right one from the start.

If Bellingham is told that he is there next to Rice to make the defence a bit more secure, you are just asking your front three to go and attack a team defending deep with a lot of bodies behind the ball.

That would play into the perception that Southgate's England team are pragmatic and negative rather than free-flowing and on the front foot - and I don't want them to start the World Cup that way.

England must be patient, whichever way they play, and realise this group is more challenging than in 2018 when they destroyed Tunisia and Panama and reached the last 16 after two games.

But I have no doubt they will beat Iran, because I don't think they can keep England out for the whole game.

They have got so many good footballers right through the team and, on top of that, their best player - Harry Kane - is in the best form he's ever been in coming into a major finals, and is fit as a fiddle.

No player has won the World Cup Golden Boot twice, so Kane knows he can make history in Qatar.

Wouldn't it be nice to see him get off to a good start with some goals against Iran?