Thousands march in Spain to demand end of violence against women

Protests come after revelations some men had prison sentences reduced due to a loophole in new sexual abuse law.

Thousands of people took to the streets in Madrid and Barcelona in marches to mark the International Day for the Elimination of Violence against Women.

Protesters, many wearing purple, marched down the Gran Via in Madrid’s city centre on Friday evening carrying banners and chanting “no is no, anything else is rape”, and “we women are not goods”. In Barcelona, people banged drums and lit flares.

Since 2003, when statistics began to count fatalities, 1,171 women have died as a result of gender violence in Spain, according to the ministry of equality. So far in 2022, 38 women have died.

“I’ve come here because of the problem of gender violence, because of all the deaths that are occurring, the mistreatment of women…” said teacher and Madrid resident Susana Rita, 42. 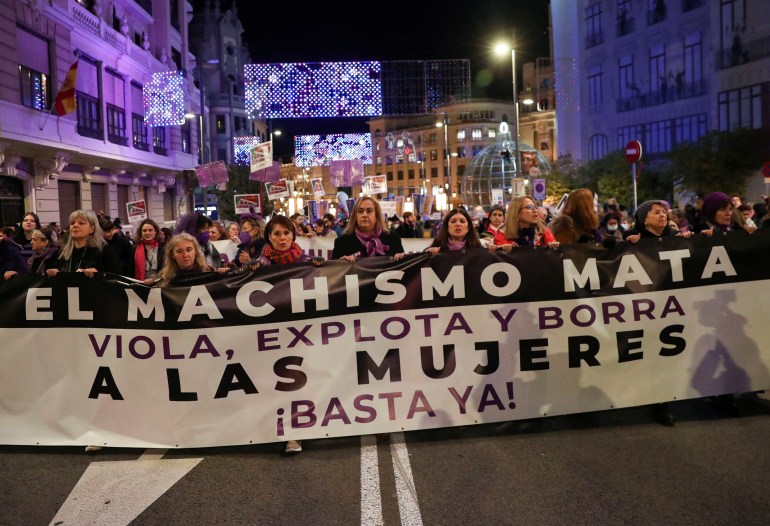 Demonstrators take part in a protest to mark the International Day for the Elimination of Violence against Women in Madrid, Spain, November 25, 2022 [Violeta Santos Moura/Reuters]

“Male violence is a tragic reality that shames us every day,” he said at a Socialist Party event.

The protests come after it emerged that some men had their prison sentences reduced because of a loophole in a new law governing penalties for sexual abuse, which has caused fury and heated debate among politicians.

The law, known as the “only yes means yes” law, classifies any non-consensual sex as rape but also sets lighter minimum sentences for certain sexual crimes.

At least 11 convicted sexual abusers have had their prison terms reduced and five men have been released from prison, according to the Europa Press news agency.

Chants of “only yes means yes” rang through the crowds on Friday evening.