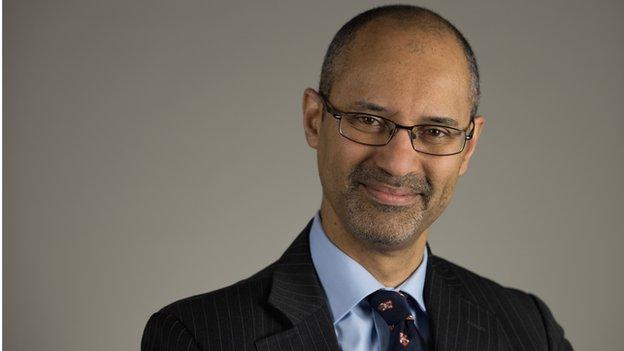 Tom Ilube's appointment as RFU chairman was ratified in March

The new chairman of the Rugby Football Union hopes his appointment to the most senior position in English rugby can inspire others to make a difference at all levels of the game.

Tom Ilube, the first black chair of a major sport, also wants to set out a "big and exciting vision" for rugby union over the next decade.

He hopes the combination of winning England rugby teams and a vibrant and inclusive grassroots will see young people "flooding into the game."

Ilube, born in Surrey to an English mother and Nigerian father, started playing rugby at the age of 10 and has been involved in the sport ever since as a supporter and a parent.

"To come all this way from being a community rugby player, watching my son play all over the country, then becoming chair of the RFU, I am just really, really proud," he told BBC Sport.

"There was a match - London Welsh v Llanelli in 1975 - and I scored a try in the junior match that happened before, and it was on Rugby Special. [Commentator] Nigel Starmer-Smith said 'will one of these boys be playing for their country one day?'

"I didn't manage to do that. But I did manage to become chair of the RFU, which isn't too bad." 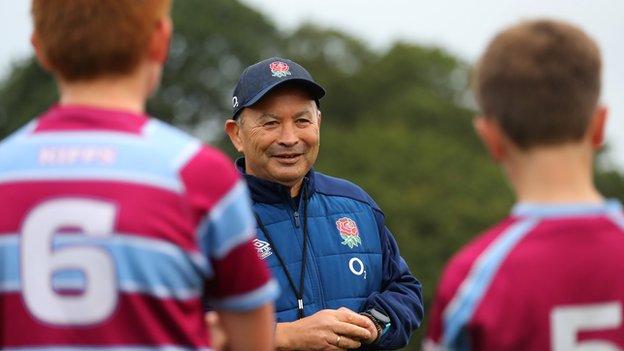 And Ilube has urged those involved in rugby's governance to think on a long-term basis, and look a decade into the future for the sport to realise its potential.

"I really would want there to be more conversations about what do we want rugby to look like by 2030," he said.

"We often in rugby look towards the next World Cup - a four-year cycle - I think we need to allow ourselves to look 10 years out. We need to paint a big vision, an exciting vision, of what our sport could be by 2030, in a way that attracts brilliant people and lifts the game today.

Diversity on the pitch and in boardroom 'important'

With England's diverse men's senior team representing a variety of backgrounds, Ilube feels his role away from the pitch could also help inspire the next generation.

"I think it really does help younger people coming through if they see people that remind them of their own journey and it makes them think 'if that chap can be in that position, why can't I?' And then they go for it," he explained.

"It is really important that you see people from all backgrounds both on the pitch and in the boardroom - and in the coaching roles and in the match official roles."

A businessman and entrepreneur, Ilube's achievements were recognised when he was named top of the 2017 Powerlist, which recognises influential people in the United Kingdom of African or Afro-Caribbean heritage.

"When I went home and I said to my wife, who is also black: 'Do you know I am the most powerful black person in England?'

"And she said 'You? You aren't even the most powerful black person in this house.' So she put me in my place there," he joked.

"What the Powerlist were interested to see is that I had achieved what I had achieved in my business career and philanthropic side, and they were very keen to highlight people who were achieving on that side as well as people on the public-facing, entertainment and sport side."

"There are so many opportunities, and I think if people can see folk like me, a black executive in a senior role in sport, I can begin to have a bit of an impact over time."

'Open and honest conversations' on safety

With the sport facing something of an existential crisis over safety, Ilube has urged parents to "come on the journey" with the governing bodies as they seek to make the game safer.

A host of former professional players are taking legal action against the sport's authorities after being diagnosed with early-onset dementia.

"Listening to the stories of ex-players is very moving and also helps to make sure we have open and honest conversations and we discuss the things we need to do going forward," Ilube added.

"I really would urge parents to come on that journey. I am a parent myself, my son plays, and I am very conscious of the need for our sport to be a safe sport that everyone can get involved in."

And despite the many challenges the sport is facing, from a governance, safety or spectacle standpoint, Ilube says he is optimistic about the future of the game.

"I am early in the role and I am being careful to listen. I want to listen to a lot of people about where they see rugby going," he said.

"It will be more open, more inclusive and the game will get faster.

"I think there will be more investment in the game over time, people wanting to get involved in the game, so I am really excited, and I think the [growth of the] women's game will be absolutely key to what rugby as a whole looks like over the next decade."