Trump photo op was not reason for removal of protesters: Report

An internal investigation into the forcible clearing of racial justice demonstrators in Washington, DC, was not influenced by former President Donald Trump’s plans to be photographed outside a church while holding a Bible.

The report released on Wednesday by the Interior Department’s inspector general concludes that the protesters were cleared by US Park Police (USPP) last June 1 so that a contractor begins the installation of new fencing.

Trump had been widely criticised for what appeared to be the forceful clearing of the demonstrators with pepper pellets and flash-bangs 30 minutes before he took the photo in front of St John’s Church, near the White House. 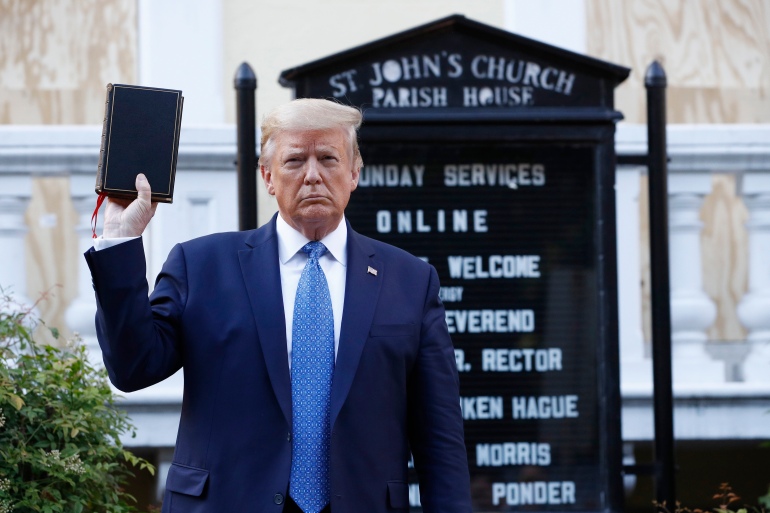 Former President Donald Trump holds a Bible as he visits outside St John’s Church across Lafayette Park from the White House in Washington, DC, on June 1, 2020 [File: Patrick Semansky/AP Photo]The demonstrators had taken to the streets in protest against George Floyd’s death in Minneapolis police custody several days earlier on May 25.

Former Minneapolis police officer Derek Chauvin, who is white, was convicted of Floyd’s murder in April.

Inspector General Mark Lee Greenblatt said in a statement that the USPP already had plans to clear the area and “had begun implementing the operational plan several hours before they knew of a potential Presidential visit to the park”.

Trump, who was deplatformed on Twitter, Facebook and other social media outlets following the January 6 insurrection that attempted to stop a joint session of Congress from certifying President Joe Biden’s victory to keep Trump in office, released a statement celebrating the report.

“As we have said all along, and it was backed up in today’s highly detailed and professionally written report, our fine Park Police made the decision to clear the park to allow a contractor to safely install antiscale fencing to protect from Antifa rioters, radical BLM protestors, and other violent demonstrators who are causing chaos and death to our cities,” Trump said.

“Again, thank you to the Inspector General!”

However, it appears officials in the Trump administration did try to convince authorities to clear the area. The report documents Trump’s attorney general, William Barr, encouraged commanders shortly before the push to clear the protesters because of Trump, but was dismissed. 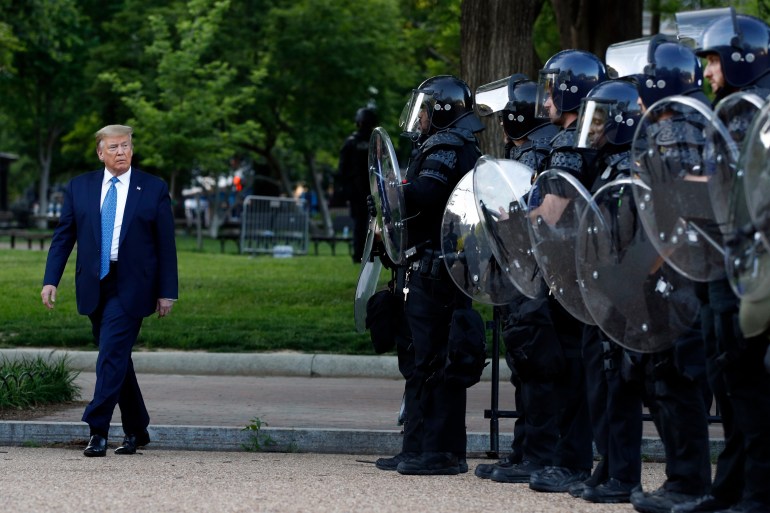 Then-President Donald Trump walks past police in Lafayette Park after he visited St John’s Church in Washington, DC, after racial justice protesters had been forcibly cleared [File: Patrick Semansky)The testimony continued: “He said he replied to the Attorney General, ‘Are you freaking kidding me?’ and then hung his head and walked away. The Attorney General then left Lafayette Park.”

Several different law enforcement agencies moved ahead of schedule and started engaging with protesters before the protesters had been sufficiently warned.

The report details how on June 1, a contingent from the Bureau of Prisons arrived at the scene late, did not receive a full briefing and used pepper pellets on protesters “contrary to the USPP incident commander’s instructions”.

The conclusions, which deny any political influence on decisions and cite fog-of-war confusion for any missteps, are likely to be dismissed as insufficient by critics of last summer’s crackdown.

The new report focuses on the decision-making of the USPP, which falls under the Interior Department, and its complicated interactions with various law enforcement entities, including the Secret Service and the Metropolitan Police Department.

It points out that “the USPP and the Secret Service did not use a shared radio channel to communicate” and determines that “weaknesses in communication and coordination may have contributed to confusion during the operation”.

Lafayette Park was the DC nexus of last year’s national wave of racial justice protests that were sometimes violent.

Trump and his administration cracked down on the protests across the US, including a series of “kidnappings” of demonstrators by federal authorities in Portland, Oregon.

Much of the criticism of the clearing, and the accusations of political influence, stem from the decision to move in before the 7pm curfew that Mayor Muriel Bowser had set. The push surprised protesters and was criticised as unnecessarily confrontational after two nights of clashes and property damage.

The report concludes that the USPP commanders viewed the curfew as irrelevant. It cites an incident commander as saying, “We were not enforcing the Mayor’s curfew. We’re a Federal entity. We don’t work directly for the Mayor.”

It continues that commanders on the scene ”did not believe protesters would comply with the Mayor’s June 1 curfew order or that waiting would necessarily reduce unrest”.