Trump to give statement in defamation suit over rape accusation

E Jean Carroll says Donald Trump raped her in a department store in New York City in the 1990s, a charge he denies.

Donald Trump is scheduled to answer questions under oath in a lawsuit filed by E Jean Carroll, a magazine columnist who has accused the former United States president of raping her in the mid-1990s in a department store dressing room.

The deposition, if it takes place as planned on Wednesday, will give Carroll’s lawyers a chance to interrogate Trump about the assault allegations as well as statements he made three years ago when she told her story publicly for the first time.

Carroll, a former Elle magazine columnist, sued Trump in Manhattan federal court in November 2019, five months after he denied raping her. In denying the allegations, Trump said at the time that Carroll was “not my type”.

Trump also has said Carroll’s rape allegation is “a hoax and a lie” and that the courts should have thrown out the lawsuit. Alina Habba, a lawyer for Trump, has called the case “entirely without merit”.

NOW: Trump just blew up his defense against E. Jean Carroll’s defamation case by calling her claims a "hoax" on Truth Social. Trump's lawyers agued he was protected against defamation as POTUS – but Carroll can now amend her complaint since Trump is a private citizen.

Trump’s legal team has worked for years to delay his deposition in the lawsuit, which was filed when he was still president.

A federal judge rejected his request last week for another delay, saying he could not “run the clock out on plaintiff’s attempt to gain a remedy for what allegedly was a serious wrong”.

Anything Trump says during his deposition could potentially be used as evidence in an upcoming civil trial. He has not faced any criminal charges related to Carroll’s allegations and any prosecution is unlikely. The deadline for criminal charges for sexual assaults that occurred in the 1990s has long expired.

Similar legal deadlines also applied to civil lawsuits over sexual assault. As a result, Carroll chose to sue Trump for defamation for comments he made in 2019 when he denied any wrongdoing.

She has maintained his denials and attacks on her credibility and character damaged her reputation.

According to Carroll’s account, she bumped into Trump as the two were shopping at the Bergdorf Goodman store across Fifth Avenue from Trump Tower in New York City. At the time, Carroll was on television as the host of an advice programme, “Ask E. Jean”.

She said the two engaged in friendly banter as she tried to help him pick out a gift. But when they were briefly alone in a dressing room, she said he pulled down her tights and raped her.

In a recent statement, Trump called that story “a complete con job”. 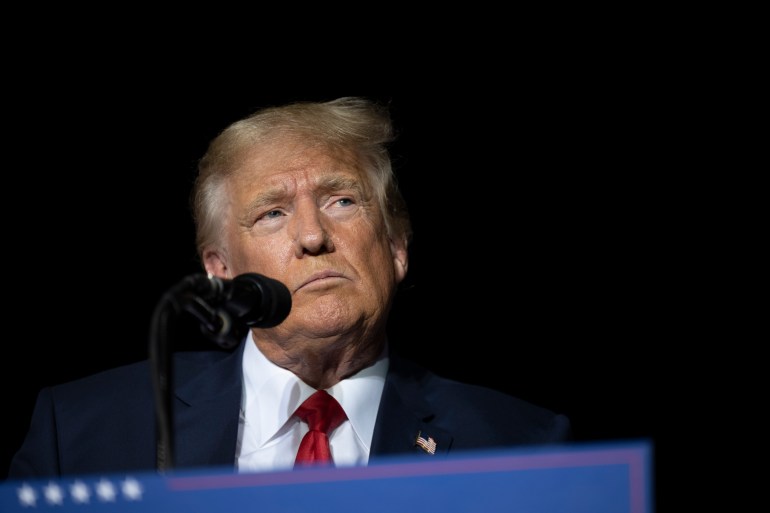 “I don’t know this woman, have no idea who she is, other than it seems she got a picture of me many years ago, with her husband, shaking my hand on a reception line at a celebrity charity event,” Trump said.

Carroll has said she also plans to sue Trump on November 24 for battery and inflicting emotional distress.