Turkey ‘playing a balancing act’ between Tel Aviv and Tehran

Istanbul, Turkey – Israel’s top diplomat arrives in Ankara on Thursday amid strident warnings of an Iranian plot to kill or kidnap Israeli tourists on Turkish soil.

His visit also comes as Turkey seeks to improve ties with both Israel and Iran.

Foreign Minister Yair Lapid has been among several Israeli officials to tell travellers to abandon plans to visit Turkey and instructed those inside the country to return home as soon as possible or shelter in their hotels.

While the Israelis have praised Turkish cooperation in foiling the alleged Iranian operations – said to be revenge for the killing of senior Iranian security officers by Israel in recent weeks – the Turkish authorities have been more restrained.

The only word from Ankara on the claims has been a foreign ministry statement last week that said Turkey “is a safe country and continues to fight against terrorism”.

“Turkey is trying to not take sides in the conflict between Iran and Israel but it’s also giving a firm message that it will not allow these kinds of operations – like the ones the Iranians have allegedly been planning – on its own soil,” said Suha Cubukcuoglu, an Istanbul-based geopolitical analyst.

Noting the visit of Crown Prince Mohammed bin Salman, Saudi Arabia’s de facto ruler, to Ankara on Wednesday, he said Turkey was “playing a balancing act” with the three strongest powers in the region.

During the past year, Ankara has been repairing relations with a number of regional rivals, such as Saudi Arabia, the United Arab Emirates, and Egypt. Also on its bridge-building list are Israel and Iran. 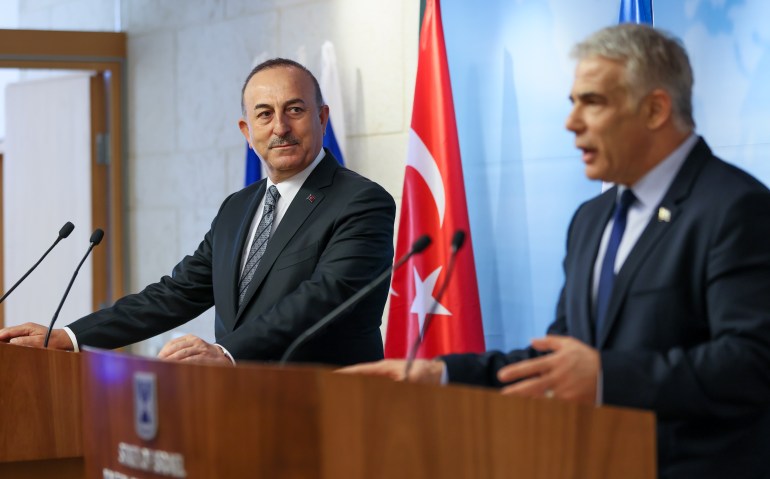 Cavusoglu and Lapid paved the way for improving diplomatic, security and economic relations.

“Turkey and Israel are engaged in a normalisation process that is moving ahead at a steady pace,” said Gallia Lindenstrauss, a senior research fellow at Tel Aviv University’s Institute for National Security Studies.

“Compared to the normalisation process in 2016, which lasted less than two years, this time around it seems the sides have learned from the previous failure and have managed till now to avoid some pitfalls.”

Ties between the historically close allies collapsed in 2010 when Israeli commandos killed 10 Turkish activists trying to deliver aid to Gaza.

Efforts to rebuild links were scuppered in 2018 as dozens of Palestinian protesters were killed by Israeli forces.

Israel and most Western states consider it a “terrorist” organisation – Turkey does not.

Ankara and Jerusalem face more challenges ahead, according to Lindenstrauss, namely potential flare-ups in the Israeli-Palestinian conflict but also the collapse of Israel’s coalition government and rising tensions between Turkey and Israel’s ally Greece.

Turkish relations with Iran are more stable, according to Lindenstrauss, but the countries are rivals in a number of conflicts, most notably Syria and northern Iraq.

Iranian-backed militias in Iraq, where Turkey launched its latest military campaign against Kurdish fighters in April, have struck Turkish bases in recent months, according to US intelligence.

Turkish and Iranian forces have also clashed in Syria, where Ankara is expected to embark on a new incursion.

“There’s competition happening all the time from Iraq, to Syria, to the Caucasus and even the Persian Gulf – Iran is jealously watching Turkey’s ability to make inroads in places like Qatar and most recently Saudi Arabia.”

He added, “You have Iranians watching carefully where this Turkish-Israeli rapprochement is heading, to see if this is aimed at them.”

Despite this, the neighbours are major commercial partners with trade reaching $4.77bn in 2021, a 69 percent rise from the previous year, despite sanctions on Iran and the COVID-19 pandemic.

Their citizens have enjoyed visa-free travel between the two countries for decades and Iranians are major property investors in Turkey.

“It’s a multi-faceted relationship, there’s a lot of competition but neither Turkey nor Iran wants this to get out of hand,” Vatanka said.

Amid these complex diplomatic relationships are Israel’s alarming claims of Iranian agents hunting for tourists to murder or abduct.

Despite not providing any proof publicly, Israel’s National Security Council has raised the risk level for travel to Turkey, putting it on par with Afghanistan, Iraq, Yemen and Iran.

The threat is assumed to be linked to deaths such as the May 22 assassination of a colonel in the elite Quds Force of the Islamic Revolutionary Guard Corps in Tehran, which Iranian officials blamed on Israel.

However, in the war of words between Israel and Iran, it is difficult to verify claims.

“I wouldn’t necessarily take what Iran and Israel say at face value because there is this intense competition between them,” Vatanka said.