Istanbul, Turkey – Turkish police fired tear gas and rubber bullets on Thursday to push back thousands of people, many of them women, who took to the streets of Istanbul to mark the International Day for the Elimination of Violence against Women.

The protests, part of a week of nationwide mobilisation, came amid calls for Turkey to rejoin the Istanbul Convention, a landmark agreement to protect women that includes 45 countries and was signed in Turkey’s largest city in 2011.

While Turkey was the first country to sign onto the convention, in July it also became the first to withdraw with the government of President Recep Tayyip Erdogan claiming the initiative had been “hijacked by a group of people attempting to normalise homosexuality”.

Turkish women have held mass protests twice over the withdrawal, in March when Erdogan first announced his intention to withdraw, and again in July, when the move became official.

Erdogan has argued existing laws in Turkey already provide enough protection for women, but women’s rights groups in the country say the convention provided a roadmap for important legislation that the government has never fully implemented.

At least 285 women have been killed by men so far in 2021 in Turkey, according to the We Will Stop Femicide platform, a non-governmental organisation that tracks such incidents and lobbies for killers to be prosecuted.

On Thursday, Turkey’s Interior Minister acknowledged his own ministry’s statistics on femicides in the country showed this year was on track to exceed last year – with 251 women killed by November 15, compared to 268 in 2020 – but the government was working to bring that number down.

“These are not just statistics, this is a matter of human lives, and we need to address this issue quickly,” Süleyman Soylu said at a meeting to review a national domestic violence reporting system. “We see violence against women as a humanitarian issue, and we cannot tolerate even one loss of life.” 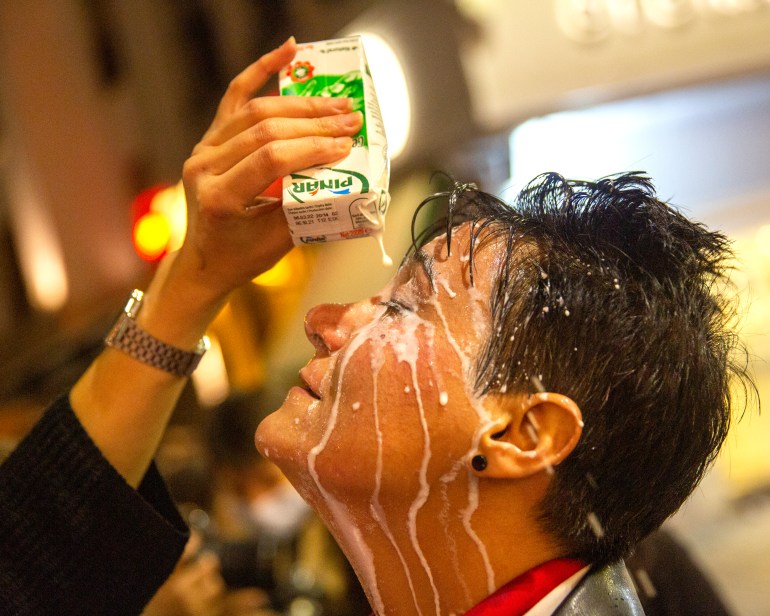 For many women in Turkey though, the government’s claims that it is interested in protecting them are difficult to believe, especially after its withdrawal from the Istanbul Convention.

“Women are filling the streets because in Turkey and all over the world, male violence is increasing,” 25-year-old Gokce of the Women’s Defense Network, an organisation connecting women activists across the country, told Al Jazeera. Like many others at the protest on Thursday evening, she also took part in the march in Istanbul in July. “We are in the streets to call for the right of women to defend themselves, to call for justice for women who were killed, for their right to work, for the rights of lesbian women.”

Gokce said the Istanbul Convention was the product of years of work by women’s rights activists, and that although Turkey never fully met the obligations laid out in it, the withdrawal was a shock.

“Erdogan withdrew from the Istanbul Convention in one night, with the excuse that it is spreading homosexuality,” she said. “Feminists wrote this convention, and they struggled to have it applied. They went from one court to the next to have it applied and it was still not fully applied in Turkey. It shouldn’t just be one man’s decision to pull out of it.”

Hundreds of women gathered as Gokce spoke, soon after sunset, near the southern end of the city’s most famous pedestrian street, Istiklal Avenue. Soon the crowd swelled to several thousand, with three groups converging from three different directions under the watchful eye of hundreds of riot police blocking the route north to Taksim square, the city’s traditional endpoint for political rallies.

“I don’t think they will let us march,” Akcan said, glancing up the street at the mass of riot shields and a double layer of metal barricades blocking the way. “They have already closed the exits and entrances to reach here, and I think we will march a bit and then the police will intervene.” 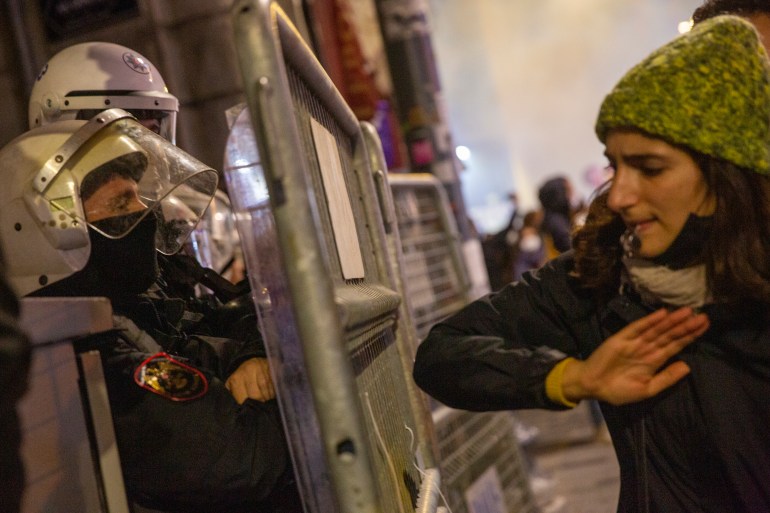 Protests like this one used to draw large, diverse crowds to mark occasions such as International Women’s Day, but since a failed coup attempt in 2016, police have dealt with such public displays of dissent with an increasingly heavy hand.

Rapidly rising consumer prices and a devaluing Turkish Lira sparked small protests across the country earlier this week, with police quickly intervening and detaining dozens of people in Istanbul on Wednesday night who were calling for the government to resign.

At the women’s rights protest on Thursday, participants also chanted slogans calling for Erdogan to step down, alongside placards and chants calling for the Istanbul Convention to be rejoined, and an end to what many see as daily cases of brutal violence against women.

“Every day in our homes, in the streets, in our workplaces, we are subjected to violence,” one woman who gave her name as only Nihal told Al Jazeera. “We’ve had enough.”

At the protest on Thursday, many women carried placards with the number “6284″ on them, referring to the name of the law Erdogan’s government passed in 2012 to implement the Istanbul Convention.

Among other measures, the Law on Protection of Family and Prevention of Violence against Women made it easier to obtain restraining orders and called for the building of hundreds of special shelters for victims of domestic violence. Rights groups say while some shelters were established, they fell far short of the hundreds that were supposed to be made available. To keep pressure on the government to pursue that law and other reforms, they say the Istanbul Convention needed to be kept in place.

President Erdogan, though, has blasted feminists “who begin every sentence with the Istanbul Convention” over their calls to rejoin the agreement.

“We have completely removed the Istanbul Convention from our agenda because we already have the steps to be taken in this agreement in our own laws on the agenda,” he said on November 17 in Ankara. 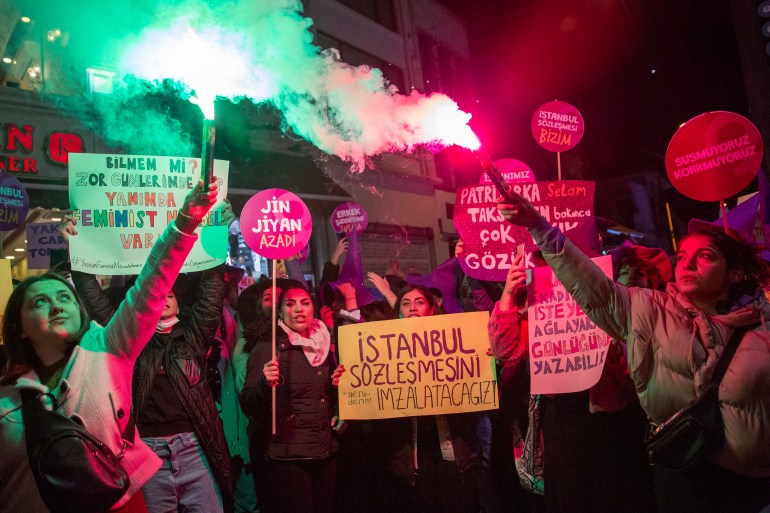 A woman holds a placard reading “We will make you sign the Istanbul Convention” at a rally in Istanbul, Turkey on Thursday, marking the International Day for the Elimination of Violence against Women [Ozge Sebzeci/Al Jazeera]

As the protesters continued up Istiklal Avenue on Thursday night, police gradually pulled back to let them march, but then, just a few hundred metres from where the gathering began, they suddenly stopped. Hundreds of riot police massed behind barricades, backed by half a dozen water cannon trucks and dozens of buses to transport potential detainees. Groups of police fanned out carrying rubber pellet guns, and launchers for tear gas canisters, while others put on gas masks and strung plastic zip ties from their belts.

The standoff between police and protesters went on for nearly half an hour, as protesters chanted “open the barricades!”

Moments later, the riot police made their move, firing rubber bullets and tear gas canisters into the pavement, the start of a gradual push against the crowd until it dispersed nearly an hour later.