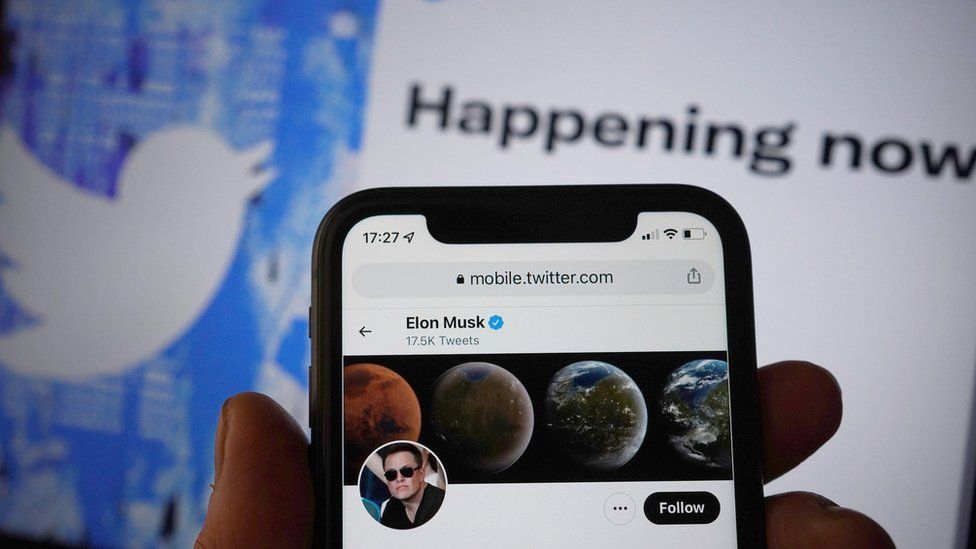 Twitter staff in the UK who face losing their jobs have been given three days to nominate someone to represent them in a formal consultation about their employment.

Under UK employment law a consultation has to be carried out before redundancies can be made.

An email seen by the BBC from Twitter's European HR department says they have until 0900 Tuesday to decide who to put forward, and was sent on Friday night.

Staff can nominate themselves.

If there are more than ten nominations, an election will be held, the email said, although there were no details offered as to how this would be organised.

It comes after Elon Musk, the company's new owner, said he had "no choice" but to cut 50% of Twitter's staff worldwide.

Mr Musk said that the firm he bought for $44bn at the end of October is currently losing around $4m per day.

Following the announcement, the workers union Prospect said it now has "dozens" of Twitter UK staff members on its books.

If more then 100 people in the UK are affected by a firm's job cuts then there must be a 45 day consultation before any redundancies can be made, it added.

A senior official told the BBC three days was a very short time frame for people to organise themselves or communicate with each other, especially given that most still have frozen access to company-wide work platforms such as the messaging service Slack and their Twitter email accounts.

Seven days was considered a "reasonable" period of time for this to take place, she said, although there is no official rule.

Mr Musk first announced he wanted to buy Twitter for $44bn in April - but it took a long and tumultuous six months for a deal to be struck.

In July, the tech billionaire said he had pulled out of the sale because he had not been given enough information on how many real, active Twitter users there were.

Twitter responded by taking Mr Musk to court so that he would honour the sale.

The court case was then stalled when Mr Musk announced that he had purchased the platform for $44bn at the end of October.

There is uncertainty over Mr Musk's plans for the platform's future. Online safety groups and campaigners have expressed concerns about his plans to relax content moderation and reverse permanent Twitter bans given to controversial figures, including former US president Donald Trump.

He also sparked criticism for suggesting that verified Twitter users pay $8 (£7) a month for their blue ticks.