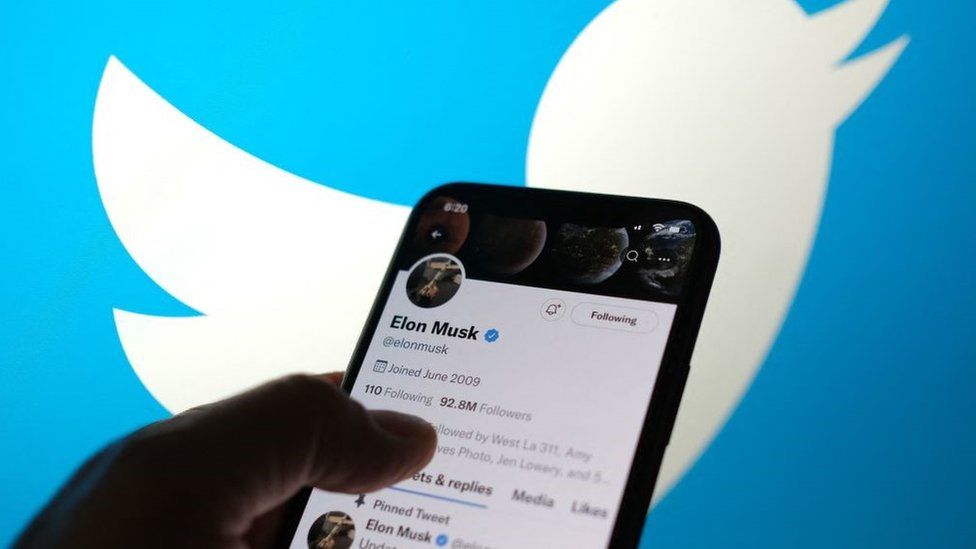 Elon Musk says Twitter users engaging in impersonation without clearly specifying it as a parody account will be permanently suspended.

Twitter previously issued a warning before suspending accounts, but there would now be no warning, he announced.

A number of accounts that changed their name to Elon Musk and mocked the billionaire have already been suspended or placed behind a warning sign.

At the end of last week he laid off around half of the company's workforce.

He has also confirmed plans to allow users to buy blue-tick, verified status.

Detailing the new policy on parody accounts, Mr Musk tweeted: "Previously, we issued a warning before suspension, but now that we are rolling out widespread verification, there will be no warning."

He added that "any name change at all will cause temporary loss of verified checkmark".

Going forward, any Twitter handles engaging in impersonation without clearly specifying “parody” will be permanently suspended

Several accounts that had changed their name to the new Twitter owner have been suspended or placed behind a warning sign, including those of US comedian Kathy Griffin and former NFL player Chris Kluwe.

Other accounts, including one parodying former US President Donald Trump by comedian Tim Heidecker, are yet to be suspended.

Mr Musk has previously said he opposed permanent bans on Twitter, including that of Mr Trump's official account. Mr Musk said last week that banned accounts would not be reinstated until there was "a clear process for doing so". He pointed out that he was not banning an account that followed his private plane.

The New York Times reported on Sunday that Twitter was delaying the rollout of verification check marks to subscribers of its new service until after Tuesday's US midterm elections. At the weekend, the social media site's website app began offering an update that will charge $8 (£7) a month for its blue, verified checkmark.

On Friday, the billionaire said Twitter was losing more than $4m per day, insisting that this gave him "no choice" over culling around half the company's 7,500-strong workforce.

The cuts - as well as Mr Musk's fierce advocacy of free speech - have caused speculation that Twitter could water down its efforts on content moderation.