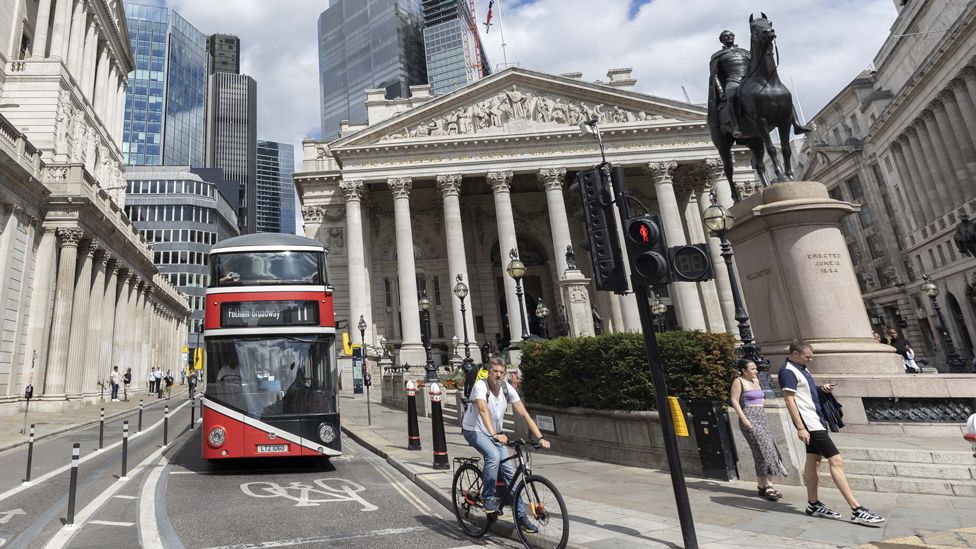 The Bank of England has hiked interest rates by the most in 27 years and warned the UK will fall into recession.

Interest rates rose to 1.75% as the Bank battles to stem soaring prices, with inflation now set to hit over 13%.

Bank governor Andrew Bailey said he knew the cost of living squeeze was difficult but if it didn't raise rates it would get "even worse".

The main reason for high inflation and low growth is soaring energy bills. driven by Russia's invasion of Ukraine.

A typical household will be paying almost £300 a month for their energy by October, the Bank warned.

The Bank's governor Andrew Bailey said he had "huge sympathy and huge understanding for those who are struggling most" with the cost of living.

"I know that they will feel, 'Well, why have you raised interest rates today, doesn't that make it worse from that perspective in terms of consumption?', I'm afraid my answer to that is, it doesn't because I'm afraid the alternative is even worse in terms of persistent inflation."

However, many households will be squeezed further following the interest rate rise including some mortgage-holders.

Now rates have gone up to 1.75%, homeowners on a typical tracker mortgage will have to pay about £52 more a month. Those on standard variable rate mortgages will see a £59 increase.

"At present I repay around £1,800 a month but I have worked out that I will conservatively need to pay another £250 a month to keep up with the debts," he said.

"I will simply have to tighten my belt and be extra cautious in my spending, which means all of those non-essential items will be cut from my budget."

"Many took on credit to pay their bills and are falling behind on their payments. This will be much harder to pay off with higher interest rates putting more families in financial peril."

The Bank expects the economy to shrink in the final three months of this year and keep shrinking until the end of 2023.

This would make it the longest downturn since 2008, when the UK banking system faced collapse, bringing lending to a halt.

The downturn is not set to be as deep as 14 years ago, but may last just as long.

Energy bills have already risen sharply this year, squeezing household incomes and leading to slower growth for the UK economy.

Russia has reduced supplies to Europe as it wages war in Ukraine and fears are growing it may switch off the taps altogether.

The potential of gas supply problems has led to the wholesale price soaring, which has led to energy firms passing those costs onto customers - pushing up household energy bills by unprecedented amounts.

As well as energy, households have been hit by higher petrol and diesel costs and food prices.

The Bank warned UK economic growth was already slowing, adding: "The latest rise in gas prices has led to another significant deterioration in the outlook for the UK and the rest of Europe".

The interest rate rise is the sixth increase in a row as the Bank battles to dampen inflation to its 2% target.

It is the most piercing of warning sirens set off by the Bank of England.

The largest rate rise in a quarter of a century, in attempt to temper even higher peaks in inflation of an incredible 13% are what the Bank of England actually did today. But it is its prediction of a recession as long as the great financial crisis and as deep as that seen in the early 1990s that is the big shock here.

This is a proper full fat recession now being predicted by the Bank, and at the same time a 42-year high in the rate of inflation. It is a textbook example of the combination of stagnation of the economy and high inflation - stagflation.

It obviously will raise questions as to why rates are being hiked into a recession, at a time when consumers are already pulling back from spending. The Bank's answer will be that rates are still low by historic standards, and they just cannot provide further fuel for these extraordinary but hopefully temporary high inflation rates, to last for years.

But make no mistake, a forecast such as this, would mean a wrecking ball to the forecasts for government borrowing. Forget about the £30bn room for manoeuvre or "fiscal headroom" we heard so much about.

With this level of energy shock, whoever is in power, would need to prepare further massive consumer support, and feasibly, rescue schemes for the energy sector too. I cannot recall the Bank of England predicting a recession of this length in advance of the event.

It is the sort of forecast that in other circumstances might have prompted an immediate emergency Budget. It may just upend all the plans we have heard so much about.