Boris Johnson played down differences between UK and the US about the effect of Brexit on the peace in Northern Ireland, saying the two countries and the EU were in ‘complete harmony’ on the 1998 peace agreement.

British Prime Minister Boris Johnson has hailed US President Joe Biden as “a big breath of fresh air” and played down differences about the effect of Brexit on the peace agreement in Northern Ireland, after they met on the eve of the G7 summit.

The pair were all smiles as they posed for the media before 90 minutes of closed-door discussions, overshadowed by claims Biden had ordered a rebuke to London amid its dispute with the European Union about new trading arrangements in Northern Ireland.

After the talks in Cornwall, England, Johnson said the United States, United Kingdom and EU were in “complete harmony” on finding solutions to uphold the 1998 peace deal that ended decades of sectarian conflict in the British province.

“There’s complete harmony on the need to keep going, find solutions, and make sure we uphold the Belfast Good Friday Agreement,” Johnson said.

After Brexit, a new arrangement was needed for the border between Northern Ireland, which is part of the UK, and Ireland, because the EU requires certain goods to be inspected and others not to be admitted at all.

Ahead of a June 30 deadline, continuing negotiations about goods – including sausages – have been contentious and have attracted the attention of the White House.

US officials have said the US does not plan to be involved in the negotiations and that Biden would not lecture Johnson but would urge that a resolution be reached expeditiously.

“I think what’s interesting is Northern Ireland is a fantastic place and it’s got amazing potential. It is a great, great part of the UK,” said Johnson.

Asked if Biden had made his alarm about the situation in Northern Ireland very clear, Johnson said, “No, he didn’t.”

Johnson said Biden wanted to work with London on a huge range of issues ranging from climate change and COVID to security.

“It’s a big breath of fresh air,” Johnson said of the talks with Biden. “It’s new, it’s interesting and we’re working very hard together. We went on for about an hour and 20 or so. It was a long, long, good session. We covered a huge range of subjects.”

Biden was similarly positive about the meeting with Johnson, and said the pair discussed a broad range of issues.

“We affirmed the special relationship between our people,” Biden said.

The American president said the alliance is addressing challenges that include cybersecurity, new technologies, global health and the climate crisis.

A statement from the White House released shortly after the meeting between the two leaders said “the UK and US reaffirm their commitment to working closely with all parties” to protect the [Good Friday] Agreement and “realise its vision for reconciliation, consent, equality, respect for rights, and parity of esteem”.

The US president staunchly opposed Brexit, the UK’s exit from the EU that Johnson championed, and has expressed great concern about the future of Northern Ireland. 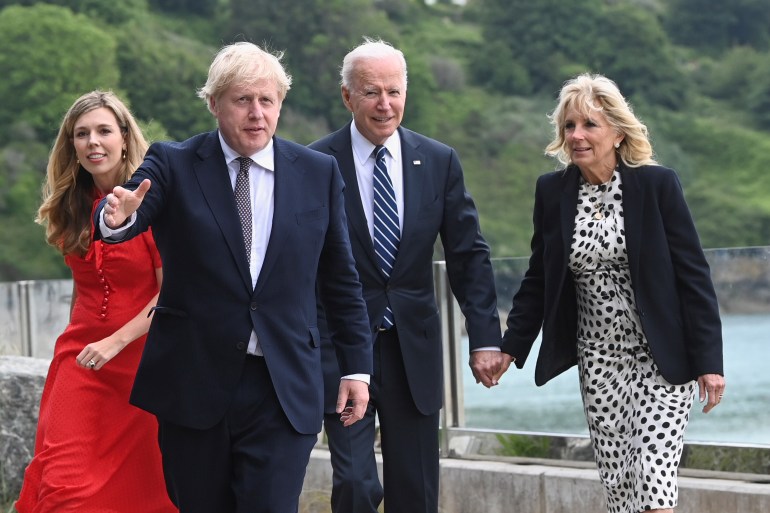 Biden said the two leaders also updated the 80-year-old Atlantic Charter, which led to the United Nations and NATO.

The new one looks to the challenge posed by countries like China and Russia with its promises to promote free trade, human rights and a rules-based international order, and to counter “those who seek to undermine our alliances and institutions.”

The new charter also took aim at “interference through disinformation” in elections and murky economic practices, charges that the West has levelled at Moscow and Beijing.

Biden and Johnson also agreed on a new joint task force to examine how to resume travel between the UK and the US, following successful coronavirus vaccination campaigns in both countries.

They also pledged to work on “expanding trade and progression towards a future UK-US free trade agreement”, according to Downing Street.

Biden has warned that any UK backpedalling on its post-Brexit commitments to the EU regarding Northern Ireland could imperil the US trade negotiation.