On the anniversary of Nazi Germany’s invasion of the Soviet Union on June 22, Ukraine’s president says Russia did the same to his country when it moved in its forces on February 24.

Ukraine’s President Volodymyr Zelenskyy says Russia did the same when it invaded Ukraine on February 24 as Hitler when he launched surprised attacks on the Soviet Union on June 22, 1941 Russia has commemorated the 81st anniversary the invasion, with President Vladimir Putin laying a wreath at the Tomb of the Unknown Soldier at the Kremlin wall. In Ukraine’s occupied port city of Mariupol, pro-Moscow activists lit 10,000 candles to spell out the phrase “Remember 22.06.1941.” A Ukrainian official overseeing the country’s push to join the European Union says she is “100 percent” certain all 27 EU nations will approve Ukraine’s candidacy during a summit this week, perhaps as soon as Thursday. 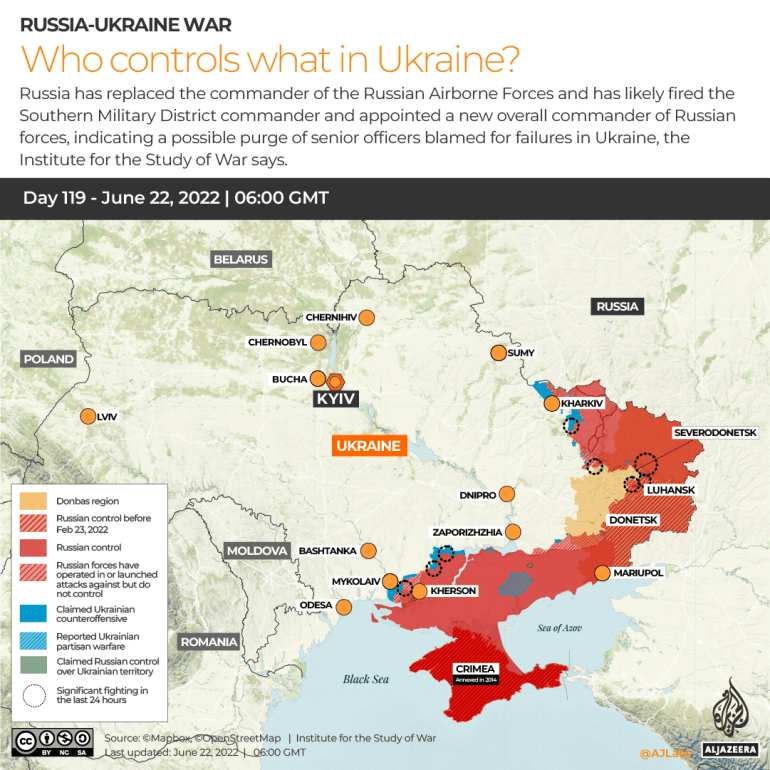 These are the latest updates:

Russia commemorated the 81st anniversary of Nazi Germany’s invasion of the Soviet Union on Wednesday, with Russian President Vladimir Putin laying a wreath at the Tomb of the Unknown Soldier at the Kremlin wall.

Hitler’s forces launched surprise attacks on Kyiv, Moscow and Belarusian Brest on June 22, a day that marks the start of what Russia calls the Great Patriotic War and is today known in the country as Day of Remembrance and Sorrow.

The Main Cathedral of the Russian Armed Forces kicked off commemorations after midnight with a Divine Liturgy and a memorial service for the estimated 27 million Soviet soldiers and civilians killed in the war, the Moscow Times reports. Later 1,418 candles were lit outside the cathedral for each day the war lasted. Russian President Vladimir Putin attends a wreath-laying ceremony, which marks the anniversary of the beginning of the Great Patriotic War against Nazi Germany in 1941, at the Tomb of the Unknown Soldier by the Kremlin wall in Moscow, Russia June 22, 2022 [Sputnik/Mikhail Metzel/Kremlin via Reuters]

Russia did the same in Ukraine as Germany when it invaded Soviet Union: Zelenskyy

Russia did the same on February 24 when it invaded Ukraine as Nazi Germany did on June 22, 1941 when it invaded the Soviet Union, Zelenskyy has said on the WW2 anniversary.

“Today, June 22, is the Day of Mourning and Remembrance of the Victims of War. A war that was to remain forever in the history of the 20th century and was never to be repeated. But it is repeated,” Zelenskyy said in his morning address.

“Today there is no shortage of words that Russia did the same on February 24 as the Nazis did on June 22… And I want to add only one thing. Then 1418 days passed from the morning of the invasion to the defeat of the aggressor. We must liberate our land and achieve victory, but faster. Much faster,” he said.

This is our national goal, and we must work to achieve it on a daily basis. Not only the state, but also every citizen – at the level at which it is possible.

This day in 1941, Nazi Germany invades the Soviet Union with the largest invasion force in the history of warfare, called operation Barbarossa. Approx. 3 million personnel invaded the USSR along a 2,900-kilometer (1,800 mi) front. #WW2 pic.twitter.com/xk6VjxESmk

A Ukrainian official overseeing the country’s push to join the European Union has said she is “100 percent” certain all 27 EU nations will approve Ukraine’s candidacy during a summit this week.

In an interview with The Associated Press, Deputy Prime Minister for European and Euro-Atlantic Integration Olha Stefanishyna said the decision could come as soon as Thursday, when the leaders’ summit starts.

Stefanishyna said the Netherlands, Sweden and Denmark had been skeptical about starting accession talks with Ukraine while it is fighting Russia’s invasion but are now supportive. Asked how confident she was that Ukraine would be accepted as an EU candidate, she said: “The day before the summit starts, I can say 100 percent.”

EU candidate status, which can be granted only if the existing member countries agree unanimously, is the first step toward membership. It does not provide any security guarantees or an automatic right to join the bloc. Ukraine’s membership bid is the top order of business for EU leaders meeting in Brussels.

You can read all the updates from June 22 here.