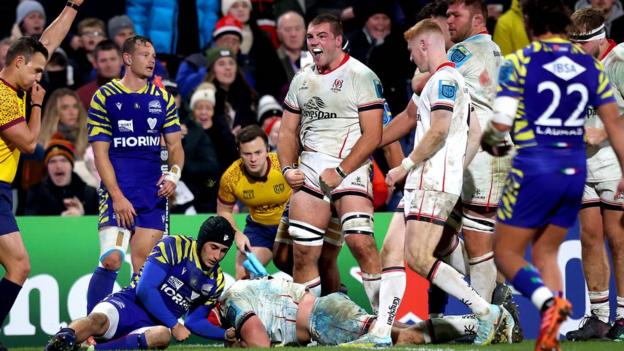 Tries from Tom Stewart, Matty Rea, Callum Reid and Stewart Moore had secured the bonus point for Ulster by half-time.

Zebre scores from Lorenzo Pani and Erich Cronje, plus a penalty from Geronimo Prisciantelli reduced the deficit but further tries from Tom Stewart and Andrew in the second half put the game beyond doubt.

Another positive for Ulster was the second-half appearance of club captain and Ireland second-row Iain Henderson, who made his long-awaited return from injury for his first appearance of the season.

Led by South African World Cup winner Duane Vermeulen, the home side got off to a strong start with hooker Stewart powering over in the corner for the game's first score inside the opening five minutes.

That lead was extended within four minutes. A sweeping move through midfield was finished off by flanker Matty Rea as Dan McFarland's side set down an early marker on their return to action after a three-week break for the Autumn Internationals.

Ulster's ill-discipline gave their visitors a route back into the game. The penalty count kept the pressure on the home side and referee AJ Jacobs eventually punished the home side after 30 minutes.

Sam Carter's cynical obstruction of Prisciantelli was yellow-carded and Zebre responded immediately with full-back Lorenzo Pani going over to reduce the deficit.

McFarland's side reasserted their dominance thanks to a converted try from prop Reid and a well-executed backs move finished by full-back Moore to go in the far happier of the two sides at the interval.

After receiving only one yellow card in their opening six games, Ulster were reduced to 14 men with barely two minutes on the clock after the restart.

Nathan Doak was sent to the sin bin for an illegal tackle on Simone Gesi and, with Moore filling in for the absent scrum-half, Ulster maintained their lead over the Italians.

The crowd in the Kingspan Stadium was lifted in the third quarter by the introduction of Henderson which was followed almost immediately by a second try of the evening for Tom Stewart.

As the game drew to a close, Stewart's replacement, John Andrew, once again utilised Ulster's powerful maul to steer himself towards the line and crash over only for the try to be disallowed.

The last action of the game was a converted Zebre try from Enrich Cronje to reduce the deficit but it was ultimately a comfortable bonus point win for the hosts.

Ulster will now turn their attention towards their top-of-the-table clash with Leinster next week.