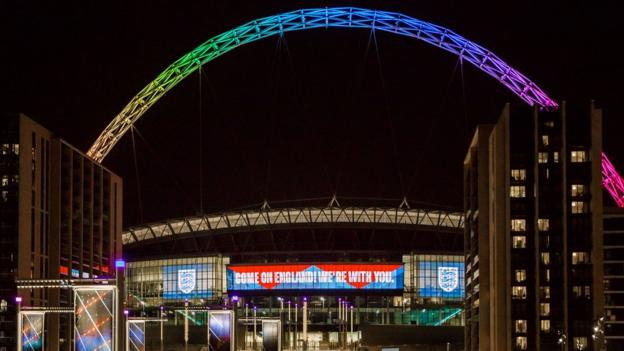 England, Wales and five other European nations planned to wear the armband to promote diversity and inclusion.

They were forced to abandon those plans after Fifa threatened them with sporting sanctions.

"It was unlimited. They would take disciplinary action against any player that was wearing the armband on top of having a yellow card," he told ITV Sport.

The governing bodies of England, Wales, Belgium, Denmark, Germany, the Netherlands and Switzerland said they had written to Fifa in September informing them about the OneLove armband, but did not receive a response.

"We had a lot of meetings with Fifa over that period and on Saturday before the game we felt we'd reached an understanding where we would wear it," added Bullingham. "We hadn't got permission but we would face a fine for it.

"Unfortunately then, on the day of the game, they gave us 10 minutes' notice - two hours before we were due to go to the game.

"They came here with five officials and they ran us through a scenario where, at a minimum, anyone wearing the armband would be booked and face disciplinary action on top of that."

How do LGBTQ+ football fans feel about the Qatar World Cup?

In response to Fifa's threat, Germany's players covered their mouths for the team photo before their match against Japan on Tuesday in protest.

No disciplinary action was taken, though the German football federation (DFB) said it was going to investigate whether Fifa's threat to sanction players for wearing the armband is legal.

The England players opted against further protest before Friday's match against USA, although the Wembley arch was lit up in rainbow colours.

"The FA will continue to show our support to the LGBTQ+ community and all other communities during this tournament and long beyond, starting with lighting up the Wembley Stadium arch in rainbow colours for Friday night's match with the USA," the FA said in a statement.

Pride in Football, network of LGBT+ fan groups in the UK, criticised the FA for not doing enough.

"Although appreciative of the gesture, responding with something miles away from Qatar is more a way of getting brownie points than creating change," the group wrote on Twitter.

"Has this been done as a result of seeing countries like Germany actually react to the breakdown of the armband? Maybe this reaction would've been more effective on Monday."