Looting and violence continue for a third day in the capital as Australian police arrive.

Foreign countries are responsible for stoking the disaffection that has led to three days of violent protests in the Solomon Islands, Prime Minister Manasseh Sogavare said on Friday, as police pushed back protesters trying to reach Sogavare’s private residence.

Police fired tear gas and warning shots at protesters, the AFP news agency reported, citing its journalists at the scene. The group had already set fire to at least one building in the area.

Sogavare on Wednesday declared a 36-hour curfew in Honiara, the country’s capital, but protesters have paid little heed to the lockdown.

Many of them come from the most populous province of Malaita, and were opposed to Sogavare’s abrupt decision in 2019 to break off diplomatic ties with Taiwan and establish formal links with China instead. Malaita’s leaders still maintain contact with Taiwan and receive outsized aid from Taipei and Washington.

Sogavare said the anger had been stoked by unnamed foreign countries.

“I feel sorry for my people in Malaita because they are fed with false and deliberate lies about the switch,” Sogavare said in an interview with the Australian Broadcasting Corporation.

“These very countries that are now influencing Malaita are the countries that don’t want ties with the People’s Republic of China, and they are discouraging Solomon Islands to enter into diplomatic relations and to comply with international law and the United Nations resolution.” 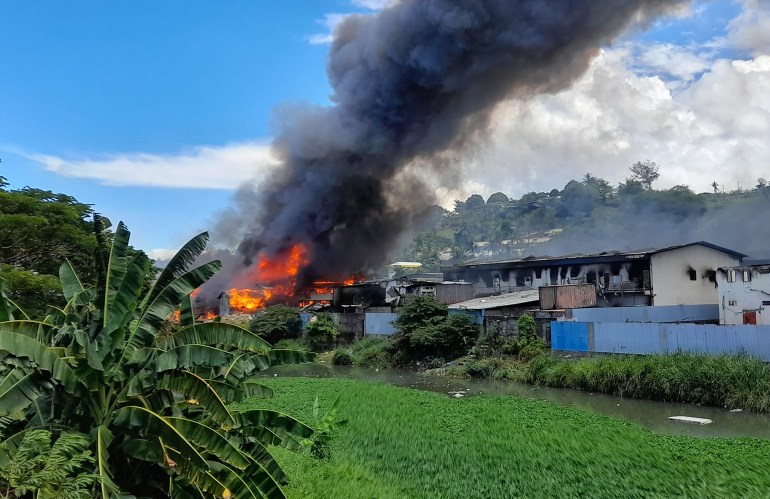 Flames rise from buildings in Chinatown in the Solomon Islands’s capital city of Honiara on November 26, 2021. A government-imposed curfew has done little to deter protesters who want the Prime Minister to resign [Charley Piringi/AFP]

The Solomons were among a dozen Pacific islands that recognised Taiwan until the 2019 decision, with Taipei accusing Beijing of using “dollar diplomacy” to pressure countries into cutting ties with the self-ruled island.

“The scenes here are really chaotic. It is like a war zone,” Aqorau told the Reuters news agency by telephone. “There is no public transport and it is a struggle with the heat and the smoke. Buildings are still burning.”

The first Australian police officers arrived in the country on Friday, after Sogavare requested help.

The Solomon Islands, which lie east of Papua New Guinea, have struggled with unrest and political violence since gaining independence from Britain in 1978.

Rivalry between the most populous island Malaita and the Guadalcanal-based central government has repeatedly led to clashes, with Malaita complaining that it has been neglected.