‘Unwavering’: Harris stresses US commitment to the Philippines

US Vice President will also visit Palawan on the edge of the South China Sea as the Philippines reported an incident involving the Chinese coastguard.

Vice President Kamala Harris has reiterated the United States’ “unwavering” commitment to the Philippines during a visit aimed at rebuilding ties tested during the Duterte years, and countering China’s growing influence in the region.

Harris is the highest-ranking US official to visit Manila since President Ferdinand Marcos took power in June. She arrived in Manila as the Philippine military revealed a Chinese coastguard ship had on Sunday “forcefully retrieved” a floating object that was being towed by a Philippine vessel in the South China Sea, by cutting a line attaching it to the boat.

“We stand with you in defence of international rules and norms as it relates to the South China Sea,” Harris told Marcos at the start of talks in the presidential palace in Manila.

“An attack on the Philippine armed forces, public vessels or aircraft in the South China Sea would invoke the US mutual defence commitment … that is our unwavering commitment to the Philippines.”

The Philippines is one of a number of Southeast Asian nations with a claim to the South China Sea.

Beijing claims the waterway almost in its entirety and has become increasingly assertive in recent years, creating artificial islands and developing military bases.

Harris is due to visit Palawan, an island on the edge of the South China Sea, during her three-day visit to the Philippines and will also reaffirm Washington’s support for a 2016 international tribunal ruling that rejected China’s expansive claim to the waters, a senior US official said. Beijing has refused to accept the ruling.

The US has had a long and complex relationship with the Philippines and the Marcos family. Marcos’s dictator father ruled the former US colony for 20 years with the support of Washington, which saw him as a Cold War ally.

Relations between the two countries soured when Duterte became president, however. In 2016, Duterte called Barack Obama a “son of a whore” over warnings he would be questioned by the then US president over his controversial drug war in which thousands have been killed. 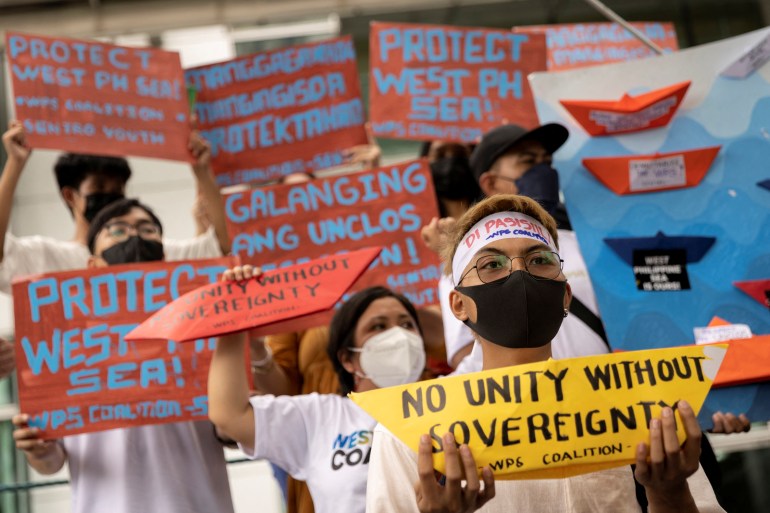 China has ignored a 2016 international court ruling that its claims to the South China Sea had no legal basis [File: Eloisa Lopez/Reuters]

Washington is now seeking to bolster its security alliance with Manila under his successor.

Marcos said he did not “see a future for the Philippines that does not include the United States”.

That includes a mutual defence treaty and a 2014 agreement, known by the acronym EDCA, which allows for the US military to store defence equipment and supplies on five Philippine military bases, and allows US troops to rotate through those bases.

The US and the Philippines have expressed support for accelerating EDCA’s implementation as China becomes increasingly assertive.

On Sunday, Vice Admiral Alberto Carlos, commander of the Western Command (WESCOM), said Philippine authorities had sent a vessel to examine an object seen floating in the South China Sea early on Sunday about 730 metres (800 yards) west of Thitu Island.

The team tied the object to their boat and started towing it before a Chinese coastguard vessel approached and blocked their course twice before deploying an inflatable boat that cut the tow line, then took the object back to the coastguard ship, the statement said without elaborating on the object or why China might have taken it.

China’s embassy in the Philippines did not immediately respond to a request for comment.

Thitu, known to Filipinos as Pagasa, is close to Subi Reef, one of the seven artificial islands in the Spratlys on which China has installed surface-to-air missiles and other weapons.

Thitu is one of nine features that the Philippines occupies in the Spratly archipelago and is the Southeast Asian country’s strategically most important outpost in the South China Sea.

The Philippine foreign ministry said in a statement it would conduct a thorough review of the incident and was awaiting detailed reports from maritime law enforcement agencies.