Brittney Griner appeared at a brief hearing and is charged with drug smuggling, which carries a sentence of up to 10 years.

US basketball star Brittney Griner, who is in detention in Russia on drug charges, will go on criminal trial on July 1, a court said on Monday.

Griner, a two-time Olympic gold medallist and a champion in the Women’s National Basketball Association (WNBA), was detained at Moscow’s airport in February after she was allegedly found carrying vape cartridges with cannabis oil in her luggage.

At a brief preliminary hearing at which Griner appeared more than four months after her arrest, the Phoenix Mercury player was charged with drug smuggling and informed of a possible sentence of up to 10 years. The maximum sentence applies to “large-scale transportation of drugs”.

The court in the Moscow suburb of Khimki extended Griner’s detention for another six months. Photos obtained by the AP showed her appearing in handcuffs. Griner had previously been ordered to remain in pre-trial detention until July 2.

Fewer than one percent of Russian criminal cases are acquitted, and unlike acquittals in the US, those in Russia can be overturned. 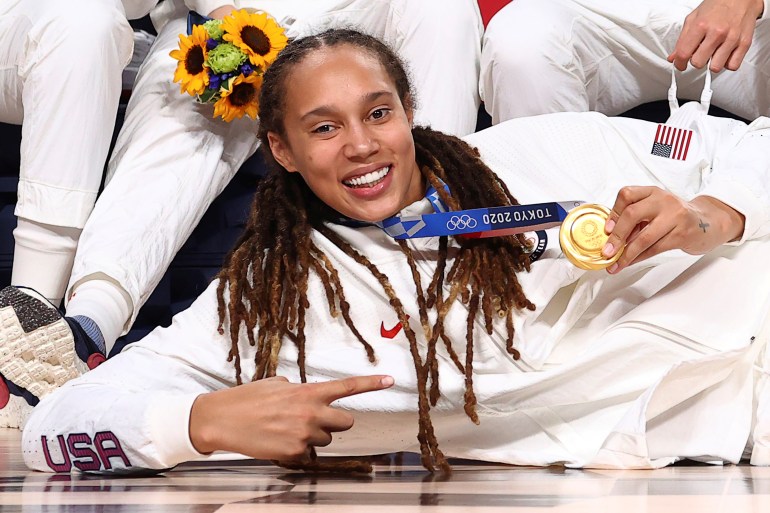 Brittney Griner, an Olympic gold medalist, travelled to Russia in the WNBA off season to make money playing basketball there [File: Brian Snyder/Reuters]

Griner, 31, was at the airport to board a flight back to Phoenix at the outset of the WNBA’s training camp. She, like other WNBA players, has spent several off seasons playing professionally in Russia because of the higher salaries there.

Washington says that Russia has “wrongfully detained” the basketball star and turned her case over to the US special envoy in charge of hostages.

That move has drawn additional attention to Griner’s case, with supporters encouraging a prisoner swap like the one in April that brought home Marine veteran Trevor Reed in exchange for a Russian pilot convicted of a drug trafficking conspiracy.

Russian news media have repeatedly raised speculation that Griner could be swapped for Russian arms trader Viktor Bout, nicknamed “The Merchant of Death”, who is serving a 25-year sentence on conviction of conspiracy to kill US citizens and providing aid to a “terrorist” organisation.

Russia has agitated for Bout’s release for years. But the discrepancy between Griner’s case — allegedly having vape cartridges containing cannabis oil — and Bout’s global dealings in deadly weapons could make such a swap unpalatable to the US.

Others have suggested that Griner could be traded in tandem with Paul Whelan, a former Marine and security director serving a 16-year sentence on an espionage conviction that the US has repeatedly described as a set-up.

Relations between the US and Russia are at a low point, and US President Joe Biden’s press secretary said last month that tensions with the Kremlin present challenges in any attempt to negotiate Griner’s release.

“I have got no higher priority than making sure that Americans who are being illegally detained in one way or another around the world come home,” US Secretary of State Antony Blinken said on Sunday in a televised interview. “I can’t comment in any detail on what we’re doing, except to say this is an absolute priority.”

The WNBA has also said it is working to bring Griner home. She is considered among the greatest female basketball players and is a high points scorer.

The WNBA announced Griner would be a ceremonial All-Star in 2022.