US must put ‘brakes on the Israelis’ as violence rises: Activists

US President Joe Biden has pledged to take a rights-based approach to US foreign policy.

But as Israeli air raids pummel the Gaza Strip, killing more than two dozen Palestinians in the besieged coastal territory, Palestine advocates say Biden is failing to apply that standard to Israel – and without US pressure, Israel has little incentive to change its stance.

Phyllis Bennis, an analyst at the US-based Institute for Policy Studies, said that “as long as the US is not prepared to hold Israel to account”, any statements from the Biden administration about the ongoing violence would not lead to a de-escalation.

“We keep hearing from President Biden that he wants a foreign policy that’s based on human rights. What we are not seeing is any actual commitment to human rights – and certainly in this case, there’s no willingness to use political capital,” Bennis told Al Jazeera in an interview.

The Israeli raids on Gaza come after weeks of mounting tension over the looming forced displacement of several Palestinian families from Sheikh Jarrah, a Palestinian neighbourhood in occupied East Jerusalem that Jewish settlers have been trying to expel them from for decades.

The situation escalated when Israeli police stormed Al-Aqsa Mosque in Jerusalem’s Old City – the third-holiest site in Islam – and injured hundreds of Palestinian worshippers during several days of violence. Protests broke out across the occupied territories and inside Israel. The Palestinian faction Hamas, which governs Gaza, launched rockets towards Israel.

Israeli Prime Minister Benjamin Netanyahu late on Tuesday said Hamas and Palestinian Islamic Jihad would “pay a very heavy price for their belligerence” and said Israel was “at the height of a weighty campaign”. Hamas pledged to respond should Israel continue its air raids.

The Biden administration, which took office in late January, had made clear that the Israeli-Palestinian conflict is low on its list of priorities amid other pressing issues at home and abroad.

But Yara Asi, a non-resident fellow at Arab Center Washington, DC and a post-doctoral scholar at the University of Central Florida, said that when the US funnels $3.8bn in military aid to Israel annually and provides diplomatic and political cover to the Israeli government in international arenas such as the United Nations, it is “disingenuous” for Washington to try to be disengaged.

“There is no more intimate external actor outside of Israelis and Palestinians than the United States, and this has been the case for decades – and it is continuing,” she told Al Jazeera.

“You don’t just get to not appoint an ambassador to Israel and say, ‘well we’re de-prioritising’. It’s far too late for that. It’s really just tacit acceptance of what’s happening. In a way, the US is supporting everything that’s happening.” 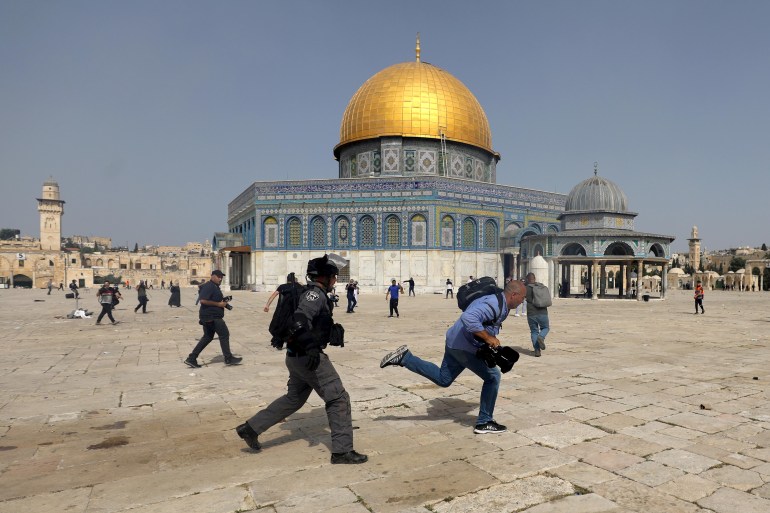 Israeli police repeatedly stormed the Al-Aqsa Mosque compound in Jerusalem over the past several days, driving tensions across the occupied Palestinian territories [Ammar Awad/Reuters]As the violence continues to unfold, the Biden administration has put out a series of statements urging a de-escalation. But observers have criticised the US government for failing to recognise the asymmetry in power between Israel and the Palestinians and they are urging Biden to do more.

On Tuesday, US State Department spokesman Ned Price called for restraint and calm. “Israel has the right to defend itself and to respond to rocket attacks; the Palestinian people also have the right to safety and security, just as Israelis do,” he said during a news briefing.

Price had been criticised for urging “Israeli and Palestinian officials to act decisively to de-escalate tensions and bring a halt to the violence” in Jerusalem on May 7, the same day that Israeli forces stormed Al-Aqsa Mosque.

Analysts pointed out that Israel, which occupied East Jerusalem in 1967 and unilaterally annexed it in 1980, is the only authority in the city.

Palestinian rights advocates also slammed Price for failing to say that Palestinians have a right to self-defence when pressed by reporters during a State Department briefing on Monday. After a back-and-forth discussion, Price eventually said: “I’m not in a position to debate the legalities from up here. Our message is one of de-escalation.”

Khaled Elgindy, the director of the programme on Palestine and Palestinian-Israeli affairs at the Middle East Institute, a think-tank in Washington, DC, told Al Jazeera that the exchange on Monday highlighted the fact that decades-old US government talking points are not working any more.

“The disconnect between the talking points and the reality is just too great,” he said.

The Biden administration appears to have believed it would come into office, “reverse some terrible Trump policies, leave some others in place, and then put the whole thing on the shelf and forget about it”, Elgindy said.

“But you can’t forget about it because there’s an occupation and a blockade and those things aren’t static … There’s no stalemate; it’s just getting worse for Palestinians. To not expect the things to blow up is naive, because they always do.”

Meanwhile, Palestine advocates held protests outside the US State Department in Washington, DC, on Tuesday afternoon to demand the Biden administration prevent the forced expulsions of Palestinian families from their homes in East Jerusalem.

Laura Albast, an organiser with the Palestinian Youth Movement, one of the groups involved in the demonstration, also said a petition with more than 200,000 signatures was sent to Secretary of State Antony Blinken, urging him to stop the forced displacement.

“We send billions of dollars in taxpayer money to Israel to fund the military,” Albast told Al Jazeera in a phone interview on Tuesday afternoon. “Why is Israel the exception when it comes to human rights abuses?”

Elgindy said it is critical for the Biden administration to intervene now to stave off more violence in Gaza – or the situation could devolve into a repeat of horrific past Israeli military offensives in the Palestinian territory, such as one in 2014 that left more than 2,000 Palestinians dead.

“It’s really important for this administration to do everything it can to prevent that from happening,” he said, “and that means putting the brakes on the Israelis.”