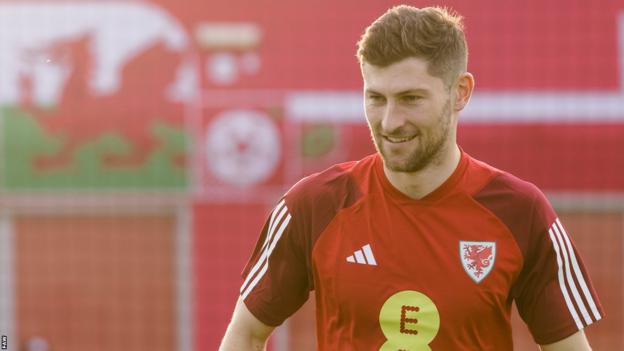 Ben Davies says Wales have ambitions of achieving "something special" in Qatar as they prepare to play their first World Cup game since 1958.

Davies, 29, was part of the Wales side who ended a 58-year absence from major tournaments by qualifying for the past two European Championships, reaching a historic first semi-final in 2016.

Wales face the United States in Doha on Monday in their World Cup opener.

"It's a success for us just to qualify for a World Cup," said Davies.

"But that doesn't mean we don't have a lot of ambition to do something special in this competition.

"There's a similar feeling now, a new feeling for us facing teams we've not played against before."

'In my DNA': Page and the valleys football factoryVote - Who is Wales' greatest male footballer?Wales fans' rise from counterculture to mainstreamSaint, Galactico, Welsh hero: Bale's evolution

Tottenham Hotspur defender Davies was speaking at Wales' training base in Doha, in what was the first World Cup news conference to be held in Welsh in the competition's 92-year history.

"It's a fantastic feeling to be a part of this squad and have the chance to travel around the world and show the best of Wales," he said.

"It's a really special feeling. We're trying to show the best of Wales and everyone will wear the shirt with pride."

Legendary former Brazil captain Cafu has also been giving the language a try. The two-time World Cup winner has appeared in a sponsor's video speaking a little Welsh and wearing the kind of red, yellow and green bucket hat which has been popularised by Wales fans at games in recent years.

"I saw the video and it's class," Davies said.

"It's strange to see someone like Cafu wearing a bucket hat and trying to speak a bit of Welsh, but it's great, and it shows we're doing all the right things on and off the pitch."

Wales have been drawn in Group B alongside the USA, England and Iran. In terms of average world ranking, it is the toughest group of the competition.

As a Tottenham player representing Wales at a World Cup, Davies will follow in the footsteps of former Spurs wingers Cliff Jones and Terry Medwin, two of the three surviving members from Wales' 1958 team who reached the quarter-finals.

"It is always a proud moment to play for Spurs and, to be honest, the best feeling of all is wearing the Wales shirt," Davies added.

"We've done the Euros so what's the next step we can take? By reaching the World Cup and to have the chance of doing something special, that's a feeling which is difficult to describe."