Wales' magic moments run out for Bale and Ramsey

When Wales manager Robert Page, disconsolate after his side's World Cup defeat by Iran, bemoaned that this was one of the games when they could not "carry one or two players if they have off days", it was not difficult to work out who he meant.

Gareth Bale and Aaron Ramsey are two giants of Welsh football, architects of this golden era which has brought their country two European Championships and a first World Cup for 64 years.

Bale, the nation's captain, all-time leading scorer in men's football and now its most capped male player with 110 appearances, is by most people's reckoning the greatest player ever to come from Wales, while Ramsey is not far behind in the rankings.

But during Friday's defeat against Iran - which leaves Wales staring at group-stage elimination in Qatar - these two stellar talents were reduced to near bystanders.

"You can carry one or two players if they have off days but, when the majority of the team are not quite at it, there's only going to be one outcome unfortunately."

As was the case in Wales' opening draw with the United States, much of this encounter passed Bale and Ramsey by.

At 33 and nearly 32 years old, neither has been playing regularly for their clubs in recent seasons and, against Iran, that inaction caught up with them.

"That's the problem we always have, asking players who are not playing for their clubs to come and give performance after performance," Page added.

Bale and Ramsey have had quiet matches in the past, only to come alive at the most important moments. Think Bale's penalty against the USA or his free-kick in the play-off final win over Ukraine - both conjured during matches in which he was otherwise well short of his best.

The problem for Wales against Iran - one of their many problems, in fact - was that those magic moments finally ran out.

Both Bale and Ramsey looked tired, struggling to cope with the pace of the game and, on the rare occasions they got the ball, they were unable to do much with it.

They were not helped by Page. Despite saying "lessons had been learned" following the draw against the USA, he chose virtually the same team - striker Kieffer Moore was the only change - and in the same 3-5-2 formation, which did nothing for Bale or Ramsey. 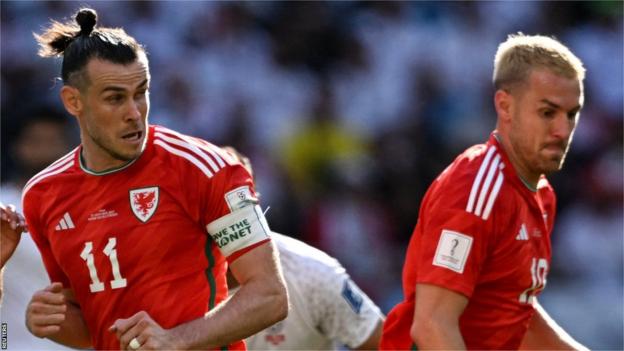 Bale was isolated in attack, while Ramsey was required to sit deeper than he would have liked in the same central midfield trio which had been outplayed by their American counterparts four days earlier.

Ramsey could not curb his natural attacking instincts and, as he pushed forward to try and force the winning goal Wales so desperately craved, he left gaps behind him which Iran exploited.

"I always take responsibility, that's my team. The sending-off didn't help of course, but at that point we had five forwards on the pitch so couldn't get a defensive shape."

This result was by no means only the fault of Bale, Ramsey or Page - but it felt symbolic that these two iconic players' powers had deserted them at this pivotal moment for Wales.

Bale and Ramsey ended the game with the worst ratings of all Wales players by BBC Sport readers, while social media was awash with criticism.

No amount of sporting disappointment could diminish their legacies as Welsh legends, but it was almost impossible not to wonder in Doha whether or not we were watching the beginning of the end of their illustrious international careers.

Asked if that was the case, Page said: "I don't want to talk about that because we've got to prepare for another game against England, a local derby to finish off with."

That final group game presents Wales with a tall order: win against their fancied opponents - who they have not beaten since 1984 and are now being tipped by some as World Cup contenders - and then hope that the result of Tuesday's other game between the USA and Iran also goes their way.

The last time Wales faced England at a major tournament, Bale scored with a signature free-kick which put his side ahead in a Euro 2016 group-stage encounter.

Wales ended up losing that game in Lens, but hit back with victory over Russia to win the group and set in motion a momentous journey to a historic first semi-final.

This time, such a grand comeback looks out of the question. Even with Bale and Ramsey in their ranks, for Wales, the magic moments seem to have run out.