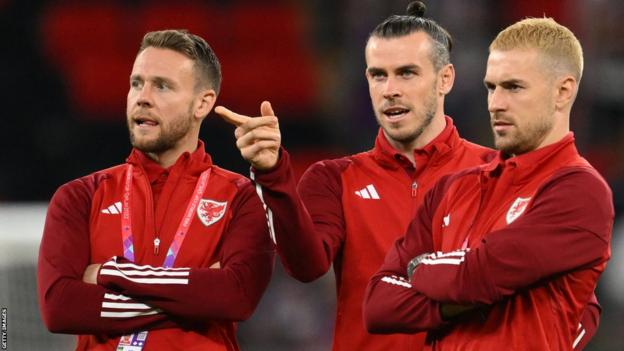 No players have been substituted yet

No players have been substituted yet

Mehdi Taremi (IR Iran) wins a free kick in the defensive half.

Saeid Ezatolahi (IR Iran) wins a free kick in the defensive half.

Lineups are announced and players are warming up.

Wales face Iran in a crucial second World Cup match knowing victory would significantly enhance their chances of reaching the second round in Qatar.

Robert Page's side started with a 1-1 draw against the United States, while Iran were thrashed 6-2 by England.

"It's an amazing achievement, it's an honour to represent my country so many times," said Bale, who has 109 caps.

"But it's more important that we try and get the victory. Hopefully we can and it'll make it even more special.

"It will be a difficult game versus Iran - they are a very good team. They are here for a reason, but of course we believe we can beat them."

Bale, 33, is already Wales' all-time leading scorer in men's football and he extended his record to 41 goals with a late penalty against the USA on Monday.

That match at the Ahmad Bin Ali Stadium, also the venue for the Iran fixture, was Wales' first in a World Cup since 1958.

They seemed to be overawed by the magnitude of the occasion during a first half in which they were outplayed by the USA, but Page's men were much improved after the break and were well worth their point.

Wales cannot afford to start so slowly against Iran, who they must beat to have a realistic chance of reaching the last 16, with Group B favourites and early leaders England to come in their third and final group game on Tuesday.

"Iran are going to want a reaction from a disappointing defeat," said Page.

"I think they'd have looked at the fixtures and England was a free game for them. I think that's why the manager changed the shape, he changed it for that game. I think we won't be too surprised by the formation he picks. Both teams need to win."

As Page suggests, this is also an important match for Iran, who will almost certainly be heading for group-stage elimination if they suffer a second defeat from two.

Carlos Queiroz's side had kept clean sheets in six of their previous nine matches before they were crushed by a rampant England side on Monday.

"For us, the World Cup starts tomorrow [Friday]. We have two games and six points to play for," said Queiroz, a former Real Madrid manager and ex-assistant to Sir Alex Ferguson at Manchester United.

"Welcome to the big show for Wales after 64 years. It is incredible to see the Red Wall in the stadium.

"Wales play with character. It's like a party. A football party show."

Page says Wales midfielder Joe Allen is "fit and raring to go" after a hamstring injury which has kept the Swansea City player out since September.

Having trained alone since Wales arrived in Qatar, Allen joined the rest of the squad for Wednesday's session.

"To have him available is a massive boost for us with two games remaining," said Bale.

"Hopefully he can come on or start and he'll do what Joe Allen does best and cover every blade of grass."

Other than a "few tired bodies" following the opening draw against the USA, Page says his squad is fully fit.

Striker Kieffer Moore is in contention to start after a game-changing performance as a half-time substitute against the States.

Iran goalkeeper Alireza Beiranvand will miss the match after getting concussed and breaking his nose against England.

Queiroz said: "There is medical protocol we need to respect and there is no way to move around the protocol, so he will not play."