What are the global implications of India’s second COVID wave?

However, medical experts say the real numbers across the country of 1.35 billion may be five to 10 times higher than the official tally.

The steep climb in infections in the first week of April, when for the first time India surged past 100,000 cases, was indicative of an impending disaster.

In a matter of weeks, India descended into a COVID-19 hell as visuals of dead bodies lined up outside crematoriums, unending funeral pyres and burials emerged from its major cities and towns. 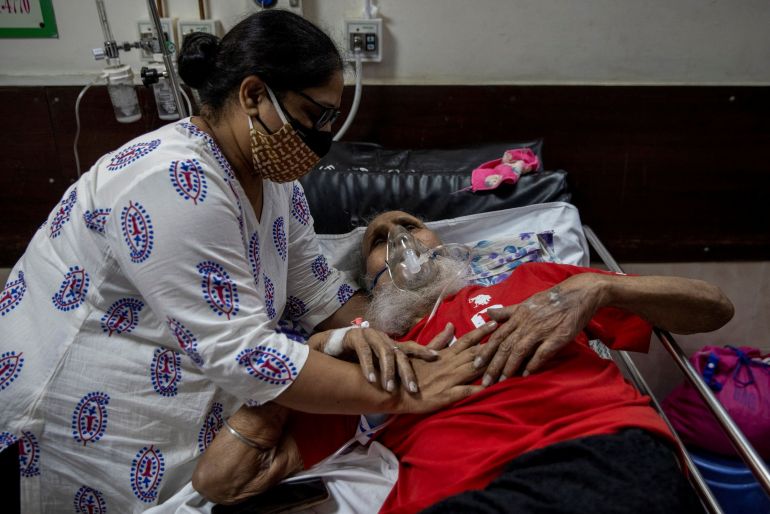 A COVID patient is comforted by his daughter as he receives treatment at a hospital in New Delhi [Danish Siddiqui/Reuters]The ongoing healthcare crisis is rapidly moving to smaller towns and villages where people are dying for lack of oxygen, hospital beds and lifesaving drugs, just like in the big cities.

The second wave is largely attributed to a contagious mix of coronavirus variants spreading in different parts. Two variants, the UK variant (B1.1.7) and the Indian variant (B.1.617), are largely blamed for the current spate of infections.

As evident from the mayhem caused by the UK variant in India, the emergence of an Indian variant sent ripples of concern across the globe.

The Indian variant, which is suspected to be highly infectious, could snowball into a global problem – according to the WHO, it has already spread to at least 17 countries.

“No place is really safe and that is why the world is so concerned,” says India’s leading virologist, Shahid Jameel.

The disastrous new chapter of the pandemic in India threatens not just its safety but puts the entire world at risk.

Since December last year, several variants have been spreading across the country.

It is also present in Uttar Pradesh and Indian-administered Kashmir, in different proportions.

In the east, a different story unfolds.

“Our analysis shows that every possible variant is in West Bengal,” says Jameel.

A long-drawn assembly election in West Bengal, with mega election rallies led by political leaders including Prime Minister Narendra Modi, is believed to have turned into multiple “super-spreader” events.

While the state witnesses a spike in cases, the true scale of the spread in West Bengal will be visible in the weeks to come, say experts.

According to Jameel, West Bengal has the UK and the Indian strains as well as the South African variant (B.1.351) in small proportions.

“Vaccines have less effect on this (South African) variant and how it came into Bengal remains a mystery,” says Jameel.

The state also discovered another variant, B.1.618, a new lineage of the Indian variant with a mutation characteristic of the highly transmissible South African and Brazilian (P.1) variants.

The WHO lists three variants, first found in the UK, South Africa and Brazil, as “variants of concern” while the Indian variant remains a “variant of interest”.

Some, however, caution about putting the blame solely on variants and ignoring the lack of public health measures that lead to the surge. 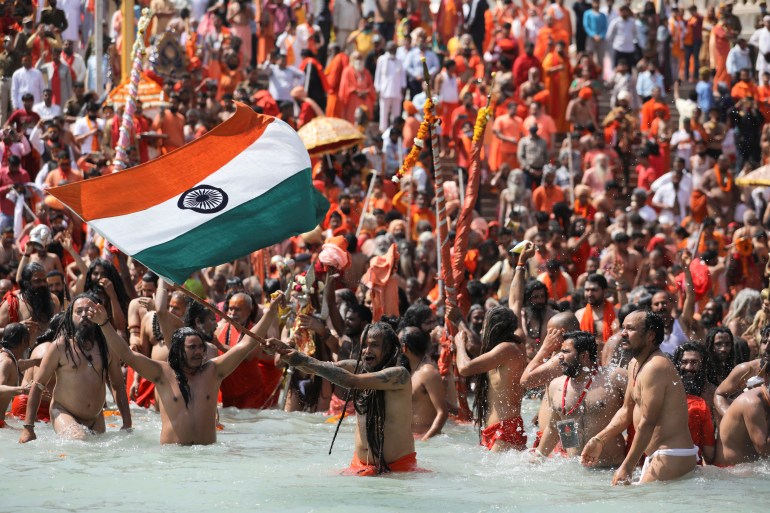 A Hindu waves the Indian flag as he takes a dip in the Ganges river during the Kumbh Mela in Haridwar, Uttarakhand [File: Anushree Fadnavis/Reuters]

Threat of the mutants

In a larger pool of infections, the likelihood of mutations increases.

“Each time a wave or a spread occurs, the main strain that is spreading will keep changing,” says T Sundararaman, global coordinator of the People’s Health Movement and a former executive director of the National Health Systems Resource Centre.

“But so far, none of the variants have shown the capacity of immune escape,” he says. Immune escape is when a human body fails to respond to an infectious agent, in this case, a variant.

In a new study, researchers found that the more transmissible Brazilian variant was able to escape the body’s immune response built by a previous infection from a different variant.

The Brazilian variant has spread across Latin America, causing deaths and hospitalisation even in countries with high vaccination rates.

Similarly, in February, South Africa halted the rollout of the Oxford-AstraZeneca vaccine (Covishield in India) after a trial showed that it offered “minimal protection” against mild and moderate cases of the South African variant.

Sundararaman told Al Jazeera that if the spread continues in India, “variants of deadly potential which have immune escape properties” can spread and cause further waves in countries such as Chile, despite having high immunisation.

“If we do not eliminate it, the pandemic can be a recurrent affair across the world for a long time,” says Sundararaman.

According to Jameel, the incubation period (time between infection and symptoms) of the coronavirus is about two to three days or sometimes even longer.

“The world is really shrunk now because of the speed of international travel. Any virus present anywhere can go to the other even before you get sick,” said Jameel.

The N501Y mutation, associated with higher transmissibility and lethality, had been found in three “variants of concern” – the UK, South African and Brazilian – but not detected in the Indian variant earlier.

Border restrictions, she wrote in The Guardian, cannot stop new variants but can slow the spread to give scientists time to determine the risk level posed by the variants on the population of the country.

Border restrictions have worked for several countries, such as New Zealand, Taiwan, South Korea and Singapore, helping them contain the spread and emergence of any variant.

Vietnam, which shut down its borders in March last year, managed to limit the death toll to 35 and grow its economy.

A global pandemic is everyone’s problem and requires a global response.

“If we really want the pandemic to be over, we not only have to vaccinate at home but vaccinate everywhere. This is the only way to prevent the emergence of variants that could escape our immunity, or affect children more severely,” Sridhar wrote.

Unlike the first wave last year, hospitals are witnessing more young adults and children being brought to the emergency.

Earlier this month, Delhi Chief Minister Arvind Kejriwal revealed that more young people were getting infected, saying that “more than 65 per cent of the patients are below 45 years of age”.

“We saw the same with B1.1.7 in the UK. This may be driven by variants that transmit more easily and cause more severe disease in all individuals, but we will need more data,” said Gala. 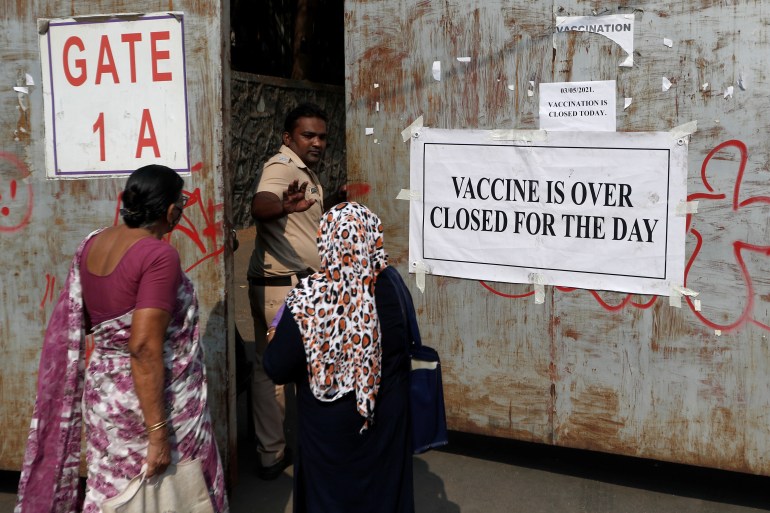 A policeman asks people who came to receive a dose of COVID-19 vaccine to leave at a vaccination centre closed due to unavailability of the jab, in Mumbai [Francis Mascarenhas/Reuters]Experts, especially in Western countries, are concerned about such a variant reaching their shores where, despite high immunisation in the older generations, the younger population remains at risk as they await their turn for vaccines.

India, which was supposed to help vaccinate other countries, now struggles to vaccinate its own.

Early this year, India launched an ambitious vaccination plan starting with the inoculation of 300 million Indians by summer. The country also sent more than 60 million doses of the Covishield and the domestically developed Covaxin vaccines to several countries as well.

On May 1, India opened up vaccination for everyone between the age of 18 to 45 but struggles to supply the doses required to meet the demand. Several states have come out to say that they are forced to defer the vaccination drive because they lack the shots.

“India was going to supply 50 percent of the world’s vaccines this summer and a lot of it were going to go to low and middle-income countries. Now the vaccines will be for domestic use,” says Jameel. This raises concern over the global demand for vaccines, especially in lower-income countries, that India was supposed to meet.

With India reaching out to the world, many countries have rallied to help the crisis-hit country.

India has received oxygen from Germany, Taiwan, the UK and several countries in the Middle East, among others. On May 1, it received the first consignment of Russia’s Sputnik V vaccine, which was granted emergency use approval by Indian regulators two weeks ago.

The United States, after much pressure, will ease its embargo of raw materials for vaccines and send testing kits, protective gear, oxygen cylinders and ventilators.

Experts suggest that help with supplies might not be enough and the situation would require waiving vaccines patents, transfer of technology, technical expertise and on-the-ground manpower for mass vaccination.